Mumm Napa and the World Champion San Francisco Giants teamed up to create two new Napa Valley sparkling wines. What better way to celebrate the best team in baseball than with a bottle of bubbly or better yet two? The perfect pairing between one of the oldest teams in Major League Baseball and one of California’s top sparkling wine producers has expanded in more ways than one.

Mumm Napa wines will be featured at tastings during select games, in the ballpark at special events throughout the season, and during team celebrations. Every Giants player will receive a bottle of the Championship Brut with a one-of-a-kind etched label featuring their number and name. The new super-premium sparkling wines are licensed by Wine by Design, the official wine licensee for Major League Baseball Properties.

Wine Oh TV’s Monique Soltani attended the Sparkling Wine Release Party at AT&T Park where she gets to the bottom of the bubbly with Mumm Napa Winemaker Ludovic Dervin and San Francisco Giants Manager Bruce Bochy. In this video, she shows us why America’s favorite pastime just got a whole lot better.

“Mumm Napa has been the celebratory sparkling wine of choice for both our 2010 and 2012 World Series Championships.We are pleased to extend this relationship with Mumm Napa to our fans in 2013, with the creation of these unique Giants wines.” 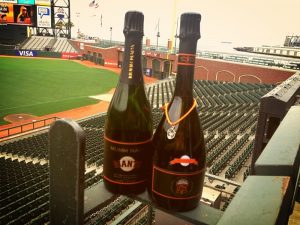 Giants Brut Prestige ($27) will be more widely available throughout the baseball season. As the name suggests, this wine is a special bottling of Mumm Napa’s Brut Prestige, the winery’s quintessential Napa Valley sparkling wine. The Giants have had a long standing love for Brut Prestige: during last year’s playoff series and World Series Championship, they celebrated each series win with the wine and now it has become the official sparkling wine of the team.

Championship Brut ($125) is a onetime run, limited edition release of only 2,012 bottles created to celebrate the Giants’ 2012 World Series win. A prestige cuvée, or top bottling, the wine comes from specially selected lots from the winery’s best vineyards in the Napa Valley.