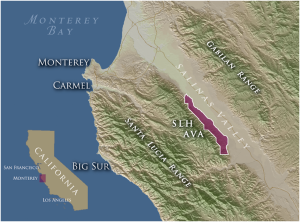 Each May, the world gets a chance to taste the finest wines from one of America’s most acclaimed wine regions: the Santa Lucia Highlands (SLH) of Monterey.

The annual Gala, put on by the Santa Lucia Highlands Wine Artisans is a chance for loves of Chardonnay, Pinot Noir, Syrah and a smattering of sparklings, Pinot Gris and rosés, to indulge in the phenomenal food and wines of the region. This year marked the 10th annual SLH Gala, once again held at Mer Soleil on River Road. 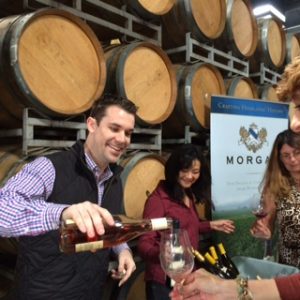 The late Jerry McFarland, the first to install significant plantings of Burgundian varieties here in the early 1980s, predicted the Monterey-Carmel area would become the most highly sought after wine and food destination on the planet. He was surely onto something.

If he could only see how his vision is finally coming true. Wife, Stephanie, carries on his legacy, with the J. McFarland Tribute Chardonnays and Pinot Noirs, named in his honor, and priced for everyone to enjoy.

Grab a glass of something from the Santa Lucia Highlands and let’s cruise the standouts.

2014 August West, Peterson Vineyard Pinot Noir ($48): Characteristic aromas of caraway and sausage combine with superb zesty flavors of raspberry and rhubarb, making this wine as focused and poised as a Caterham 7.

2014 Brack Mountain “Matias” Sierra Mar Chardonnay ($50): Subtle yet sensational lemon cream pie with salty macadamia nut rendition from this newcomer to the SLH Gala, named for a son of one of the founding partners in this overall 50k case operation.

2013 Bruliam Soberanes Vineyard Pinot Noir ($48): Fermented in large wooden puncheons by winemaker Kerith Overstreet, this was hands down one of the most inviting and gratifying strawberry rhubarb pie and plum pudding spiced Pinots of the day.

2012 La Rochelle Rosella’s Vineyard Pinot Noir Reserve ($80): Winemaker Tom Stutz thinks this is the best Pinot he’s ever made from this vineyard, and one sip will wow you with its velvety voluption of raspberry ganache fudge.

Tom also previewed their late disgorged Blanc de Noirs, from 2008, a glorious way to capture the elegant side of a non-ideal winegrowing year. A full line of sparklers will begin to make their debut late this year.

2014 Lucia Soberanes Vineyard Chardonnay ($60): From the rockiest part of this vineyard farmed by Mark Pisoni and Gary Franscioni, this mouthwatering explosion of lemon curd, pineapple, almond and mandarin zest takes you by storm.

2012 Mansfield-Dunne, Peterson Vineyard ($48): A walk in the fall woods on a brisk day, this is captivating Pinot Noir, a discovery of pomegranate, red cherry, porcini mushrooms, fern and chervil.

2015 Morgan Rosé, Lee Family Farm ($18): Nothing like a snappy rosé to elevate a summer meal and this saigneé of 100% Pinot Noir from the Double L vineyard is a chilled strawberry-watermelon burst of pure, mouthdrenching refreshment.

2014 Manzoni Pinot Gris, North Highlands Cuvée ($23): The perfect alternative to Chardonnay when you want a wine as spritely as a spinnaker at full sail on sparkly waters, filled with Granny Smith apple, white peach, creamy pear and breezy-fresh acidity.

2014 Odonata Grenache, SLH ($28): Eschew your notions of light and lively, red-headed cheerleader notions of Grenache and get ready for a dark-plum jerseyed, well-tanned (and muscled) polo player at full gallop astride a mahogany steed.

Thanks once again to the Wagner family for making their spectacular Mer Soleil barrel room available for this annual celebration, and to all the restaurants who provided a bounteous spread of food, including Basil (lobster waffles!!) La Balena (whole roasted hog), Lucia at Bernardus (duck paté), The Clement/’C’ Restaurant, Monterey Plaza Hotel, Ocean Sushi, Poke Lab and Tarpy’s Roadhouse.

Also kudos to Chef’s Palette Spice Rubs by Chef Dyon Foster (who did the food for the Friday pre-Gala dinner at Hahn – not to be missed next year), and to Schoch Family Farmstead and Michael Burke of Star Market for the championship displays of cheese.

Special thanks to Dave Muret, who tirelessly organizes these events each year, along with assistance from many volunteers, including the 2016 Josh Lee Award recipient, Jason Auxier of Morgan Winery.