12 Things to Know About Port Wine and the Douro Valley 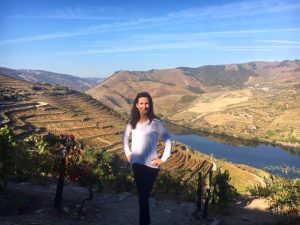 After spending 5 days in Porto and the Douro Valley, I think I finally have a good grasp on what makes port wine so special.

I will admit, I didn’t know much about port wine even though I’ve attended many tastings and spoke with producers here in San Francisco and having served port (apparently all wrong) for many special occasions. 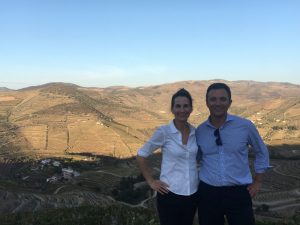 The Douro Valley is truly one of the most spectacular wine regions I have ever seen. The views are enchanting, the river is ever present, and the grapevines are a work of art.

The walled terraces go back hundreds of years and are so spectacular that they are classified as a UNESCO as world heritage site.

The Douro is an extremely dry region, but when it rains it brings with it a force that can erode the mountain side. Since the vineyards are within the mountain they need to be protected. They are protected by these walled terraces. 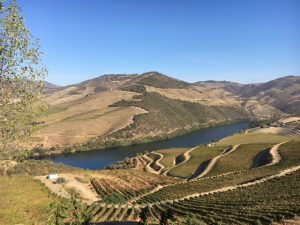 The AEVP invited me and two other journalists on a harvest press trip, but when we arrived harvest had already taken place. 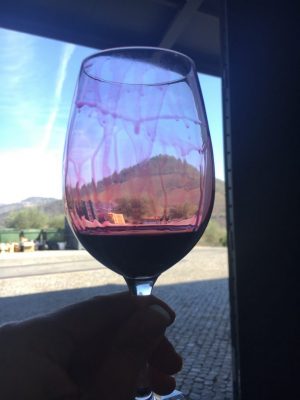 They also believe that 2017 will be a “vintage year” which pretty much means the best year. Not all years are declared a vintage year, only the best. I got a chance to taste some 2017 from the tank and I can agree the juice was tasting mighty fine. The details of what makes port such a special wine can be summed up into a few simple factors: the people, the place, and of course the grapes.

I can’t get into the rules and regulations of what it takes to produce port. Frankly, they are far too complicated and I don’t really think you would care.

With that in mind, below you will find 12 Things to Really Need Know About Port Wine and the Douro Valley!

1. You are drinking your Port Wine all wrong 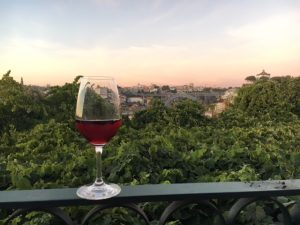 First things first, you know that port glass the size of a thimble you have buried somewhere in your kitchen cabinets?  THROW IT OUT! Making wine in Portugal is one of the hardest places to produce wine in the world. They are literally putting time in a bottle.

The investment of time, money, and hard work makes port wine one of the most elegant and expensive in the world. This well made wine is worthy at the very least of a white wine glass.

I also learned, you are serving your port WAY too warm. Producers in Portugal have long been putting their bottles of port wine in the fridge when they serve their wine to their family and friends. About five years ago, they started sharing this tradition with wine consumers. 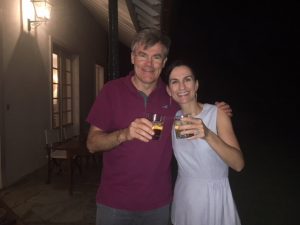 Why the big chill? Serving a glass of port at room temperature (or worse higher) brings out the alcohol in the wine which will be the first thing you taste. It can also oxidize the wine.

Chilling the port wine will bring the fruit to the forefront and put the booze on the back burner. Port is a fortified wine with 19-21 percent alcohol.

Producers in Portugal recommend storing your port in the fridge first and bringing it out about 30 minutes before serving. A well made port stored in the fridge, should last you about 1-2 months. 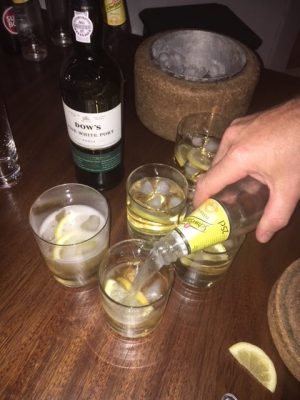 Call it the Douro’s Aperol Spritz or the Douro Spritz. Combine white port (dry or sweet) a few ice cubs, tonic, and top it off with a lemon, a little mint, and there you have it: Porto and tonic! Go in to any bar in Porto or the Douro (if you can find a bar there) and order one of these and you will live it up like the locals do.

It’s fun and refreshing. True believers think all well made port should be served straight up, but I will let you be the judge decide!

Port’s perfect partners are cheese and desserts. Some producers are getting creative and pairing port with main courses. 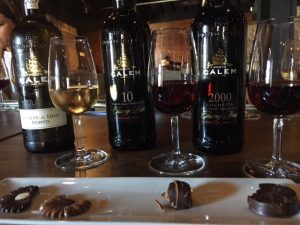 However, the bulk of the people I spoke with in Portugal thought port wine should stay where it belongs, at the beginning or end of a meal.

“Don’t force port into a moment that’s not its own.” Ana Margarida Morgado, Fladgate Partnership 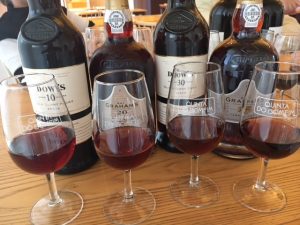 Ruby Port is fresh, youthful, and easy to drink. Made from wine produced from a blend of red grapes, fortified, and aged no more than three years and maintain their fruit aromas and bright colors.

A Tawny Port is a fortified wine that has been aged in wood and is lighter in color and body than Ruby Ports. They are aged in casks instead of bottles or large tanks. A Tawny port is a blend of several vintages with no age on the label. 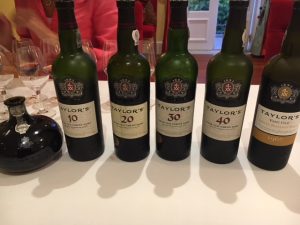 An Aged Tawny does have the age on the label and is marked as 10, 20, 30 or 40 years old. The front label must state the average age of the wine and indicate that it was aged in cask. The year of bottling must be stated on either the front or back label.

Late-bottled vintage LBV a late-bottled vintage port is a wine from a single year’s harvest from better vineyards, aged in cask for four to six years and, for the most part, ready to drink on release. LBV’s are not made every year. The label must indicate both the year of harvest and the year the wine was bottled. 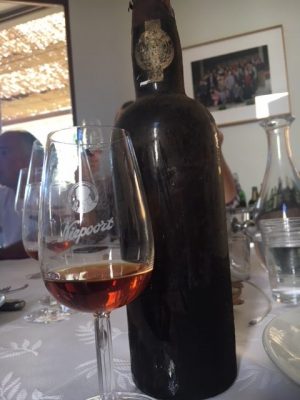 When you see Colheita (pronounced cole-YATE-ah) on the bottle it can be confusing. Believe me, I spent five days in the Douro until I finally figured it out. So, let us simplify shall we. The good folks at Calem tell us to consider Colheita as the witness of the year. It means harvest. There are two kinds of port houses English and Portuguese. The Portuguese use the term Colheita when they are referring to a single harvest vintage tawny port.

Fado is traditional Portuguese music. It’s a little sad or perhaps nostalgic or maybe even a little of both. The musicians dress in all black and sing about times gone by. It’s a throw back to when the fisherman used to go to sea and leave their families behind for months at a time.

The best way I can explain it that hits home for me is thinking about when my daughters were little babies. Looking back it wasn’t a sad time but it makes me sad to think about it. How time goes so fast, blink your eyes, and it’s gone. That to me is how I understand the “sadness” they spoke of when describing Fado music. A longing for the past. Calem does Fado and port pairings every night. Which is how Fado worked its way into this story. 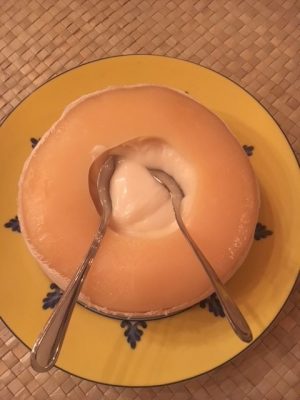 Three staples I didn’t see coming in Porto were these delightful additions to every meal. This  Portuguese cheese the locals called “Serra” (gets its name from the highest mountain in Portugal) was served at every meal. It’s a lovely soft cheese that paired perfectly with the 10 year old tawny ports.

Every Qunita (winery) produced its own olive oil. Of course we think of Italy when we think of Olive oil but Portuguese olive oil from the Douro was quite special. I loved it so much I even bought a bottle. And that like never happens. Another lovely treat were the roasted almonds that were served nightly with our aperitif. They went great with a Porto and Tonic.

My personal favorite pairing was the Viosinho dry white wine, paired with olive oil and perfectly roasted almonds, that melted in my mouth and left me longing for more. 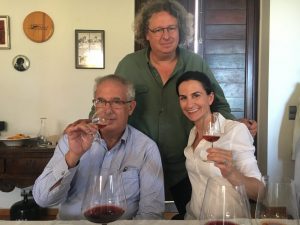 The highlight of the week had to have been when Dirk Niepoort decided to raid his cellar and break out some show stoppers. We happen to be there when Niepoort Vinhos was celebrating their last lunch of the 2017 harvest.

So, I’m not sure if they unearth these treasures every year or if was because I was traveling with French wine critic Michel Bettane. It doesn’t really matter, I was able to partake in the fruits of their labors and bare witness to magic in a bottle.

One of the highlights was opening an 1815 or (possibly 1863) Ferreira Garrafeira Port. To quote Michel “It’s a good life we live.”

This is the traditional process, still used to make wine at many wineries in Portugal. After the grapes are hand picked, sorted and destemmed they are placed in wide, thigh-deep granite treading tanks known as lagares, where the grapes are crushed by foot. Watch them in action in the VIDEO HERE! 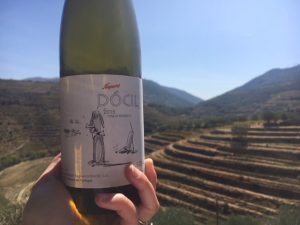 The two most common red wine grapes in Portugal are Touriga Francesa (or Touriga Franca) and Touriga Nacional.

The most common whites are Malvazia and Viosinho. I was very impressed by the still wines coming out of Portugal.

Every producer we visited served a still wine as well as a port wine. Keep your eyes open for still wines coming out of Portugal. I’m sure they will be the next hot wine picks from Somms across the country (if they aren’t already).

At the breathtakingly beautiful Yeatman Hotel  in the Vila Nova de Gaia, you will find all 82 rooms are named after a Portuguese winery. A fantastic Spa ( the best cure for jet lag is an hour long massage here. I learned first hand:)) The outdoor pool is shaped like a wine decanter. The hotel was so relaxing that I actually over slept and missed my alarm by two hours. I also missed what I hear is a fantastic breakfast. This is the first time I have over slept while traveling. A testimate to the comfy quarters, I imagine. Check out the view from the hotel in the VIDEO HERE!

Planing a visit to Portugal? 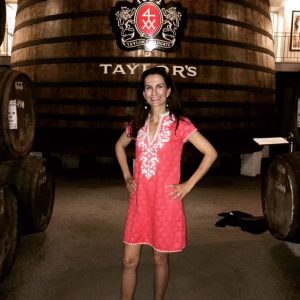 If you are planning a trip to Porto or the Douro Valley and are looking for tips on where to visit? Here’s where I went during my five day visit in September 2017. Thanks again to the The AEVP for inviting me on such an educational adventure.

Feel free to leave any questions or comments in the comment section below. Cheers!