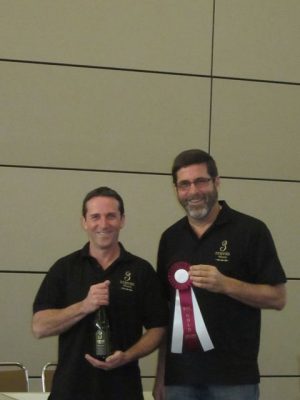 There were lots of smiles at the Robert Livermore Center on March 12, 2013, where the winners of the 4th annual TVC “Livermore Valley Uncorked” Wine Competition were announced and her are the 13 Livermore wines you must try! “Uncorked” is an annual wine competition strictly for wines from the Livermore Valley, and it’s run by the Tri Valley Conservancy, a group responsible for preserving the beautiful agricultural heritage of the Livermore Valley.  Their overarching goal is to prevent what happened to the Valley of the Hearts Delight – what Silicon Valley was called before it was siliconed: i.e., the wholesale paving over of agricultural land to build businesses and homes.

Some people at the ceremony smiled over and over, as they received multiple awards for their excellent wines. Those with grins from ear to ear included Art Jennet of Wente, who picked up three awards for Murrietta’s Well, one of Wente’s premium brands, and Chris Graves of Ruby Hill and Rubino, two flagship wineries in the Valley, who scored 4 awards, plus the overall Best in Show. Wow! Talk about a sweep. Fittingly, the Best in Show went to a Petite Sirah, arguably one of the Valley’s best performing reds in the warmer years.

Murrieta’s Well: 2010 The Spur, Livermore Valley (a blend of 48% Cab, 24% Petit Verdot, 23% Malbec and 5% Petite Sirah – arguably should have been in the Bordeaux Blend category and not this one) 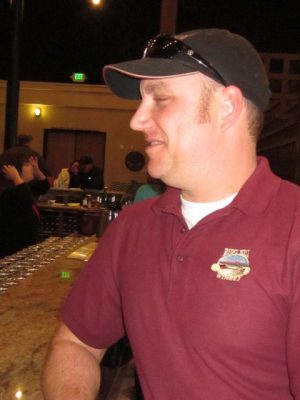 Big time winner, Chris Graves, was heartily congratulated by Livermore Mayor, John Marchand, who delighted in the opportunity to remind people of the everlasting claim this region has to vineyard fame. He noted that 110 years ago, there were 50 wineries in the region, with 5k acres of vines. That number fell to fewer than ten wineries and fewer than 500 planted acres by the 1970s. But now, we’re back up to approaching 50 wineries, with more wineries and vineyard acres coming online all the time. He concluded by remarking that Livermore is a city of contrasts and superlatives, saying, “Keep up the good work!”

Speaking of growth, this competition has itself grown greatly over the past four years, from a humble beginning of 50 entries from just 20 wineries, to 125 entries from 36 wineries this year.

And, as a judge in the competition for the past four years, I can tell you this 2013 competition was the hardest yet. The wines were a considerable notch up in quality over last year’s collection. A steady increase in overall quality is applaudably detectable, and there’s no doubt this region is benefiting greatly from better winemaking practices, as well as improvements in viticulture. And one would think a great deal of this is due to increased dialogue between winemakers and growers, making it possible to achieve better results across the board. 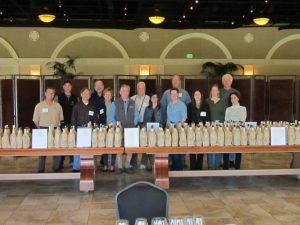 This year, the pleasant surprises were the lovely Chardonnays, with Darcie Kent’s clearly rising to the top: I knew it was hers immediately, as there is no denying the voluptuous delicacy of De Mayo fruit. This wine, thrilling with more acid than usual, thanks to the cantankerous growing season, is like drinking a peach straight off the tree.

So, too, the Sauvignon Blancs were delightful, with the 3 Steves 2012 rendition a sure fire winner, possessed of everything that makes this grape a delight when picked with the proper amount of acidity and pineapple punch. They did this one right: bravo for seizing the award for “Best of Show White” on their very first try! This is a winery to watch, without a doubt. 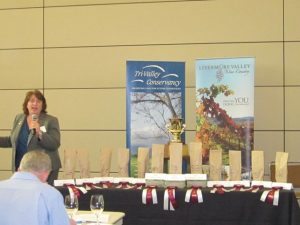 Deciding which Syrah’s and Petite Sirah’s to send up to the finals was tough. Without doubt, the Syrah’s were among the most even and solid of the bunch: there wasn’t a stinker in the pack. Rhonda showed Madden Ranch proud with her rockingly kick-butt rich rendition of this grape.

In the end it was tough to choose between the two Petites that made it to the final round: you could go with big and powerful, or you could put your money on elegance and finesse. There were also many solid Cabernets, which made the decision process extremely challenging, which is the best possible news. And the Other Bordeaux category was also a killer, but that Murietta’s Well Cabernet Franc, with its beautiful aromatics and charming blueberry, lavender and cocoa notes, was simply hard to resist. Kudos to Phil Wente for that one!

Hats off to TVC’s Executive Director, Laura Mercier, and her hard-working crew of mostly volunteers. They rocked, and the food was great, too. If you’ve ever tried to taste more than 20 or 30 wines in a day, you can appreciate how critical food is to keeping your palate — and your brain — engaged. As in any competition that is evolving in scope and format, this one will undergo more tweaks and improvements: just like the crafts of viticulture and winemaking here in truly one of the best wine regions of California, the Livermore Valley.

Congrats to all the winners! We, as consumers, are winners, too: we have all that great wine to enjoy!