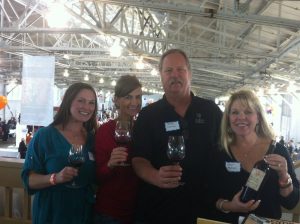 Heather McGrail jokes about the win:

The Cabernet Shootout is a wine competition created by Barbara Drady, who owns and runs Affairs of the Vine. She is a “wine evangelist” of sorts, and runs Wine Boot camps, Shootout’s for both Pinot Noir and Cabernet, wine challenge dinners, blending workshops, and also owns and operates her own winery, Sonoma Coast Vineyards. She is truly a woman who appears to do it all!

Her Shootout process for choosing winning wines is truly unique. Even though some wines clearly win, no one really comes out a loser. Each wine entered gets a score and notes from the judges in return. All wines are tasted blind without reference to producer, appellation or price. The top 64 wines are again re-tasted and narrowed down to the “best of the best.” These top wines then compete at the Cabernet Challenge where consumers pit their palates against the pros and select their favorites.

This year, the Cabernet Challenge partnered with the Bay Area Wine Society. President and founder, Tom Merle said his group is 1,300 members strong, with 200 active members. The event was held on January 21st at an urban winery called, The Winery on Treasure Island, previously used as a Naval airplane hangar. 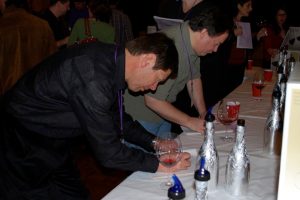 335 Cab lovers attended, where they were entertainment with a variety of Wine Oh friendly activities. At the beginning they could join two different panels upstairs, all on Cabernet, including tastings. Downstairs approximately 20 different wineries were pouring their winning Cabs. Amongst the wineries, gourmet food vendors, such as Trios Petits Cochons, a handmade pâté maker and Pollen Ranch Spices, a seasoning made from the pollen of dried flowers, were offering scrumptious samples. Consumers could also grab a bite to eat at the catered lunch table, then stroll over to the blind tasting where each person was given chips to “vote for as many as 5 wines or as few as one wine.” There were a total of 32 in all, broken in to two groups. The chips were gender specific so that all the votes would be tallied by gender.

And the Winners Are…

Female: The dense fruity nose opens to a silken palate showing blackberries, black cherry, dark caramel, and dark chocolate flavors. The palate is lovely with a smooth texture and show excellent oak integration. The components are fused beautifully. Male: Black plum, vanilla, dried herbs, cola, and a clean minerality define the nose. Nicely balanced on the palate with delicious red and black plum, cherry, black currant, and blackberry flavors that are well-integrated with the tannins. The long dark fruit finish is lace with earthiness. Nice length, structure, and acidity.

Female: Menthol, cigar box, and bright cherry on the nose introduces this wine. Complex layers of coffee, green olive, leather, dark chocolate, cherry, and blueberries are delivered throughout. Good masculine structure deftly sculpted. Great balance of acid, fruit, herbs, and fine tannin. “This is a novel worth reading.” Male: The enticing cherry, berry nose replicates on the palate with vibrancy. There is a brambly character here. The flavors of red and black currants and the minerally notes bespeak hillside or mountain fruit. Maintains the same level of intensity from the aromatic nose to the long finish. Elegant and very sophisticated. “Very much my style.” Age worthy too.


Female: Aromas of cherry, black cherry, and baking spice invite you to take a sip – but first – swirl and enjoy the aromas a bit longer. Bright, ripe, and delicious cherry and blueberry flavors. Lots to like here in terms of fruit. Simple finish lifted by the nice acidity.