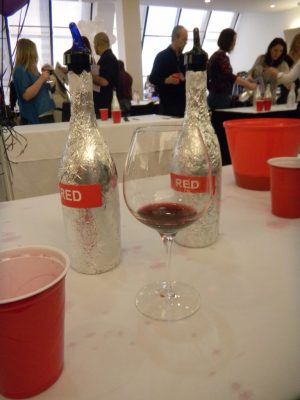 The 10th annual Pinot Noir Summit was another grand slam this year! Guests were not only treated to some of the best Pinot Noirs around, they also could participate in picking the best Pinot Noir of the night.  Many attended lively seminars, as well as sipping a little Blanc de Noir bubbly  at the Champagne and oyster reception.  The end of the night culminated with the festive Grand Awards tasting and ceremony. This year,  guests were truly in charge of their destiny at this summit and could enjoy and drink Pinot Noir as they pleased all day long.   Decorated with large festive balloon bouquets, guests were escorted into  the Hilton ballroom in San Francisco where they could brush elbows with local wine celebrities and watch judges being interviewed on camera, while testing out their judging skills. Rex Picket, Oscar winning writer of Sideways, former Good Morning America weather forecaster  Spencer Christian and The Bachelor, Ben Flajnik were all out participating in the event!

The Pinot Noir Summit is a wine competition created by Barbara Drady, who owns and runs Affairs of the Vine. She’s a self proclaimed “wine evangelist” and runs Wine Boot camps, Shootouts for both Pinot Noir and Cabernet Sauvingon, wine challenge dinners, blending workshops, and also owns and operates her own winery with her husband, Sonoma Coast Vineyards.

“It is the most fun you can have with your clothes on!” 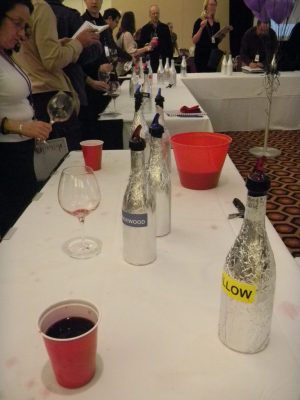 Guests who purchased all-day tickets were instructed to first head to the Pinot Noir Showdown where they were given a glass and, with no detail left out, told to season it (a French technique that involves pouring a neutral red wine into the glasses to be swirled around so that glasses can be rinsed of any off-smells from soap or odors).  Each guest was also given a purple or white booklet and led to the same color-coordinated door and tasting area.  Guests made their way around tables and tasted all the Pinot Noirs blind. The only known identifiers were the color that each wine was identified by. Once all the wines were tasted, wine tasters headed over to the voting table and were given chips to “vote for as many as five wines or as few as one wine.”  The chips were gender specific so that all the votes would be tallied by men vs women.

After the Shootout, wine lovers could pick a variety of Pinot Noir workshops to attend such as, “What make a Great Vintage”, “Exploring the Santa Lucia Highlands” and “Looking at Pinot Noir Sideways, A conversation with Rex Pickett.” 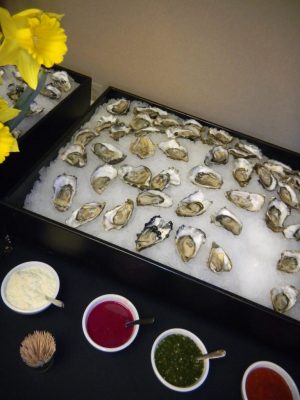 After the workshops, wine tasters headed upstairs to a room with a perfect view of Coit Tower and treated to fresh oysters on the half shell by the Drakes Bay Oyster Company with four unique dipping sauces. Later that night, the wine oh’s were ushered back into the transformed ballroom where several dozen wineries were ready to pour guests a taste of their wines, this time the wines were revealed and you could match up the color with the producer. Food vendors giving the wine lovers and foodies sample tastings, such as the crowd favorite Trios Petits Cochons, a handmade pâté company. A live Jazz band was playing in the corner creating a very festive event for all! Later that evening, anticipation was building and the men versus the women winners were finally announced!

For more information on the 10th Annual Pinot Noir Summit check out www.affairsofthevine.com.