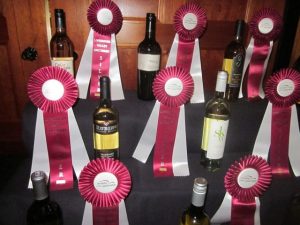 This year, 79 wines made it to the final tasting for the 7th annual Livermore Uncorked Wine Competition put on by the amazing team at Tri-Valley Conservancy, the agency charged with preserving undeveloped and cultivated land from unmitigated urbanization. Among the acreage under their stewardship are several thousand acres of vines.

This year’s big winner was the 2013 rendition of “The Whip,” a white blend of 28% Semillon, 24% Chardonnay, 14% Sauv Blanc, 11% Orange Muscat, 11% Vigonier, 11% Gewurrztraminer, 1% White Riesling made by Murietta’s Well. It took Best of White and Best of Show for the second year in a row. This well-made wine that caters to the palates of everyman/woman, went head-to-head with an equally fine example of one of Livermore’s heritage grapes, a 2010 Petite Sirah from Pat Paulsen Vineyards. It took Best Petite and Best Red of Show. In the Best Dessert category, Boa Ventura de Caires scored for their 2009 “DePorted.” 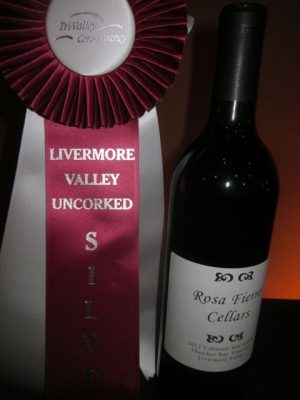 Familiar names like Wood Family, took Best of Chardonnay with the just bottled 2014 “Para Mas Amigas” that Rhonda wasn’t even planning to enter. 3 Steves once again scored a Best Sauvignon Blanc, this time for their just bottled 2014. Thomas Coyne took Best Merlot with their 2012, while Collin Cranor of Vasco Urbano won Best Red Blend for “The Sheriff,” a 2013 GSM.

Stony Ridge took Best Zinfandel for their 2012, while Chris Graves, former winemaker for Ruby Hill, scored an in absentia wine for the 2012 Reserve Collection Cabernet Sauvignon. Murietta’s Well scored Best Other Red with their 2012 “The Spur,” and took a Best of Cabernet Franc for their 2013 Los Tesoros. Dante Robere was a first time Best of Class winner for their 2012 Reserve Syrah 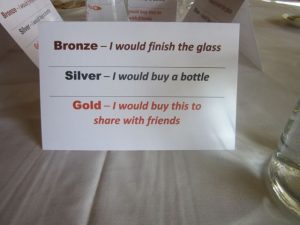 Congratulations to all the winners and to all who entered!

After all that hard work judging wines, what to do? Enjoy a fine meal, of course. This time, we went to Posada, a fairly new restaurant on the dining scene here that specializes in food as eclectic and delicious as many of the Livermore wines it carries by the glass. Owner Eduardo Posada, was one of the judges for the Uncorked competition, and after a hard day at work away from “the office,” came back to whip up an amazing appetizer of crab meat with goat cheese and avocado crema, which was nice with the 2013 Ruby Hill Trebbiano served by the glass. 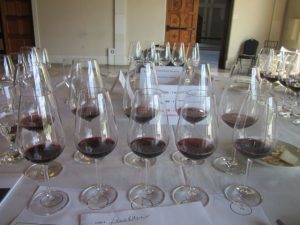 Once discovered, this slightly off the dining path in Livermore gem becomes an instant “go to” destination for anyone who eats here. Authentic southwest flavors are amped up with subtle Caribbean influences to create a broad-spectrum menu for the average palate and those a wee bit more adventurous. Mahi Mahi tacos with watermelon salad are delicious, the shrimp and corn cakes are a solid winner, the shrimp and grits are mighty tasty with just the right amount of heat, the BBQ duck with blue corn pancakes and red cabbage slaw are tangy and mouthwatering and the New Mexican style enchiladas topped with fried egg are an all around favorite.

Posada’s great local Livermore wine list makes this a fine dining destination, and they hold frequent wine dinners, with one coming up on April 21 and 28 with Rubino Winery. Steven Kent Winery plans to hold a dinner at Posada soon.

Speaking of Steven Kent, on the tasting menu for April you will find the 2013 Barbera, the last of this grape that will be bottled for the Collector’s Circle, as Steven Mirassou has decided to focus 100% on Bordeaux varieties. This leaves the delectable Home Ranch fruit for others to enjoy. It looks like the 3 Steves are stepping up to the plate to purchase it for 2015. Exciting! Meanwhile, you can enjoy this truly energetic, well-toned athlete of a wine with something heartily Italian like eggplant parmesan, spaghetti with meatballs or seafood pasta Fra Diavolo. With aromatics of white pepper, violets, cinnamon stick and red hots, the flavors are equally exotic, adding lavender, sage and chervil for a well-rounded experience. Highly recommended.

Also on the menu at Steven Kent Winery are both the 2012 and 2011 Cabernet Francs: the former scored Silver at the Uncorked Competition. While the 2012 is fruitier and more glitzy, the 2011 is showing the unmistakable integration and finesse not only of the vintage but of a year more in bottle. It does wonders. The 2012 offers oodles of raspberry, rose petals and sandalwood, along with vibrant flavors of currant and red chile jam.

In contrast, the 2011 is heavily seductive with its sage, rosemary, pinon and juniper notes, lifting throughout the palate with undertones of green capers, olive tapenade and roasted chile peppers. This wine would be ideal paired with bison burgers topped with grilled Anaheims and chipotle onion jam.

A shoutout to the newly released 2012 Steven Kent Winery Malbec, a thing of remarkable redheaded beauty. Everything about this lovely and lively wine screams RED! from its pretty nose of red plum, red currant and conifers, to its soaring flavors of cranberry, pomegranate and electric red currant jam. This is well worth seeking out. Buy some for your favorite redhead.