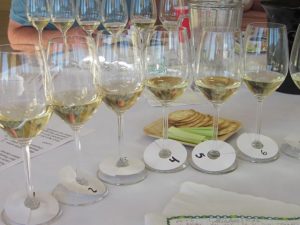 Going Green at the Mendocino Wine Competition: This is the only wine competition I’ve ever judged where we were “paid” in cheese. Not just any cheese, but amazing local sheep and goat cheeses produced by royal Farmstead cheese dairy in Boonville, owned and operated by Sarah Cahn Bennett, the daughter of Ted Bennett and Debra Cahn who own Navarro Vineyards. It’s a tightly woven community, and you can safely say it’s as vertically integrated a food chain as you’re ever going to find. If I had to make a choice between a bottle of Navarro wine and a tub of “Laychee” goat chevre, that would be almost as difficult a decision as choosing the Sweeps winners at the 35th Annual Mendocino Wine Competition, held at the glorious Sharffenberger estate winery. 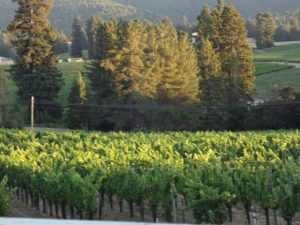 In an AVA that bills itself as The Greenest Wine Region, it’s a good thing that both of the Sweepstakes winners were officially “green,” even if the results were somewhat of a surprise. You’d expect a Sparkling or an Alsatian white to win the White Sweeps, which happened, but you wouldn’t necessarily expect to find a Zin on top of the heap of the Reds. But, every competition takes on its own life, and suddenly, judges who never vote for Zins find themselves joining forces with those who always vote for Zins to anoint a new Best Red. And that’s exactly what happened.

While the 2012 Navarro Gewurztraminer was far from a surprise, it was a breathtakingly brilliant execution of this spicy, aromatic varietal that practically screams gingersnaps, cinnamon and orange zest combined with a hint of jet fuel. The acidity was lovely, the aromatics blew your hair back and the flavors kept snapping your butt like a towel in the hands of a seasoned locker room attendant. At $15, if you don’t buy cases of this, you’re missing out on the GW sensation of the year.

Spritely, with an exceedingly pretty nose reminiscent of cinnamon rolls, the lively red-fruited 2011 Husch Zin crossed lots of borders with its juicy, lower alcohol, broad appeal. It had just enough pomegranate and raspberry fruit to make it Zin, but none of the annoying cloying ripeness that often drags Zin to the bottom of the scrapheap for those who don’t like to be hit by the jammy whammy. 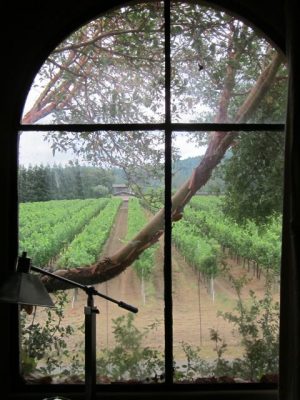 Why didn’t a Pinot win? You’d expect that from this region, with its middle name being land of Pinot-a-Plenty. But 2010 and 2011 were not particularly kind, and although the two Pinots that got sent to Sweeps, the 2010 Elke Donnelly Creek and the 2011 Zina Hyde Cunningham, both from Anderson Valley, were the best of the lot submitted, they still didn’t hold a candle to the other reds that graced our table in the final round.

Pleasant surprises were the utmost strength of the whites, including the blended white and the Alsatian flights that my panel, which included world-famous wine journalist and judge, Dan Berger, Dan Pearson from Santa Rosa’s Bottle Barn and winemaker Forrest Tancer of Iron Horse fame, were privileged to enjoy. We gave more gold medals for those two flights than any others, and deservedly so, as these wines proved their mettle, medal for medal.

Most of the Pinot Gris in the Alsatian flight exhibited a lovely white pepper and white peach combo that was really intriguing, creating great tension and counterplay, especially the gold medal winning 2012 Klindt Vineyards Estate Pinot Gris. The 2012 Navarro Muscat was made quite dry with all the apple and mandarin flavors typical of this variety. We thoroughly enjoyed the bright lime zest and air-dried linen of the double gold 2012 Handley Riesling we sent up to sweeps, as well as the racily outrageously acid-driven example that scored a double gold out of the chute, the 2012 Greenwood Ridge Estate Riesling. All of these wines are so soundly and beautifully made, you can’t go wrong. 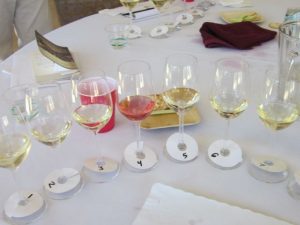 The White Sweeps was a monumental challenge: it was all good, and no, Martha Stewart was nowhere to be found. We had to choose from a beautiful Roederer Estate, Anderson Valley Brut Rosé, (3 votes), a fascinating white blend from Potter Valley, the 2012 Monte Volpe “Nube Bianco”, a 2011 Graziano Chenin Blanc, a fabulous 2012 Saint Gregory Pinot Noir rosé, a 2012 Navarro Estate Sauvignon Blanc, a 2012 Chardonnay from Husch, a 2010 Alder Springs Chardonnay, (4 votes), a marvelous 2012 Navarro Muscat, that feisty ready-to-party all night 2012 Navarro Gewurztraminer, Cuvée Traditional, (5 votes: White Sweeps winner), a 2012 Handley Cellars Riesling (one vote: mine) and a 2012 Navarro Late Harvest Riesling (one vote). 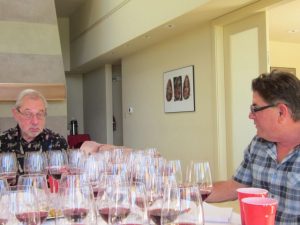 Yes, the old stalwarts – Handley, Husch and Navarro – are still setting the standards of measure by which we judge aromatic white wines, and we congratulate Navarro winemaker Jim Klein, Husch winemaker Brad Holstine, and Milla Handley of Handley Cellars.

And hats go off to Gregory Graziano, who made more of the sweepstakes whites and reds than anyone else. With labels like Monte Volpe, Enotria, Saint Gregory and Graziano, he’s the amazing winemaking engine that keeps on proving at every twist and turn, that Mendocino is much more capable of anything that anybody, including her biggest fans, can even imagine.

I think the biggest “green” component of this region is its yet unblossomed potential. I hope I live to see, and drink, the results!