Learn About Spanish Wine in Less than 9 Minutes 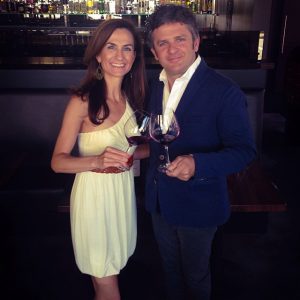 I recently went to 1760 to interview one of Spain’s most dynamic winemakers, Alvaro Palacios owner and winemaker of Palacios Remondo. The man partially responsible for revolutionizing the Spanish wine region and for making one of the finest wines made in Spain today, L’Ermita. Palacios energy and passion for what Spanish wines can be is infectious. Alvaro is committed to handcrafting wines that hold their own next to the best wines of Bordeaux and Burgundy. His family’s winemaking and grape growing history dates back three centuries, so you could say making great wine is in his blood. The Palacios family are fifth generation winemakers and grape growers and have grown grapes for 300 years in Alfaro, in Rioja Baja. In 1948, Alvaro’s father built a winery, called Palacios Remondo which Alvaro runs today since his father passed away in 2000.

When you watch this video and get to know Alvaro like I did, you will see Alvaro is more than a winemaker: he’s a sibling (one of 9 children), a husband, a father, a son, a gardener, a matador, and a man of great honor. Alvaro is pursuing his passion and honoring his father at the same time. Elevating a Spanish wine region that was once abandoned and now is blooming. Watch the wine video and discover why Alvaro thinks in Spain’s Rioja Baja, Granacha is golden and Tempranillo needs to be tempered.

My objective in life: to look for vineyards in places with monastic origins and old vines. One or more vineyards with something special which can be transformed into a wine with a powerful identity and deep mysteries and charm, even magical. To sum up, the category of a great cru. Although we almost ruined that ancestral heritage in Spain, we still have the ingredients of a unique significance. We must leave the intensive and modern viticulture, nonetheless reasonable, to tasty and arid soils, under a sun which provides the grape with the energy necessary to make a good average wine. But in order to elaborate great wines, we must reconstruct the vineyard by means of traditional and old parameters. The same parameters which explain why, from more than three or four decades, Spain has achieved a passionate interest for its wines. – Alvaro Palacios

The Palacios Remondo winery’s history stretches back five generations when the D.O.C. Rioja was first gaining notoriety as one of the premier winemaking regions of the world. José Palacios Remondo, father of renowned winemaker Alvaro Palacios, reestablished the estate in 1945. Alvaro Palacios, born at his family’s winery in Alfaro, became one of Spain’s winemaking pioneers, with great successes in Priorat and Bierzo. In 2000, upon his father’s death, Alvaro assumed responsibility for Palacios Remondo, and committed to taking the estate’s quality to new heights. Under his inspired leadership, Palacios Remondo is now a rising star of the D.O.C. Rioja . Committed to organic agriculture and preserving the blends native to Rioja Baja, Alvaro produces four superb wines at his Rioja estate that are each grown in stony, sedimentary soils resembling that of Chateauneuf du Pape. La Vendimia, meaning “The Harvest” in Spanish, is a bright vino joven made from equal parts of Tempranillo and Garnacha. La Montesa, a true crianza and the winery’s flagship wine, hails from a single vineyard located at the base of the Yerga Mountains, at 1,800 feet – one of the highest points in Rioja. Propiedad is Alvaro’s answer to a modern-style reserva. Made from high-elevation Garnacha, it is made in extremely limited quantities. And Placet, the only white wine that Alvaro produces, is a stunning example of 100% Viura fermented and aged in oak tanks.

Special thank you to 1760 for allowing Wine Oh TV to shoot at their San Francisco restaurant.