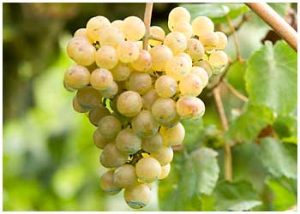 In honor of Wine Wednesday I picked up a bargain bin bottle of wine at Cost Plus. I grabbed a 2008 Burgans Albarino Rias Baixas marked down from $11.97 to $7.88 I walked away with a steal and a Wednesday worthy wine. According to the label the wine gets its name from the Burgans hills, the heart of the Salnes Valley in N.W. of Spain.

Albariño is by far the the most popular grape variety in Rías Baixas and makes up 90% of all plantings. It is also one of the few Spanish white grape varieties produced as a varietal wine on its own and designated on labels.

It’s a small, green, thick-skinned variety, the grape is a low yielding variety and expensive to cultivate. It’s kind of like a mix of several other grapes. A dash of Riesling for its minerality and bracing acidity; a pinch of Viognier, because of its fleshiness and peach/apricot character and a hit of Pinot Gris for its floral bouquet. Albariño is a refreshing wine that pairs well with seafood or in my case pita chips.

The best part of Albariño is that it has become a very popular wine in the United States and can easily be found at all fine wine shops within the range of $10 to $20 or in my case $7.88 at the bargain bin at Cost Plus!