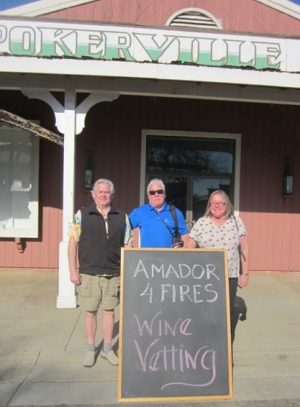 There’s a whole new way to experience the many blessings of Amador Wine Country. Brought to you by Brian Miller and Deirdre Mueller, the folks who created the fabulous Barbera Festival (coming up June 13, 2015), Amador Four Fires debuts the first Saturday of May at the Amador Fairgrounds in Plymouth.

Featuring food and wines from the four unique categories of wines that flourish in the region, namely Iberian, Italian, Southern France/Rhone and Heritage American, over 50 wineries and the area’s top restaurants will be cooking up some tasty treats. In addition to open flame prepared foods, attendees will enjoy local olive oils, handcrafted candies, honeys, cheeses, cider and craft beer. 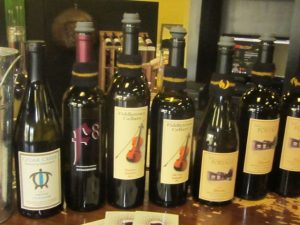 In the Iberian category, you’ll find varieties like Albarino, Tempranillo, Verdelho and the traditional Spanish port varieties, while Aglianico, Barbera, Dolcetto, Pinot Grigio, Moscato, Nebbiolo, Primitivo and Sangiovese comprise the bulk of the Italian selections. The most expansive category in the region is the Rhones, where Grenache Blanc, Roussanne, Marsanne, Viognier, Carignane, Counoise, Grenache, Mourvedre, Syrah and Petit Sirah shake their excellent booty. The Heritage American category features what many consider to be the region’s — and California’s — indelible signature grape, Zinfandel. With so many older vineyards featuring head-trained Zin, this is truly a Zinners paradise. 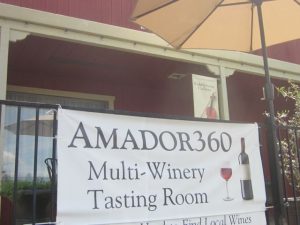 I recently had the great pleasure to participate in the pre-event vetting of 165 wines that were submitted for judging in advance of the May festivities. Brian Miller of Amador 360 formulated the experiment, which consisted of asking participating wineries to submit their best wines, across the four categories/zones, to be part of a blind judging process. Each winery was asked to choose the zones they wanted to pour in at the May 2 event, and was limited to four wines per category/zone for the judging. 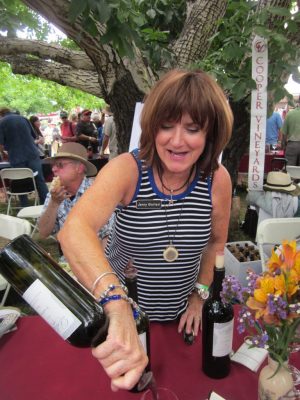 Over a two-day period, 165 wines were tasted by 27 judges from all over the state, including winemakers, wine writers, sommeliers and wine buyers. There were two judging sessions, with two sets of wines each, consisting of approximately 41 wines in each flight. There were three panels of 7 judges and one of 6, which pencils out to over 1,100 individual assessments.

Each flight included whites, reds and desserts, and the judges were asked to evaluate a particular flight, with the option to explore wines from the other flight as well.

The scoring methodology was simple: each judge rated a wine 0 for neutral, + for an exceptionally noteworthy example, or – for a wine that was flawed or did not posses sufficient varietal character. Most wines, of course, scored 0, meaning they were decent, had no flaws, and would generally pass muster at another competition where they would most likely be awarded a Bronze, perhaps even a low Silver. 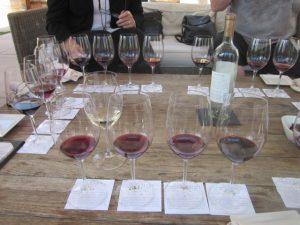 Miller says this particular process of wine assessment turned out to be very interesting and useful, while different in many ways from the traditional award-by-consensus system common at wine competitions, where judges actively confer amongst each other to arrive at a single score or medal for each wine.

He provided the following analysis of the scoring process, saying, “I forced the results to range between 0 and 100, representing a percentage of a perfect score which would be one where every judge on the panel gave a positive assessment for a wine. A score of 50 is completely neutral. Even with the expected large number of neutral assessments —I expected 75% or so for the flight from an individual judge — the results were wide ranging.” 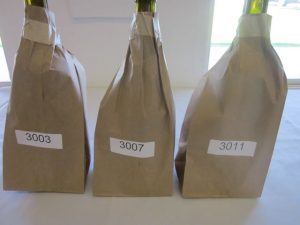 He considered that the top scoring wines of each panel, the equivalent of a “Gold,” would garner a 71-79% score and above, depending on the generosity of the panel. About 18% of the wines fell into this category, just about what you’d expect in a typical wine competition. Observes Miller, “This is a difficult challenge for a wine, going against 7 very experienced palates. So, like a difficult wine exam like the CSW, 70 percent is passing and deserving of respect.”

Although no wine received a perfect score, 6 wines came very close: each was just shy of perfect, with all but one judge voting positive and the dissenter voting neutral, which would be equivalent to a Double Gold. Likewise, no wine received an all-negative assessment. All in all, this bodes well for overall wine quality.

Miller provided the following distribution of scores among the 165 submitted wines:

Each judge was made privy only to the identities of the wines to which he or she gave a positive rating, and the scores will be kept confidential. Interestingly enough, Miller shared that the top six wines were: Barbera, Carignan, Moscato, Sangiovese,

Verdelho and Zinfandel. This means that each of the four zones/categories were nicely represented. Fascinating, eh?

Both from this tasting and frequent excursions to the region, I have to say without doubt that the Barberas here are getting better by the season, the Tempranillos are showing promise and the Petite Sirahs are proudly blueberry with amazing texture.

The Zinfandels are for the most part becoming more elegant, although that is due in no small part to the hand of the vintage, especially 2011, which spanked back the jammy fruit across the board. Yes, there are still winemakers who exaggerate the properties of Zin until they might as well be Petite Sirah, to which I say, what is the point?? I’m loving the Primitivos across the board, and wishing the Syrahs were a bit more even.

In short, there are plenty of great wines to light your fire here in Amador.

A totally unique way to experience the four “wine zones” of Amador, the food should be amazing, with lamb dishes, paella, Sana Maria style grilled tri tip, chicken and pork, along with cowboy campfire peach cobbler.

Come discover new favorites or reinforce your ardor for old loves. For more information on the Amador Four Fires event at the Amador Fairgrounds in Plymouth on Saturday, May 2, visit amadorfourfires.com

Tickets can be purchased here:

And don’t forget to make dinner reservations at Taste, the best restaurant east of San Francisco and west of Sacramento, owned by power couple Tracey and Mark Berkener whose food will be featured at Four Fires. It’s conveniently located in downtown Plymouth and worth every mile of the drive to the area. A few lodging options exist in Plymouth itself, and nearby Drytown, Amador City and Sutter Creek make good alternatives.