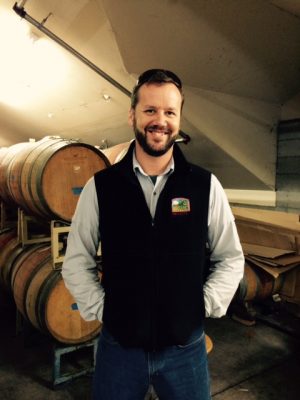 Livermore wineries welcomed an enthusiastic crowd for barrel-tasting this past weekend. The scenery was spectacular, the hills as green as they will ever get and the vines are beginning to bud. Spring!

Winemaker Aaron Luna at Fenestra was proudly sharing his 2014 Estate Grenache, Mourvedre and Syrah, each to be bottled separately in 100+ case lots. Although the Grenache was absolutely beguiling and oh so friendly, the Mourvedre stole my heart with its spicy red streak of strawberry and raspberry that nicely complemented its intrinsic animalistic ferality. The Syrah was the lumberjack of the batch, with bacon, molasses and a big wollop of white pepper. All three will also be combined in another truly splendid “Infrared” bottling, which typically is Grenache dominant. 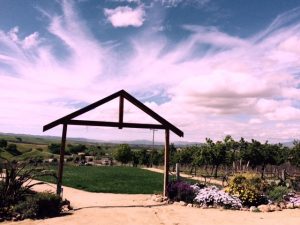 At the 3 Steves, a huge crowd gathered outside to enjoy the views, the wines and the incredible display of artwork by the energetic and talented nature artist, Jude Bischoff. Inside, an equally large crowd packed both the tasting room and the newly furnished barrel room, which has been turned into the de facto Posada dining room, while the popular restaurant, featuring excellent New Mexican cuisine, undergoes expansion on Murietta Ave. KTVU Channel 2 weatherman, Steve Paulsen, showed up on Saturday afternoon, officially bringing the “Steve count” to Four.

At Charles R at the end of Greenville, a friendly and homey spot in the shade of the old oaks, wine lovers were relaxing to the music, sipping barrel samples of Petite Sirah, grooving on Touriga from the Ramon Rios vineyard, and attempting to make a dent in the humongous sandwiches from “The Grilled Cheez Guy.”

In addition to the Petite Sirah barrel samples, we also tasted the outstanding 2010 Cabernet Sauvignon from Casa de Vinas, the legendary Livermore vineyard farmed by Julio Covarrubias. Owner/proprietor Dick Bartlett remarked how fortunate the entire Valley is to have both Julio and Collin Cranor (Nottingham Cellars) collaborating to continually raise the bar on fruit quality. “I’m not a farmer,” said Dick. “I’m glad they are so committed and serious about what they’re doing. Collin is amazing: such energy and vision, and he’s lucky to have his Dad behind him all the way to make it happen. It makes a difference for everybody.”

We then tasted the 2008 Cabernet Sauvignon from Bodegas Aguirre Vineyard, the last vintage Dick and Bonnie’s late son, Randy, made. Said Dick,

“Man, this wine took forever to come around! But it’s just starting to show up and it’s really incredible now.”

That signature herbaceousness and arresting jolt of juniper that instantly hits you in the nose announces a wine that is nowhere near the middle of its marathon lifespan. Despite its high alcohol (15.2%), it has enormous acid and inky depth, like a very deep well with profound secrets yet to share. 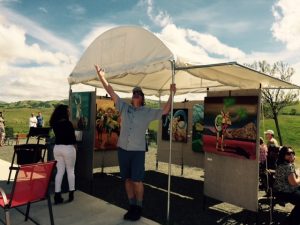 Chris Sorensen of Caddis, his wife Courtney and their baby boy were grooving to the music of Michael Beck while guests sampled the massive 2014 Thatcher Bay Caddis Cabernet out of barrel. You can clearly see the signature of greatness in this wine, whose older brother, the 2013 just captured Best of Class at the 2016 SF Chronicle Competition. The 2013 Caddis Estate Merlot was most impressive, statuesque and packed with lush dark cherry, chocolate and a decidedly Peets-like finish of coffee.

At the Reserve Room at The Steven Kent Winery, Cindy, Pam, Mike and winemaker, Craig Plouff, were pouring a just-released 2014 “Merrillie” Chardonnay ($34), the first one under this name to come from the historic Mission Ranch in Arroyo Seco. No more Livermore Chard for SKW.

You’ll fall for the label of the “Let It Pour” Sangiovese ($36), a non-vintage affair that depicts a couple getting cozy under an umbrella. Let it rain, indeed, as it won’t affect the parade of sunny, fresh flavors that pour onto your palate from this bright and spicy wine from the 2012 and 2013 vintages off the Home Ranch. It’s easy to “Let it Pour, “because this is a screwtop: yay!

Then it was onto the cavalcade of Cabs, beginning with the just-released 2013 Ghielmetti Cabernet, 100% Cabernet Sauvignon, done in 90% new French oak. MamaMia! A gorgeous nose of blackberries, potpourri, cigar box and pine boughs sets the stage for a flood of delightful blackberry jam, coffee and chocolate truffles filled with dark cherry liqueur. This is “user-friendly” Cab, with a high degree of deliciousness.

The 2013 SKW Home Ranch Cab followed: it had just been bottled with a release of September 2016 planned. This has more herbaceousness and juniper notes than the Ghielmetti, with a big mouthfeel and lots of chocolate. Muscular and definitely worth waiting for, like Denzel Washington.

SKW Winemaker Craig was pouring the barrel sample of 2013 Smith Ranch Cabernet which will be released in November. Always a stunner, the Clone 8 from Smith Ranch oozes cassis, chocolate and assertive tannins. Lean, yet stalwart, this is wine is a lot like Sam Elliot: lanky and laconic with a wicked twinkle that belies his underlying strength of character.

Speaking of lean and lanky, a visit to Retzlaff held a double bonus: not only were these the most exciting barrel samples I tasted all day (too bad they’re completely sold out of futures), but they were poured by Aaron Taylor, who was joined briefly by brother Noah. Their Mom, the late Gloria Retzlaff Taylor, would surely be proud of them and their families and how they’ve stepped up to keep the beautiful property a showcase of Livermore Wine Country hospitality.

The 2015 Retzlaff Estate Chardonnay out of barrel was just luscious with pear, melon and ripe peach, but was a bit overwhelmed by the uncontainably spirited Sauv Blanc that was poured ahead of it.

Said 2015 SB comes on like a truckload of grapefruit stacked upon a barge of pineapple: an entirely too flavorful wine to drink with anything but another sip of itself. It’s like Bette Middler on stage – no room for anyone else.

We persevered onward to the 2015 Merlot (peppery, pepperminty, red plum and cherry peppers) and the 2015 Cab (black cherry, tobacco leaf), both exhibiting that typical Retzlaff purity of soul that produces classic cellar candidates.

As the afternoon shadows deepened, Aaron took us on a quick tour to admire the enormous Grey Riesling vine on the side of the barn: he remembers when his parents, Bob and Gloria, grew acres of it on contract (mainly for Wente), until the wine cooler craze and the advent of sweet white Zinfandel crucified the fruit-driven whites of the era. He explained the 12 ft spacing of the Retzlaff vineyard stems from when Grey Riesling, a big cropper, ruled the day.

Walking around the farmhouse where he grew up and father Bob still lives, Aaron introduced us to the newest members of the vineyard: brand new Sauv Blanc vines just planted in place of some under performing old Cab. I’ll miss seeing that gnarly treelike Cab, but can’t wait to taste the summer vacation splendidness that will spring forth from the new planting of Sauvignon Blanc. Too bad we’ll have to wait another four years!