Barrels, Bottles and Brews in Livermore 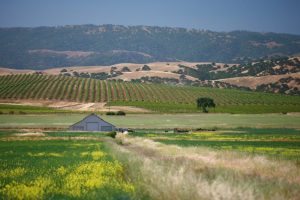 What’s better than wine tasting in Livermore on a beautiful day in one of the most scenic local wine country destinations? Add barrels, spirits and a few brews, along with some great jewelry, live music and food trucks, and you have the makings of an outstanding outing.

The inaugural “Barrels, Bottles & Brews” event in Livermore, held this past weekend, March 25 & 26, gave a wide audience of tasters a whole new reason to love Livermore wine country. We gave it a whirl. 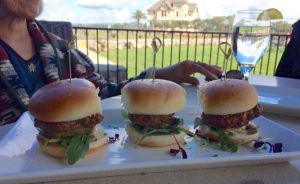 First stop was lunch at Concannon’s Underdog Wine Bar, where the views are as magnificent as the beautifully landscaped grounds. Eat outside no matter the weather, as they have great heaters and blankets.

Everywhere you turn, there’s a cleverly pruned bush or hedge that’s been turned into a work of leafy art by longtime groundskeeper, Ernesto Hernandez. You could say he’s got shear magic.

We smiled as we spied a peacock, dinosaur, chickens, dancing girls, bottles, teacups, bowls, and hedge people, all fashioned from foliage. And then, there’s the brick wall of the original winery building, blanketed with wisteria: fabulous! 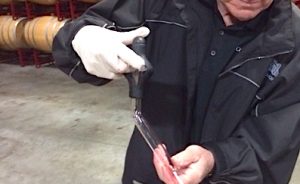 Concannon did it right by holding their barrel tasting in the magnificent barrel room, flanked by those 16 incredibly monstrous French oak uprights, imported decades ago. We sampled a lovely 2014 Grenache side-by-side a barrel sample of the 2015, both as red fruit-driven as a summer day.

Next was the explosive, powerful, deeply purple magnificence of the 2015 Petite Sirah barrel sample, with unforgettably plush tannins. The 2014 Captain Joe’s Petite Sirah was served alongside, showing the maturity of another year. It is an eminently enjoyable mouthful of Concannon’s signature grape.

On to Mike and Vickie Eckert’s Artisan Spirits and Eckert Estate wines, where we sampled Mike’s delectable orange spice brandy (everybody in my group surrendered and bought some) and his absinthe vert, a pure licorice lovers dream. So much more refined than Ouzo, this stuff whisked me right back to Paris, where I first tasted it 40 years ago. Mike’s gins are also smooth as silk, all made from grapes, so entirely gluten free. 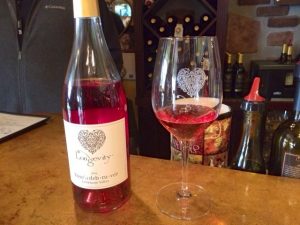 I had planned to include a brewery visit next, but my posse opted for more wine, so we dropped into Longevity for a sip of the Zinfandel and Cab Franc barrel samples. Everyone came away dutifully impressed with the lovely Debruvee rose, named for the equally lovely proprietess, Debra Long. Her husband and winemaker, Phil Long, also crafted a really charming 2015 Viognier, filled with pears and peaches. 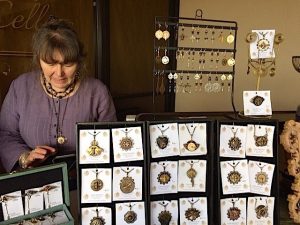 At Occasio, named for the Roman goddess of opportunity, we were reminded that there’s no time like the present to buy presents for yourself, and artist Aryanne Elfenbein of Ancient Charms, impressed with her artful jewelry, much of it fashioned from what looks like old time pieces. She’s especially fond of bumblebees and honeybees, and they are lovingly incorporated into pins, pendants and earrings so you can show your support for these critical pollinators.

Inside, we were treated to a crisp and refreshing 2016 Sauvignon Blanc: mouthwatering! Young winemaking talent, Dave Hendrickson, was carefully thiefing samples of 2015 Malbec from barrel, so as to not lose a single drop. We joked that his skill proved him to be “the dripless wonder.” So exceptional was this Malbec, from Ghielmetti Vineyard, it had to be the best wine of the day for me. The newly released 2016 Grenache rose was also a bit hit: perhaps the best ever produced under the Occasio label. 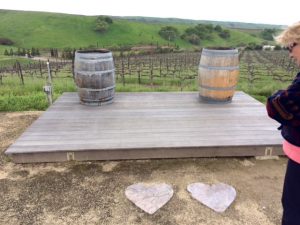 When the sky is filled with glorious clouds, nothing beats the view as you drive out Tesla towards Greenville Road. At its apex, a breathtaking panorama awaits you at 3 Steves Winery, where three guys named Steve have a winery, a Cabernet vineyard and a sweet wedding hill.

Two stone hearts mark the standing places of the nuptial couple. Here, we drank in Livermore’s most alluring libation: its matchless spring green scenery. Everywhere the eye dwells reveals a new shade of emerald. It’s no wonder that Irishman James Concannon fell in love with this place so long ago.

From Livermore’s most dramatic views, we descended to some of the most charming in the countryside. Charles R is set by a stream, amidst a bower of ancient oaks, dappled by sunlight, ruffled by the breezes but untouched by anything resembling civilization. Dogs seem to love it as much as humans!

It’s a cozy spot to spend an afternoon listening to music. We were treated to an outstanding concert by Greg Lamboy, a versatile solo guitarist who belted out covers of beloved artists like Levon Helm, Paul McCartney and Peter Gabriel with an emotional timbre tuned to each selection in his repertoire. 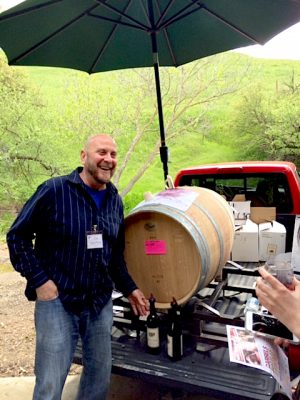 Here, we were sipped another outstanding example of 2015 Livermore Petite Sirah from barrel. So spicy, saucy and savory was this stellar wine that my friend Pat thought it was sexy enough to wear as perfume. Charles R also has a sensationally sassy and svelte 2012 Zinfandel and a smooth operator 2012 Cabernet Sauvignon.

Our last stop was Rodrigue Molyneaux, another quaint winery gem that welcomes you with horses whinnying and countryside charm. Proprietor Nancy Molyneaux is an expert in sustainable gardening, and the grounds are covered with drought tolerant plants, carefully marked with painted stones.

Ample seating beneath bowers of shade trees and bucolic vistas make this an ideal picnic destination. Assistant winemaker, Jeff Finch Jr., was pulling 2016 Estate Cabernet from a hybrid barrel made of American and French oak, alongside a neutral one to show which flavors were coming from the fruit and which emanated from the oak. It was an instructive lesson, highlighted by Nancy’s poster depicting typical oak flavors, like dill, vanilla, clove and butterscotch.

Fortunately, you don’t have to wait for a special event to visit the dozens of wineries, handful of breweries (Eight Bridges, Shadow Puppet and Working Man) and distilleries (Artisan Spirits and Sutherland) in the Livermore Valley. Most are open every weekend. Come, explore the beauty of Livermore, where there’s always more to learn and love.