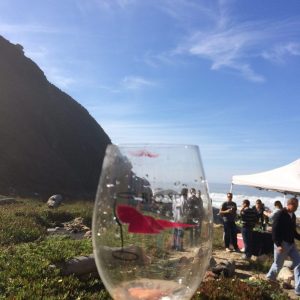 This year, the fact that the Big Sur Food & Wine Festival happened at all, in the wake of the devastating Soberanes fire, is certainly a miracle. More than that, it is a testament to the strong spirit and never-ending optimism of the organizers, Aengus Wagner and Elsa Rivera, and their priceless team of volunteers who make up the Big Sur Food & Wine Foundation, Inc., a formal 501(c)(3) nonprofit charitable organization.

According to Wagner and Rivera, the group was created to be a vehicle of support to other local organizations while engaging in unique educational and entertainment activities that blend fine food and wine with Big Sur character. Its intention is to stimulate the local economy and donate a large portion of event proceeds to support local nonprofits that benefit Health, Safety, Education and Arts.

Both Wagner, whose title is Chief Ambassador of Instigation and Rivera, the CFO and Events Manager, intended for the 2016 Big Sur Food & Wine event to fund relief efforts for those affected by the highly destructive Soberanes fire. 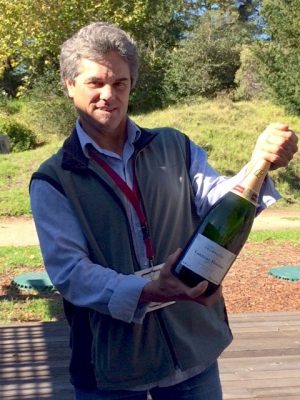 With less than two months of organization, the team, which includes Board Members Matt Peterson (Wine Director), Frank Pinney, Diana Ballantyne and Britt Govea, aided by Working Committee members Matt Glazer, Peggy Giles, Weston Call, Lisa Haas, Jennifer Haydu and Laurie Smith, pulled off a winning event that provided an enormous shot in the arm for all the local businesses, many of whom suffered mightily from the impact of the devastating and drawn out siege.

While the event in its totality has always been a cornucopia of culinary and winemaking talent, plated on the most magnificent scenery of all, the Magical Mystery Tours have grown legs of their own. And what legs they are, marching gallantly and gleefully into new and undiscoverable places – undiscoverable unless you are with the folks who have that most magical of all keys: personal access to priceless treasures. We began by boarding a bus in Carmel, which took us to Palo Colorado Canyon Road: this road climbs to Garrapatos Ridge, which looks down on the park now infamous for being ground zero of the Soberanes fire. Before containment, it managed to torch well over 100k acres. 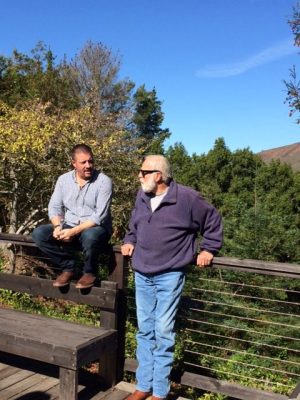 Navigating through a forest of aromatic eucalyptus, mossy streamside rocks and lush ferns, we arrived at the Glen Deven Ranch, former home of Harvey and Alice Mudd, which they thankfully sold the place to the Big Sur Land Trust.

Todd Farrington, Community Engagement Manager for the Trust, explained that the ranch hosts youth groups, introducing them to the natural wonders of this immense property, that caretaker, Jim Cox, has managed for years. Cox shared that he got the job as caretaker back in the 70s because he loved horses and could fix things. He’s been here ever since. The Mudd’s appreciated his service so much, they granted him the right to reside at the property for as long as he wishes. He so loves the place, it’s hard to imagine him doing otherwise. (Todd left; Jim right)

Cox pointed out how close the Soberanes fire had come: we could see the scarred landscape to the north and east of us as we climbed to the crest of the ranch, passing a pair of old donkeys on our way to a glorious vista of the Pacific before us. 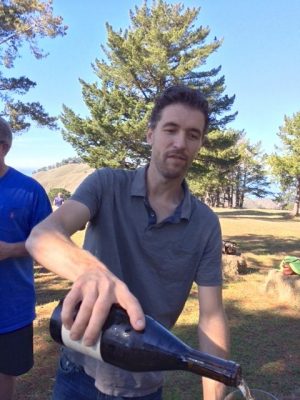 Its strategic location and size enabled Glen Deven to serve as a Cal Fire staging area during the recent fire. We were grateful to the efforts of all who fought the fire as we enjoyed a lovely glass of Damien Georis’ Madeleine L’Arsouille 2015 Chenin Blanc from Monterey county, redolent of white peaches and nectarines. It proved a worthy companion to the fresh seafood bites by Michelle Estigoy of Cultura Comida y Bebida in Carmel. Michelle was a sous chef under Chef John Cox during his time at Post Ranch’s Sierra Mar. 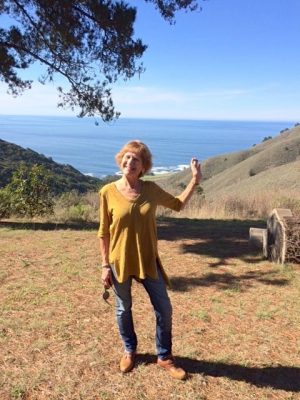 Many photos were taken against the stunning backdrop and new friends made, as the group shared their stories about what brought them to Big Sur initially, and in particular, how they ended up at the festival. Lots of marriage proposals, weddings and anniversary celebrations happen here: no wonder. Being on the knife-edge of beauty and peril causes the mind to view things in a more expansive manner. The next part of our mystery tour took us on a stimulating hike through the Smith Ranch property, along a rushing thicket-entangled stream, eager to meet its ocean destiny. After crossing the stream twice, we emerged from the damp shade of the vine-covered trees to brilliant sunshine: it felt like arriving in the Land of Oz.

Suddenly, we were at Rocky Creek beach, surrounded by lush fields of Cala lilies and fragrant mint, beneath the impossibly high Bixby Bridge, tacked precariously to the firmament above our heads. We stood in wonder as the scene unfolded, the smell of the ocean drawing us closer.

Of all the times I’ve crossed that bridge, I’d never imagined being underneath it, drinking some fine white Burgundies, Chablis and champagne, provided by Todd Mathis of DNS Imports.

Todd explained that “DNS” stands for “Do Not Spit,” and you really didn’t want to spit any of this liquid nirvana, especially when paired with the sweet Hamachi and sea urchin crudo drizzled with a lovely pesto prepared by Michelin Star Chef Justin Cogley and his smiling, gracious team from Aubergine. Divine doesn’t begin to describe it. Swathed in mist, the surf crashed as the tide came in, and the group lazed around the sandblasted rocks, feasting like sea otters on the ocean’s bounty. 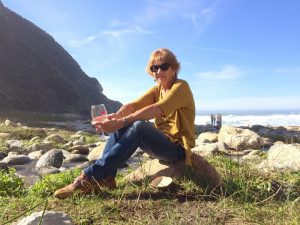 I sat by the stream, drenched in sunshine and spray, picking spicy fresh watercress as the waves crashed in the distance, making music as ethereal as the texture of the fine Pierre Paillard Brut Grand Cru in my glass. Ah, bliss. It is a place of refuge inside my head, where I find myself going a lot lately, when the squeaking din of reality proves too jarring to take.

Lingering in this sacred-feeling spot forever seemed the right thing to do, but we had one more stop on our Mystery Tour. Little did we know that we were about to step deep into photographic history. As we departed the bus (is there a word for getting off a bus that sounds as good as “deplaned”?), history literally came alive as the fourth generation of the famed Weston family, Zach, greeted us at the stairs to the famous Bodie House on Wildcat Hill. 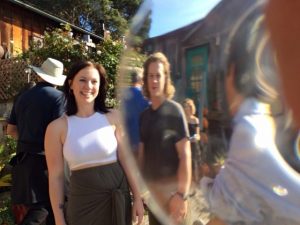 Here, his great grandfather Edward lived off and on from 1938 until his death in 1958, immortalizing the stark, spiritually inspiring scenery of the Big Sur coast with his eye for intimacy that captured a shell or a cypress tree with the same sensuality as his artistic nudes.

Effervescent Garrett Bowlus and his Mom, Leslie, poured Albatross Ridge wines as we took in every beautiful detail of this old uninsulated pine cabin, much the same as it was when built by Edward’s third son, Neil. The fireplace was glowing red with pensive embers, as it does most every day, beating back the Pacific’s inevitable chill. 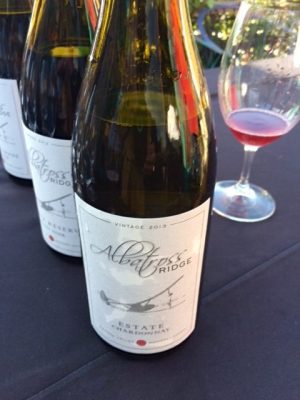 Everything about this place is gleamingly alive, warm with the passion of lives well lived, and well-preserved. Kim Weston, son of Cole Weston, Edward’s youngest child, lives here with his wife, Gina, and practices the art that runs so fluidly in this photogenically blessed family. An adjacent studio displays and sells works from several family members.

While Zach and his girlfriend Annabelle Scott (a Weston Scholarship award recipient), overviewed Edward’s evolution, evident in the many photos on walls and shelves, I admired the original equipment in the still functional, but unimaginably tiny darkroom, complete with notes on developing.

Edward’s desk, used today by grandson Kim, is cram-filled with his old books, his whiskey flask and several handwritten notes, including my favorite, “I do not lend books to friends. I do not wish to lose my books, or my friends.” Next to it sits his 4×5 camera on a tripod. 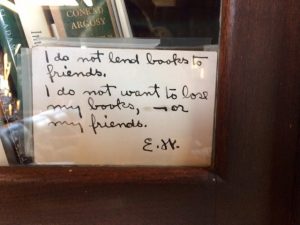 Prints adorn the wells, telling the story of many friendships, including an enduring one with Ansel Adams, who so enjoyed hanging out with likeminded souls on this last piece of earth until Japan that he built himself a home high in the Carmel Highlands.

During WWII, Eward Weston used the vista from Wildcat Ridge to keep an eye out for potential Japanese invaders. Today, the Weston’s keep vigilant for unannounced visitors: Bodie House is a mecca for photographers worldwide who yearn to drink in the magic that shines from within. 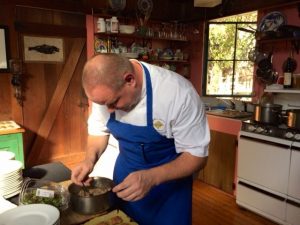 A magician in any kitchen, Chef Jerry Regester of Lucia Preserve, prepared a rich and delicious cassoulet packed with pork belly and duck, topped with beautifully seared tuna. Every bite was melted goodness, accentuated by the blithe spirit of the Albatross Pinot.

One lucky member of our merry band of mystery seekers had the good fortune to pick the winning raffle ticket for a limited edition Weston print. Zach also touchingly bestowed one on Aengus, who was momentarily speechless.

Some of the group hung out on the hand-tiled back patio by the firepit, others drank in every word as Zach explained the development process, while the rest of us soaked up the strong sun gleaming over the Pacific on the front deck, savoring the last dram of wine in our glasses before we reluctantly rejoined the previously scheduled program known as the rest of our lives. 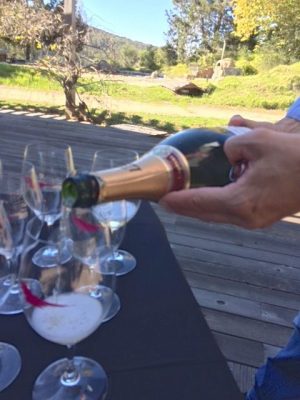 We so need moments like this, when the magic and the mystery that used to shamelessly inhabit every single hour of our young lives is restored, even if briefly. It does the soul good.

Mark your calendars right now for the 2017 Big Sur Food & Wine Festival, which will take place Nov 2 – 4, 2017. Visit the event website to sign up for the mailing list.Tickets to this event would make great holiday gifts: hint, hint!!

Make sure to sign up for one (or all) of the Magical Mystery Tours, or Hiking With Stemware. This is a bucket list event, if there ever was one, combining the Best of the West with end of the earth awesomeness. There’s no guarantee that any of the sites visited in 2016 will reappear on the 2017 roster, but you can be sure of a most unforgettable experience: and more than a little magic and mystery.