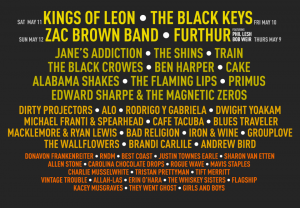 On Wednesday evening, May 8, emerging musical artists Macklemore and Ryan Lewis (with special guests) will warm up the festival with their infectious blend of hip hop, humor, and heart. The show is available to all 3 and 4 day BottleRock festival pass holders and individual tickets will be sold to this show as well.On May 9, BottleRock Napa Valley will officially begin. Each day will include a stellar lineup of many of the most sought-after and established names in music sprinkled with an exciting array of emerging performers, creating a one-of-a kind music and comedy extravaganza that will be the signature of BottleRock Napa Valley. On Thursday, Further featuring Phil Lesh and Bob Weir,The Black Crowes, and Primus will energize the crowd on the first full night of BottleRock Napa Valley. Friday brings multiple Grammy Award winners and nominees, including The Black Keys, the Shins, Alabama Shakes, and more to the main stages. On Saturday the headliners include Jane’s Addiction, Bad Religion, Ben Harper, Edward Sharpe and the Magnetic Zeros supported by many others. Sunday’s schedule closes the weekend with a full lineup anchored by the Zac Brown Band, Cake, and Rodrigo y Gabriela.

“The genesis of BottleRock springs from the great live entertainment gift that is the Uptown Theatre. The long awaited downtown Napa renaissance has inspired us to bring an eclectic and broad group of world class music and performers to our home town.The Napa Valley has set such a high standard for wine, food and hospitality that we feel that the time is right to add an amazing music festival to the mix. It will be great to see foodies, wine lovers and BottleRockers exploring the Valley by day and then coming together in downtown Napa for an evening of after parties. BRNV will be a different kind of music festival by virtue of its location in the Valley and Downtown Napa. Where else will you see winemakers, chefs, and artists mingling with patrons before, during and after the music? The chance to raise money for all of our community and charitable partners is really exciting and motivating as well.”

Limited pre-sale passes go on sale Sunday, February 3 through February 9, 2013 (or until sold out) for Napa Valley locals, artist fan club members, community partners, and more. General 3 and 4 day passes go on sale beginning February 10, 2013. To celebrate the San Francisco 49ers return to the Super Bowl,  “Friends of the 49ers” pre-sale passes start at $249 and are available from February 3 – 9 or until sold out. General BottleRock Napa Valley festival passes will be available February 10, starting at $299 for the 3-day (Fri-Sun) festival pass, $399 for the 4-day pass (Th-Sun) and $599 for the 4-day VIP Reserve pass.  Festival passes can be purchased at www.bottlerocknapavalley.com.
Share10
Tweet
Share