7 Wines from Burgundy (Bourgogne) Under 30 Bucks 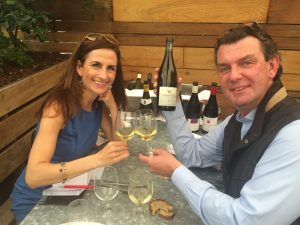 Last month, I was invited to lunch with Amaury Devillard, a well-known wine producer in Burgundy. A native Burgundian, his family has owned vineyards in the respected French wine region since the 12th Century.

He believes global warming is real in Burgundy and says harvest now comes 15 days earlier than it did in the 60’s. They practice what in France is called Luttes Raisonnées (literally “reasoned fight” in English), a farming philosophy which allows treatments of the vines only when absolutely necessary.

“The day we know exactly what’s going on, we lose the spirit of Burgundy. ” Amaury Devillard

In 2005, Amaury founded, along with his sister Aurore, the Société Amaury et Aurore Devillard, taking over the distribution of the family’s Domaines: Château de Chamirey, Domaine de la Ferté and Domaine des Perdrix. Today, the Company also handles the distribution of Domaine du Cellier aux Moines and Domaine de la Garenne. In all, 70 hectares (173 acres) of vines and 450,000 bottles, sold in France and in 50 countries around the globe.

On May 17th, Amaury and I dished the dirt at Starbelly (one of my favorite hidden gems in San Francisco) to taste and talk about Burgundy’s hidden wine gems. How appropriate! Amaury says he has found an answer to people who claim Burgundy wine is too expensive and here are seven of them!

7 Wines from Burgundy (Bourgogne) Under 30 Bucks

*Most of wines are available for purchase at K&L Wine Merchants. With the exception of 2012 Château de Chamirey blanc which is available at Total Wine & More. I don’t have affiliate links or get any sort of compensation for telling you this. I’m only including it because I find it really annoying when I read a story about something and have no idea about where I can buy it.

Amaury is actively involved in the protection and the promotion of the wines of Bourgogne (Burgundy) and he currently holds the following positions: