Picking up a bottle of California Pinot Noir or Chardonnay and sitting down for a fabulous dinner at one of San Francisco’s best restaurants like State Bird Provisions or Bar Tartine sounds like a match made in food and wine heaven. Well, that was how many wine enthusiasts spent their Summer Saturday in Sebastopol a few weeks ago. West of West Wine Festival is put on by West Sonoma Coast Vintners who are passionate about farming wine grapes on the coastline of Sonoma County. The West Sonoma Coast, part of Sonoma County, has distinguished itself as one of the world’s leading regions for top quality Pinot Noir and Chardonnay.

“I’m from the school of drink what you like and eat what you like but some things make more sense together. Create a circle if you are buying Sonoma wines think in a Sonoma way.” 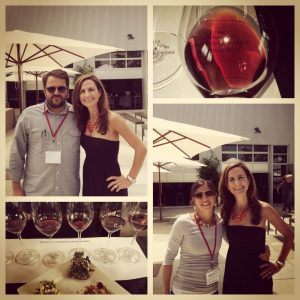 In this video, Wine Oh TV’s Monique Soltani interviews Stuart Brioza from State Bird Provisions who says SBP started out as a recipe and ended up being a restaurant. Monique chats with Cortney Burns from Bar Tartine who says she and Co-Chef Nick Balla want try and make everything from scratch. They cook food that they want to eat, that is delicious, and keeps people interested so their guests don’t get board. Then it’s time for wine, with Charles Heintz who says growing grapes in the fog will have you seeing clearly. Charles Heintz Vineyard has been family owned since 1912.

Then the self proclaimed Great Granddaughter of the Original Jackass, Regina Martinelli tells us how a love story turned into a wine legacy. The Martinelli family has been growing grapes in Sonoma County since the 1880’s.