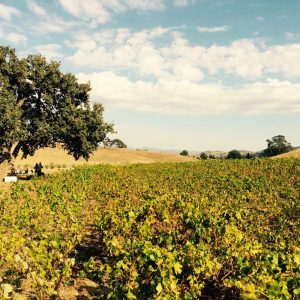 The Day of the Doon event at Bonny Doon’s ethereally beautiful estate out in the rolling hills of San Juan Bautista, could have been subtitled “The Never-Ending Charlie Parker and Randall Grahm Reunion Continues.” Or, perhaps, “Outstanding in the Field of Dreams” would be a more accurate moniker.

Nonetheless, here at Popelouchum (pronounced “pop-loh-SHOOM”), the Mutsun word for paradise, it was a righteously Indian Summerlike afternoon with hints of fall. As the day morphed into a brilliant evening, accentuated by the natural beauty of the setting, it made an ideal backdrop for the magical spread created by Jim Denevan, Eden Reilly and the Outstanding in the Field Crew.

Much-loved and renowned Executive Chef, Charlie Parker himself, was in command of the kitchen fires as the tents glowed with the flames. Parker, now of Haven in Oakland, was formerly Chef at The Cellar Door in Santa Cruz, Randall’s previous culinary endeavor. The Dooniverse is nothing if not expansively circular. 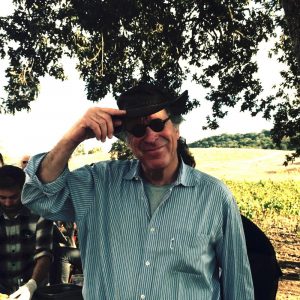 And, it was also part Sermon on the Mount of Grape Expectations by the high priest of vineology, Grahm himself. He exhorted the faithful with his vision of creating the perfect grape varieties to express the true terroir of this special property, with which he fell hopelessly in love and purchased in 2011. To this end, he is planting grapes from seeds, cultivating a drought resistant stock from Texas, and ultimately hoping to breed what he calls “a beautiful variety.” Something completely new and unique to place.

As a whole, the event offered equal parts of food for the soul, food for the body and food for thought. We learned that Nicole Walsh, Bonny Doon’s head winemaker, who has been piloting the beverage section of this airship for the last 15 years, is busily tilling and toiling on the land. In preparation for El Nino, she’s making ready the nearly empty pond and installing drainage, all while cultivating 80 raised beds of every kind of vegetable, along with prodigious cover crops, a giant cornfield and clusters of espaliered fruit trees. The bounty of it all was showcased on the menu.

She’s also preparing to plant vineyards, mostly Grenache Noir and Gris, along with Furmint, a current fave of Randal’s. She says, “We want to do more food pairings! And we want to create a diverse polyculture, with as many crops as possible.” She explained that this is beneficial in that a complex system creates its own order. Grahm remarked that the target is a self-governing, self-regulating system. Someone in the audience remarked, “That sounds like New Hampshire!” 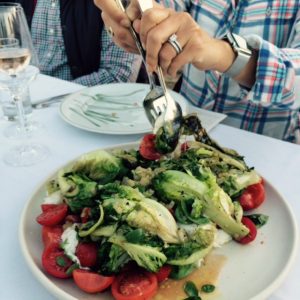 But we were far from New Hampshire out there in the lower 40 of the 280 acre parcel that lies somewhere between the mission town of San Juan Bautista and the sprawl of Silicon Valley. As the sun ducked into the clouds, we sat down at a very lengthy table of nearly 200, to share sumptuous platters of family style fare, beginning with tomatoes and basil harvested that day from the very soil of Popelouchum, grilled farm gem lettuce, fennel confit and fresh-made burrata, dressed with Olio Nuevo from an Indian tribe in the Capay Valley that had been Fed Ex’d earlier to Susan and Mike Pappas, of the True Olive Connection in Santa Cruz. Golden-green and glowing with buttery spiciness, this was so divine, I wanted to pour it on everything.

Next up was an exceptionally moist and tasty grilled king salmon, with spicy charred farm cabbage, smoked eggplant, Padron pepper succotash and cilantro, paired with the 2013 Cigare Blanc, a rich Rhone blend. 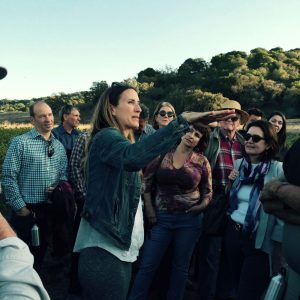 The shining star in the wine constellation for the evening, as a crescent moon winked through fingers of fog, was the 2005 Cigare Volant, presented in magnum. It showed its younger brother, the 2011 version, presented in Jeroboam, that size in this case, matters not so much as age. The smokey, earthy, slightly tarry, timeworn grittiness of age outclassed the youthful sassiness and fruity charms of the 2011, making a forthright match for the leesy Grenache-braised short rib, with whipped farm potato, new red onion, spicy pickles and garden chimichurri.

Only Randall Grahm could pull off a stone-brilliant party in the middle of nowhere, with hay bales for chairs and a prayer to the weather gods for cooperation. He’s clearly performed sufficient purgatorial penance and recited the prescribed non-specifically agnostic novenas to have arrived at the altar of possibility bearing more than just hope. This time, it seems, he really does have a plan. A plan that might actually work. Only time will tell if that holy grape born of botanous desire will burst forth from these hallowed hills.