2014 Appellation Collection: Give the Gift of Good Wine that Gives Back 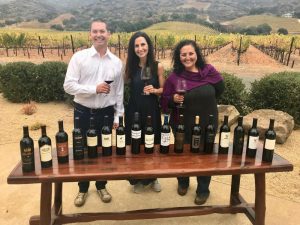 In this episode of Wine Oh TV, Monique Soltani heads to the Napa Valley where the wine community has come together rebounding after wildfires rocked the region. Find out what impact the fires will have on the 2017 vintage, hear first hand from winemakers who fought to save their vines, and discover how giving the gift of good wine could help give back to our neighbors in need.

How did the Stags Leap District fare in the wine country fires?

The Stags Leap District was impacted by the Atlas Peak Fire as flames came fast and furious over the ridge and down the Palisades along the eastern side of the district. Fortunately damage to the wineries and vineyards of the district was minimal.

Purchase at www.stagsleapdistrict.com/appellationcollection
or Contact Executive Director, Nancy Bialek, at (707) 255-1720.

The 2014 Appellation Collection includes one bottle of each of the following Stags Leap District-designated wines:

Tickets for 2018 will be released online February 14.

Begin Vineyard to Vintner weekend on Friday evening with an extraordinary food and wine experience in Stags Leap District. Winery owners and vintners will be digging deep into their cellars to share their most cherished library wines for this intimate dining opportunity. Choose among dinners at Baldacci Family Vineyards, Chimney Rock Winery, Stag’s Leap Wine Cellars and Stags’ Leap Winery as four celebrated chefs create cabernet inspired menus. Each venue will provide an unforgettable night of world class wines and neighborhood hospitality.

This District wide event gives you entrée to our most historic properties and our newest members. Begin at a starting point of your choice and wind your way up and down the Silverado Trail from winery to winery. Your V2V pass gives you exclusive access to our vintners and winemakers. Discover winery caves, enjoy special barrel tastings, explore the cellars and enjoy food and wine pairings not available to the public.

At Your Leisure • Casual • Choose from 17 member wineries

Wrap up the weekend as Regusci Winery hosts a fabulous farm-to-table lunch over the ranch’s sprawling acres with the District’s vintners. Be one of the first to taste the critically acclaimed 2015 Cabernet Sauvignons included in the 2018 fall release of our Appellation Collection and much, much more! Once the band kicks up, we know it will be tough to leave.