Fabio Viviani is probably best known as the Fan Favorite on Bravo’s hit show Top Chef, but this celebrity chef has just earned a new title of New York Time’s best-selling author for his recently released cookbook Fabio’s Italian Kitchen. In the book, Fabio Viviani shares 150 family-inspired recipes, stories from his childhood, and the secret behind real family cooking.

Fabio Viviani’s claim to fame might have came via reality TV, but he is far from a fad. This Florence born Italian stallion started working in restaurants at the age of 14 and has been making his mark in and out of the kitchen ever since. Viviani came to California when he was 27 years old and owns two popular Italian restaurants in the Golden State: Cafe Firenze and Firenze Osteria. In February 2013, Viviani decided to tackle the windy city opening Siena Tavern in Chicago. The sexy and chic urban tavern is already a hit with hipsters and foodies alike.

In this video, Wine Oh TV’s Monique Soltani interviews Fabio Viviani and find out what ingredients get him excited, the secret to making your recipes sizzle, and finds out Fabio’s favorite food and wine pairing and most memorable food and wine moments! 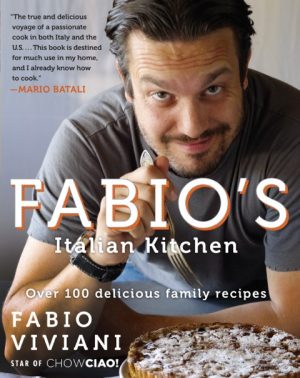 When Fabio Viviani was growing up in a housing project in Florence, Italy, the center of his world was the kitchen, where his mother, grandmother, and especially his great-grandmother instilled in him a love for cooking and good food.

Now he shares the best of Italian home cooking while telling the story of his hardscrabble childhood, his success as a chef in the United States, and the women in his family who inspired him. In more than 150 delicious recipes, Viviani takes us from his family home, where his great-grandmother taught him to make staples like Italian Apple Cake and Homemade Ricotta, to the kitchen of a local trattoria, where he honed his craft cooking restaurant favorites like Gnocchi and the Perfect Tiramisu, and then across Italy where he studied each region’s finest recipes, from Piedmont’s Braised Ossobuco to Emilia Romagna’s Perfect Meat Sauce.

Fabio’s Italian Kitchen ($24.99) is a celebration of food and family that brings all the joy, fun, and flair that Fabio Viviani embodies to your kitchen. To purchase CLICK HERE!