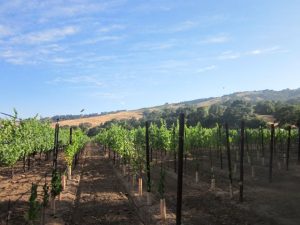 The Anderson Valley is blessed with an abundance of beautiful vineyards: most are perched on hillsides, overflowing like a fermentation bin with overactive yeast. But some are in swales and flats, making for easier farming, but for the persistent threat of frost in the spring.

Such is Ferrington Vineyard, one of the largest in the Valley at 78 acres on a 160-acre parcel. Purchased by Bay Area builder Kurt Schoeneman, whose daughter, Sarah, helped him locate this idyllic vineyard spot in 1996, the property sports Chardonnay, Gewurztraminer, six clones of Pinot Noir (for a total of 45 acres) and Sauvignon Blanc. The property, part of a former 6k-acre sheep farm, had been planted in the 60s and 70s as part of a tax shelter, and had been allowed to go fallow by Dr. Ferrington, the former owner. Says Kurt, who lives here with his wife, Heather,

“I wanted a bucolic lifestyle. I’d spent my summers as a kid at a cabin my Dad bought for $750 near the Russian River: we spent the entire summer barefoot. The first couple weeks were always a little rough! I looked at land in Alexander Valley, Mendocino and almost bought a Chardonnay Vineyard in Potter Valley, but it fell through. This place was a wreck when I found it: nearly 70 acres of vines were dead. But I loved the setting.” Kurt Schoeneman 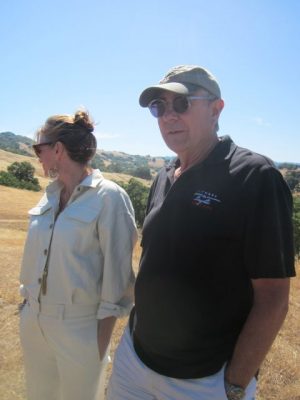 Nearly two decades of loving care have gone into making this place a preferred source of Anderson Valley fruit, and today, the Ferrington Vineyard is well known throughout the California wine world, with wineries like Williams-Selyem, Schramsberg, Flowers, Foursight and Arista making wines made from Ferrington fruit. Vineyard-designate Pinots from Ferrington have consistently received 90+ points from wine reviewers, and Handley Cellars incorporates it into their highly popular Anderson Valley Pinot. MacPhail’s 2005 Ferrington Vineyards Pinot Noir was listed in the San Francisco Chronicle’s top 100 wines.

Content to be farmers, the family has never created and bottled a wine for sale under their own label. That changed this year with the inaugural release of the Fathers & Daughters Cellars Pinot Noir and Sauvignon Blanc. The label represents a collaborative effort of the “fathers and daughters” in the family: Patriarch Kurt Schoeneman, his daughter Sarah, Sarah’s husband Guy Pacurar, their daughter, Ella, and Guy’s older daughter, Taylor, who works at Arista. 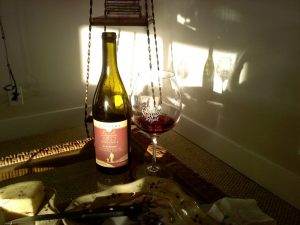 Much like wine, relationships mature and evolve over time, and the relationship between a father and daughter, like the fruit from the Ferrington vineyard, is both singular and special. This collaboration is a labor of love with the ultimate goal being the production of small quantities of fine wine and the creation of a legacy business that can be passed down through the generations.

Choosing to make Pinot Noir from three of his favorite clones, Pommard, 667 and 2A (aka Wadensvil), Guy Pacurar, proprietor of the spectacular Brewery Gulch Inn on the outskirts of the town of Mendocino, envisioned a tribute to his newly arrived baby daughter, Ella. Guy and Sarah tapped the talents of local winemaker, Phil Baxter of Baxter Wines, to put his legendary light touch to work in preserving the freshness and integrity of this excitingly floral wine.

The label of the 2012 Fathers & Daughters Pinot Noir, Ella’s Reserve, harvested on September 7, 2012, from the Ferrington vineyard, commemorates the birth of Ella just a few months prior, on July 23. She accompanied her parents as they harvested the grapes for this wine, rising at 4 AM to pick the fruit and sort it into bins.

Today, she seems more interested in her yellow sandals, yellow Porsche Matchbox car and her embroidered beanbag pillow than the vineyard at present, but one figures that with her parents vibrant interest in food, wine and hospitality, she will quickly garner a love for the farming side of life in rural Anderson Valley.

“We had no idea how much this name and the concept behind Fathers & Daughters would resonate until we began pouring the wine, first at the local Anderson Valley Pinot Noir Festival and then at LA Winefest. We knew the wine would stand well on its own, but we weren’t sure if people would gravitate toward it. In both instances, fathers and daughters alike were drawn to our table because of the name and the memories of their relationships that it triggered.” Guy Pacurar 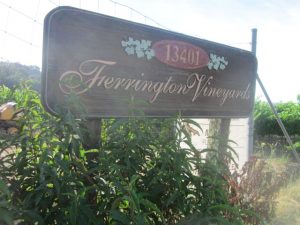 The 2012 Pinot Noir and the 2013 Sauvignon Blanc are the first two wines produced by Father & Daughters Cellars, and were released for sale on Father’s Day of this year. The Sauvignon Blanc, made from a block of 40 year-old vines that produce a taste of the tropics, is priced at $25.00, and the Pinot is $42.00.

Production will run between 60-100 cases per varietal. The wines are primarily available through a mailing list (capped at 500), and are also available for purchase by contacting the winery direct at 707-813-1137 or pacurar.guy@gmail.com. Subsequent releases will include a 2014 Chardonnay and 2015 Gewürztraminer, also sourced from the Ferrington vineyard.

“We’re embarking on a multi-generational adventure, exploring three of the best things in life. Fathers, daughters and wine.” Guy Pacurar

That’s something worth toasting with one of these wines:

From the oldest vines on the property, comes this light, well-balanced, refreshing and garden-fresh wine. The elegant nose opens with delicate orange blossom, jasmine, cantaloupe and a hint of jalapeno pepper, not unusual for this variety. Flavors of juicy fresh apple, lychee, starfruit and mandarin dominate, and the round, soft mid-palate reveals gently roasted pistachios and cashews, adding a layer of complexity and texture. No doubt about it, this wine has a refreshing, bright finish filled with flinty minerality and a satisfying zestiness.

A highly exotic aromatic profile sets the stage for this enticing wine, that exudes floral notes at every turn. There’s damp earth, baking spice, tea roses, cardamom, Damson plums, bergamot and hibiscus on the nose, and what a nose it is: endlessly captivating. Boldly bright, with flavors of pomegranate, cola, cherry, rhubarb-walnut compote, ollalieberry pie, trumpet mushrooms and black tea, there’s an underlying richness on the supple and energetic palate that indicates a wine that will reward cellaring.

The inclusion of whole clusters during fermentation delivers a velvety mid-palate, and an overall texture that is lean and lush at the same time, running the gamut of a summer-fresh fruit basket and a walk in the redwood forest on a sunkissed morning, when the fog is just lifting. Altogether an elegant and provocative wine that keeps slinking like a cat behind the bushes, waiting for the next opportunity to pounce.