Food and Wine in America 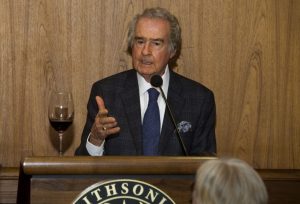 Legendary Napa Valley vintner Warren Winiarksi presented his philosophy that winemaking around the world should focus once again on balance and proportion. Winiarski spoke to an audience of VIP guests attending a fundraising dinner for the Smithsonian Museum in Washington, D.C., which is celebrating the opening of the first major exhibit on American food and wine.

Winiarski is founder of Stag’s Leap Wine Cellars and winemaker of the Cabernet Sauvignon that bested France’s wines in the historic 1976 Paris Tasting. That win not only raised awareness of the quality of wine made in California, but of American wine in general. A bottle of Winiarski’s 1973 S.L.V. Cabernet Sauvignon is on display at the museum. Warren Winiarski and his family are sponsors of the food and wine exhibit entitled FOOD: Transforming the American Table: 1950-2000. Other renowned vintners joined the fundraiser gala, held to raise monies for the exhibit itself, including Margrit Mondavi, Joel Peterson, Violet Grgich on behalf of Mike Grgich, and Robert Biale.

Warren Winiarski on the exhibit


“The history of the American wine industry is a part of our history and a key element of the future. “I strongly support the Smithsonian and their exhibit on American Wine and Food, and I am honored to be a part of it.” 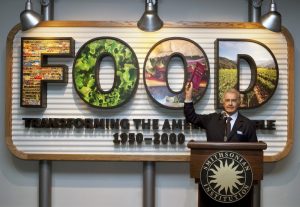 The FOOD exhibit is open at the Smithsonian’s National Museum of American History. Visitors will view 160 artifacts that tell the story of how innovations and new technologies, along with social and cultural shifts, helped transform food and its production, preparation, and consumption—as well as what we know (or think we know) about what’s good for us. Among the major components of the exhibit is a communal table where visitors can engage in conversation about one of our favorite cravings: food.

The exhibit will run indefinitely, and more information can be found at americanhistory.si.edu or by calling the public line at (202) 633-1000.