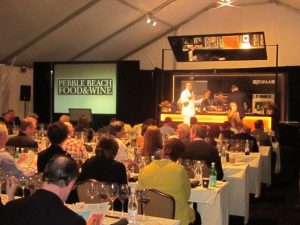 Four days of epicurean overload can do you in. In Pebble Beach you have to pace yourself. Attending seminars and lunches can really give you some precious and meaningful insights into what makes this food and wine business so insanely attractive, and will also lead you to discoveries that you’d never otherwise encounter. I treasure those little tidbits more than the chance to gorge myself on every manner of interesting and unusual food tidbit, like fried oysters Rockefeller, head cheese croquettes (Moody’s, Truckee) or burnt spam on toast (Chef John Cox, Sierra Mar), although those are fun, too.

1. Tennessee’s Blackberry Farm Sommelier and Director of Food and Beverage, Andy Chabot, began his Pebble Beach presentation at The Blackberry Farm Cellar Raid seminar by announcing, “Bacon is a vegetable where I come from!” An audience member quickly chimed, saying he was from Memphis, where pork is considered a vegetable, and so can be eaten on Fridays during Lent, in lieu of fish. Hmm. 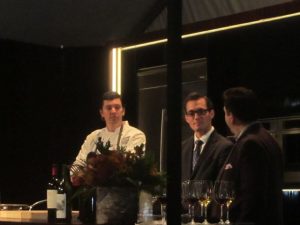 2. Andy Chabot also keyed us in on aging white wines, especially Chardonnays, saying that after 6 or 7 years, they can go through a really oxidative funk: an unruly teenage phase. They then recover, going on to higher levels of brilliance as oxidation slowly turns them into spun gold, which explains why the 1995 Maison Leroy Chassagne-Montrachet was tasting so amazingly filled with honey, hazelnuts and lemon peel. This nearly 19 year old wine had already been through its teenage funk in the bottle, and was now cruising for perhaps another 10 years of life, but seriously, why would you hang on to it when it tastes so awesome right now? 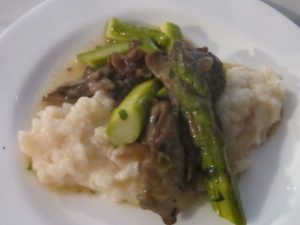 3. At Pebble Beach Wine Educator, Anthony Giglio, noted that contrary to popular belief, asparagus is not a wine killer. It goes beautifully, in fact, with Gruner Veltliner, Sauvignon Blanc and by the way, with aged Chardonnays, especially if accompanied by southern gold rice grits and smoked onion jam.

4. Also from Giglio: If you’ve got wine older than 20 years in your wine cellar, you’d best start tasting it. It might have left the building. If you tend to buy cases at a time, make a spreadsheet to track your wines, sampling one as soon as you put it in your cellar, and then one every year or so to see where it’s headed. South, in this case, is not good.

5. From Blackberry Farm Executive Chef Joseph Lenn, comes this fundamental, mostly ignored, advice on perfect food and wine pairing: Taste the wine first. Figure out if it’s missing something, like acid. His philosophy is to elevate the wine, either by accentuating a certain aspect of it, or by filling in what it’s missing. He’ll often add vinegar to dishes when pairing them with Rhone varieties like Viognier, Roussanne and Marsanne, while he’d rarely do that when serving Sauvignon Blanc or a high acid Chardonnay. And he almost always uses grapeseed oil when searing things like fat back and pork, for its high smoke point. When cooking quail eggs, go for more done. 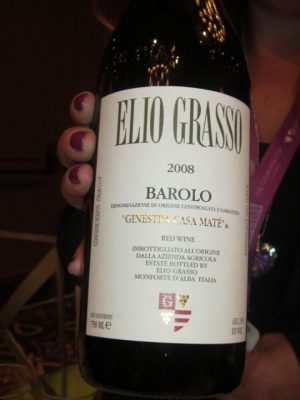 6. As proven in the glass by wine writer, Antonio Galloni, the 2008 vintage of Barolo from Piemonte, is already quite accessible, with examples from Elio Grosso, Elvio Cogno, Bartolo Mascarello, Luciano Sandrone and Giuseppe Rinaldi showing brilliant promise and immediate drinkability, due to one of the longest growing seasons ever. The best Barolo’s, which are 100% Nebbiolo, come from high, steep mountain terrain and poor volcanic soils.

7. Traditionally, Barolo was kept on the skins for 2 to 3 months, while the other fall harvesting chores were completed. They were aged forever and a day, often in slovenly Slovenian casks, and the Piedmontese gave each other Barolo as Christmas presents, much like we used to trade holiday fruitcakes. However, in the last 10 – 20 years, younger vintners have been eschewing tradition and barreling for only a year or two. Some are even using French barriques. Will wonders never cease?

8. The signature marks of Barolo include a translucent red going to amber rose color, aromatics of rose petals, lilac, fennel, balsam, tar, white pepper and cigar, and flavors of red cherry, red plum, graphite, dried porcini, flint, pepper, lavender and tarragon. Well made, they are electric, racy, exciting, transformational, mind blowing and viscerally thrilling: like a Ferrari. These are not the wines to open for your buddies coming over to watch a football game, dude. Instead, pair them with white truffle risotto with pecorino, grilled veal chop with rosemary or chicken roasted in truffle butter, which happens to be a Restaurant 1833 specialty. 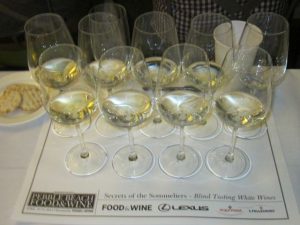 9. When blind tasting white wines, Master Sommeliers Shayne Bjornholm and Gillian Balance remind you that color is your first key. If it’s got a slightly gold color, this usually indicates oak, and you can rule out many varieties that are typically made without it. Slightly greenish can be pinot grigio, while slightly copperish could mean pinot gris. Aromatics are filled with clues. Rieslings almost always have petrol in the nose, while Torrontes has a signature white linen perfume aroma and Early Grey tea signature. Pay attention to acid, as it clues you in to cooler vs. warmer regions. Keep practicing. It’s fun and you’ll eventually be able to guess old world vs. new world along with the best of them.

10. Some of the most amazing $10 wine bargains in the world are from Spain, because they’ve been asleep at the wheel while the rest of the world has been flogging their wares and building identity and value. Look to Espana for the best values in Garnacha, both white and red, as well as Tempranillo and GSM blends. Here’s to the wonderful world of wine and Pebble Beach Food and Wine!