We Have Found the Perfect Wine Label for Father’s Day 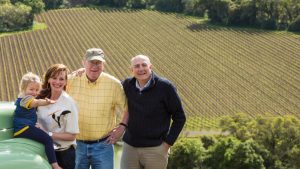 Looking for the perfect wine for Father’s Day? Two words: Fathers + Daughters Cellars, OK that’s three words but you get the point.

The party of five wine family, hopes that through their wine, they can share with you some of the magic of a very special vineyard.

Fathers & Daughters Cellars is one family’s labor of love to produce artisanal wines from the Anderson Valley’s storied Ferrington Vineyard. Small batches, carefully crafted and fermented using old-world techniques, yield wines that are truly reflective of their terroir. Like the relationship between a father and daughter, these wines will continue to evolve as they mature.

All of the Fathers + Daughters wines are made with grapes that come from Ferrington Vineyard in Mendocino County’s lauded Anderson Valley, with the fruit from this particular vineyard achieving an almost a cult-like status. While extolled wineries such as Williams-Selyem, Schramsberg, Flowers and Arista have long produced wines made from Ferrington fruit, it wasn’t until 2015 that the family that owns the vineyard created and bottled a wine for sale under their own label.

Much like wine, relationships mature and evolve over time, and the relationship between a father and daughter, like the fruit from the family’s Ferrington vineyard, is both singular and special. This collaboration is a labor of love with the ultimate goal being the production of small quantities of fine wine and the creation of a legacy business that can be passed down through the generations.

The winery decided to announce their new releases just in time for Father’s Day Yeah!


“Imagine a sparkling without the pretense or the price, and the antitheses of those restrained sparklings produced in the méthode champenoise-style. Our rustic sparkling chardonnay ferments in-bottle without the aid of disgorgement, dosage or secondary fermentation, and opening each bottle is a surprise, evocative of the time and place where it was created.

It is unpredictable, extroverted and deeply satisfying on a very visceral level. Sarah’s Rustric Bubbles exhibits cidery characteristics that bridge the chasm between beer and wine, and it’s a great sparkling for brunch, casual celebrations or back-deck toasts.” – Guy Pacurar, Father’s + Daughters Proprietor 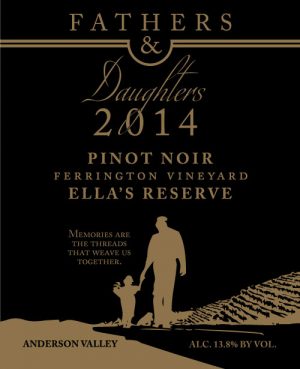 The reputation of the Ferrington Vineyard is rooted in Pinot Noir with vineyard-designate Pinots produced from Ferrington fruit consistently receiving 90+ points by wine reviewers. Less well-known is the fact that the vineyard also contains a block of 45 year-old Sauvignon Blanc vines whose fruit yields a wine with decidedly tropical notes, and outstanding blocks of Chardonnay and Gewürztraminer as well. New to the family party this year is a hard cider, made with the fruit of apple trees from the vineyard, and a petillant naturel, which happens to be daughter Sarah’s favorite style of wine.

Talented winemaker Phil Baxter of Baxter Wines is responsible for crafting each of Fathers + Daughters offerings. Known for taking a light approach in winemaking and allowing the fruit and terroir to speak for itself, Phil ages his wines primarily in neutral oak or stainless steel to ensure that the signature characteristics of the fruit and its terroir are not masked.