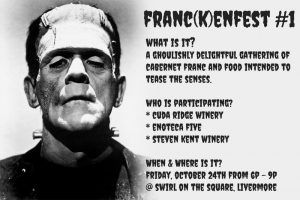 What wine would Frankenstein drink? Why, Franc, of course. In honor of the approaching holiday of ghastly ghouls and costumed fools, trick or treaters and marshmallow pumpkin eaters, the fun folks at Swirl in Livermore decided to concoct a special treat for local wine lovers.

They’d like to invite you and your merry band of pranksters to “Francenfest” at Swirl On the Side at Blacksmith Square, Friday October 24, from 6 to 9 p.m. Some of the Valley’s premiere Cabernet Franc producers, Cuda Ridge, Enoteca 5 and Steven Kent will be sampling their tasty, tempting and totally seductive 100% Francs.

Tasting fee is $5, and all three will be selling their Cab Franc by the glass and bottle that evening. Costumes are optional, but a prize will be awarded for the most Frankenstein-like impersonation, so dusty off your monstrosity suits and prepare for some freaky fun. There will also be a raffle for a 3-bottle “Francen Pack.”

Meredith McHenry will perform live from 8 – 10 p.m.. RSVPs are encouraged.

Cabernet Franc is a variety most typically used for blending and largely passed over by Bordeaux aficionados who desire more tannic monsters in their large-bowled Riedel’s or Spiegelau’s. However, devotees of the grape are beguiled by its winsome perfume and incense-laden aromatics, its lithe and silky texture and its slightly cooling finish that often carries pleasing hints of mint or menthol. Truly there is nothing more food friendly or captivating than a well-made Cab Franc.

Just recently, I judged the Santa Cruz Mountains Wine Competition, and oddly enough, the wines my entire panel fell head over heels in love with were the three wines in the Cab Franc flight. We were captivated by their suppleness, elegance and transcendent pine forest and raspberry field aromas that wove throughout the fabric of their soft leather and sweet cherry tobacco flavor profile.

Livermore, as it turns out, is pretty perfect for Cabernet Franc, too. It’s well known that Steven Mirassou is as passionate about making the best possible Bordeaux from Livermore as Elon Musk is about building sleekly elegant electric cars and sending people to Mars.

You cannot fathom the devotion this man pays in the making of Lineage. But we all know that a great blend needs divine componentry, and one of the keys to the Lineage kingdom is for me the Cabernet Franc. The vintages where the Franc factor is highest are almost always the ones that make me swoon.

So, too, Michael Chalkley’s unrelenting pursuit of Franc perfection is something to behold, admire and consume with great delight. Although he makes just enough of the other four Bordeaux varieties to construct the perfect rendition of each — hence the name Enoteca 5 — it’s Franc that captured his heart.

Anybody who’s been within an inch of Larry Dino knows he’s also a card-carrying member of the Francophile Society. Some of his best Cuda Ridge wines have frankly been Franc. Come check out his latest effort.

Many wineries in Livermore make this variety, including 3 Steves, Occasio, Murrieta’s Well, Ruby Hill, Wood Family and Bodegas Aguirre, but many were already sold out of it, which tells you something. So, make it your “Francenfest Quest” to not only attend the event on Friday, but to seek out the rest of the winemakers who are as besotted by this grape as the three you will meet at Swirl.