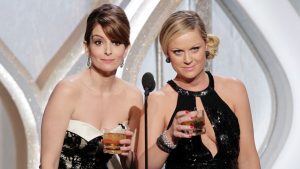 The Golden Globes are this Sunday and Tina Fey and Amy Poehler are upping their game and updating the rules on the Golden Globes Drinking Game! Sunday the official 2014 award season kicks off in Hollywood, with the 71st Annual Golden Globe Awards. If you are anything like me you love television and movies nearly as much as you love wine.  Each year, I grab a glass (make that a bottle) of my favorite bubbly, curl up on the couch and watch the stars strut their stuff in style. Sunday night, I’m pairing the star-studded event with a bottle of Veuve Clicquot Ponsardin and plan on time taking part in the Golden Globes Drinking Game. I hope you join me in playing along with Golden Globes Hosts Amy Poehler and Tina Fey.

“Any time you see a gown with sleeves, you’re going to drink. Any time they cut to Tom Hanks for a reaction shot, do five push-ups and you will be ripped by the end of the ceremony.”

“Every time I drink, everybody at home should drink. And if Bryan Cranston speaks, everybody has to do a little bit of meth. Just a touch, because that’s all you need, just a touch.”

If you are 21 and over check out the full rules from last year!

Drink any time you see a person actively not listening to someone else.

Drink any time someone says, “I didn’t prepare anything!”

Eat a meatball sub any time someone thanks Harvey Weinstein.

Take off an article of clothing any time they show Judi Dench.

Take off an article of clothing any time Maggie Smith wins.