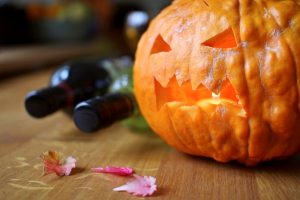 As grizzly ghouls prowl through the night, monsters lurk behind shadows of decrepit trees. Behind a dark corner, an evil ghost is lurking and following my every more. I start to run. My heart pounds in my head as footsteps trail close behind. I stop to face the beast. With dripping blood, an axe swooshes through the dark of night, narrowly missing me. Panicked, I run! A light in the distance can be seen through the eerie fog. Faster I run, until I catch up to the light. Peering inside, I see a swanky wine bar! But the customers inside are not your normal patrons. Dracula is sitting at the bar sipping on a glass of red wine, The Wolf Man has a flight of three, and at another table sits a witch, Leatherface, and Godzilla laughing over a bottle of wine. I wonder, is this where monster’s go after a night of pillaging and murdering? What wine might these crazy characters be sipping? As the monsters see me spying on them through the window, they grab their weapons and slowly surround me. I shout, “Wait! I can recommend some great wines for you. I am with Wine Oh TV!!” Piquing their interest they slowly retreat and hand me a menu and I begin to recommend wines, hopefully sparing my life for just a little while longer… 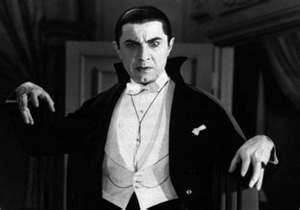 Vampires are mythological monsters who feed on the life essence or blood of humans. One of the most famous and Gothic monsters of the living dead is Dracula, a star in the book written by Bram Stoker in 1897. Dracula went on to movie fame stardom over and over again and his story inspired dozens of remakes and off-shots. Because of a vampire’s affinity for blood, Sangiovese would be the perfect pairing. With its bright, red-blood color, the name of the wine translates to “blood of Jupiter,” a god in ancient roman times.

Wine Pairing: 2007 Guglielmo, Sangiovese, Santa Clara Valley, California Aromas of ripe dark cherry and plum, with notes of leather, pepper, anise and cranberry. The palate pleases with notes of bright acidity and flavors of Bing cherries and spice with an extended finish. 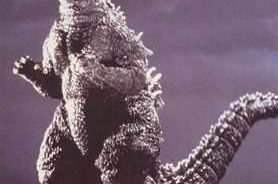 Godzilla is the most notable Japanese movie monster. Described as half dinosaur, half lizard, Godzilla’s atomic breath of fire is his true weapon and he is able to survive underwater, as well as on land. First appearing in Ishirō Honda’s 1954 film Godzilla, he has gone on to become a worldwide pop culture icon starring in 28 films including video games, novels, comic books, and a television series. Even though Godzilla kills human with his fire-breathing doesn’t mean he likes the taste of humans. Supposing he is an omnivore like some of his ancient relatives, he would have an affinity for all things green and leafy. Perhaps a nice Sauvignon Blanc would be the perfect aperitif for this horrific dinosaur.

Wine Pairing: 2010 Domaine Cherrier & Fils, Sauvignon Blanc, Sancerre, France A Pale lemon colored wine with a nose of tart green lime, lamb’s wool and gardenias. On the palate are flavors of wet stone, grass, dill, and tarragon, with a finish of grapefruit. 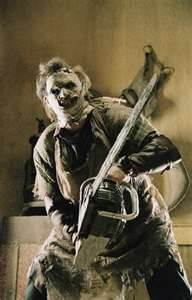 In 1974, Leatherface from The Texas Chainsaw Massacre, became the most famous dismemberer in the cannibal loving Sawyer family. Leatherface is known to dress himself in his victim’s skin and mutilates his victims with his skilled chain-sawing. The Texas Chainsaw Massacre is a movie that follows a group of friends who fall victim to the Sawyers while on their way to visit an old homestead. Instead they stumble upon the Sawyer household where we are introduced to Grandpa, Leatherface, Drayton, and The Hitchhiker. Since Leatherface loves human flesh and even turns it into his own clothes, his apparent love of leather would give him pleasure when sniffing the aroma of a good glass of Cabernet Sauvignon. 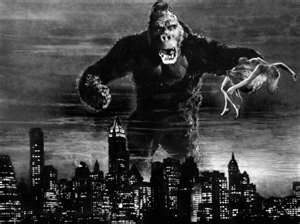 King Kong was conceived and created by U.S. filmmaker Merian C. Cooper in 1933. Living on the island of Skull, King Kong is captured by an American film crew led by Carl Denham who takes him to New York City to be exhibited as the “Eighth Wonder of the World”. Unfortunately, King Kong escapes and wreaks havoc on New York City. In one of the most famous movie scenes ever, he climbs the Empire State Building in an effort to save Ann Dowing who the great ape has fallen in love with, but he is ultimately killed by bi-planes and falls to his death. A dark and horrific love-story, this ape most likely loved two things: Ann Dowing and bananas. A nice Chardonnay after long night of escaping shackles and frightening people in New York City would most likely top it off.

Wine Pairing: 2009 Rombauer, Chardonnay, Napa Valley, California Big, full and buttery, the banana and tropical fruit notes can’t be missed in this Chardonnay. A finish of green melon and buttered toast on the nose.