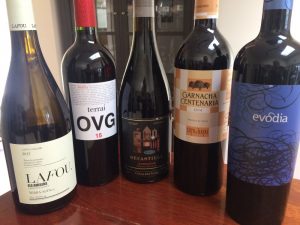 On September 16th, 2016, we are raising our wine glasses and rejoicing another great grape! The annual celebration is in honor of Garnacha wines from its original birthplace, Northeastern Spain.

Watch this interview with Alvaro Palacios to learn more about Garnacha

On the third Friday of September, fans of the Garnacha grape will once again raise their glass to this rising star in honor of #GarnachaDay, this year on September 16th, 2016. Garnacha, the only mainstream varietal with red and white variants, produces a great variety of wines, which speak loudly of their place of origin by clearly transcribing their respective terroirs.

I will be celebrating Garnacha Day on September 16th with these wines:

Also known by its French nom de vin, Grenache, Garnacha now reveals its best expression in its birthplace – the five Protected Designation of Origin (PDO) regions of Calatayud, Campo de Borja, Cariñena, Somontano and Terra Alta – where a new generation of winemakers has risen to offer improved ways of producing Garnacha-varietal wines. By controlling yields, taking advantage of old vines’ concentration, and combining modern techniques with ancient traditions, these regions have emancipated the grape from its common use in blends to show it can stand on its own.

With red and white, even sweet and rosé, Garnacha is capable of great diversity. What all these wines have in common, however, is excellent balance and an expressive nature that is the hallmark of Garnacha. Sometimes dubbed the most food-friendly grape in the world, pairing Garnacha is easy and full of possibilities. Here is a simple guide to get you started:

A light, crisp and mineral white Garnacha is characterized by flavors of apple, peach, lemon and quince, making it a great partner for summer salads or seafood dishes, including raw shellfish, paella, or pasta with clams. A plumper, richer and rounded style will display citrus oils, honey and melon, making it delicious alongside glazed ham, fried seafood or chicken, seared scallops, or melon and prosciutto.

A fuller-bodied Garnacha will show more robust and concentrated flavors, including those of blackberry, currant, allspice and tobacco. Pair it accordingly with foods that can stand up to its power; such as barbecued ribs, pulled pork, grilled sausages, or lamb chops.

Accessible, friendly and fun, Garnacha wines are a symbol of Spanish culture and are meant to be shared with others: discover tastings happening near you, by visiting www.winesofgarnacha.com, and show us which Garnacha wines you taste by using the hashtag #GarnachaDay across social media.

About Wines of Garnacha

Wines of Garnacha is the official campaign regrouping producers from Garnacha’s birthplace – the five Protected Designation of Origin (PDO) growing regions Calatayud, Campo de Borja, Cariñena, Somontano and Terra Alta – joined with the Spanish Ministry of Agriculture, Food and Environment and the European Union. Its primary mission is to promote Garnacha Wines in key export markets, by raising awareness of the grape’s origin and of the new production approach used to make mono-varietal wines.