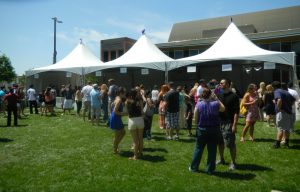 Downtown Livermore was bustling last weekend. One of the oldest wine growing regions in California, Livermore is not only a premier wine district with 4,000 acres planted under vine, it also hosts a hip downtown. The tree-lined downtown was home to the 21st annual Livermore Valley Wine Country Festival. Twenty-one local wineries, a handful of breweries, and three stages with live entertainment featuring bands like the Bacchus Brothers, a plethora of vendor’s tents, and rides for the kiddies all added up to a fun-filled weekend that gained a great deal of exposure for downtown Livermore. New this year was the “Gourmet Food Truck Alley” that featured many top notch food trucks from around the bay area. Trucks with names likes Seoul on Wheels, Rice Rockit and Eat le Truc, couldn’t go wrong with their groovy food. There was also a “party within a party” atmosphere where side streets hosted their own entertainment, food and vendors. “J Street Jam” had a full size pirate ship and pirate show to entertain the kids and “Kickin’ on K Street” hosted a hot dog eating contents sponsored by Spanky’s Dog House. The food and wine event was free to all, but if you wanted to sample the wines and beer, drink tickets could be purchased for a minimal price.


“Our ultimate goal is to gain exposure for our downtown businesses. Our downtown has something for everyone and…we make sure the festival does as well.” 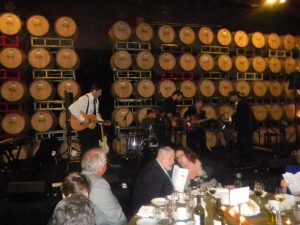 On Saturday night, the party shifted over to the Wente Family Vineyard Estate on Livermore’s winery row. In partnership with the Wente Family Foundation and the Livermore Valley Winegrowers Foundation, the 18th Annual Livermore Valley Wine Auction was held in the vast Wente Barrel Room. The wine auction featured 22 one-of-a-kind live auction lots, including winemaker’s dinners, winery tours and tasting, and suites to the A’s, Shark’s and 49’ers games. The evening began with a wine reception and silent auction. Guests were then escorted to their seats to enjoy a musical performance by Wolf Hamlin, American Idol contender, who played with The Front Porch featuring Karl Wente, winemakers of Wente Family Vineyards. The live auction kick-started into gear with the spirited auctioneer, Damon Casatico and his team. The first live lot off-the-block was a winemaker’s dinner at Castlewood Country Club featuring wines from Rodrigue Molyneaux sold to two parties with a combined bid of $4000! The highest lots of the night went to a 7 Day stay at a 6 bedroom estate at Donner Lake and a private winemaker’s dinner with Karl Wente and his band for over $8,000! The mission of both foundations was to raise funds to improve the quality of lives for under-served local children and to support arts education programs in the Livermore Valley and throughout the United States. The wine auction raised funds for Valley Care Foundation, Open Heart Kitchen, Bankhead Theater, and the Livermore Valley Education foundation. Initial estimates show charities will benefit from well over $200,000 in proceeds from the auction! 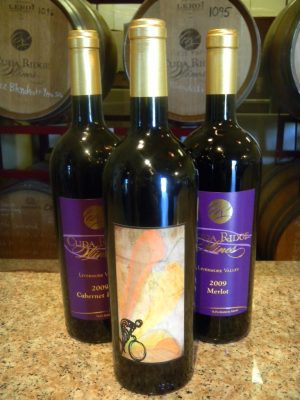 In two weeks, Livermore Wine Country will be hosting the Stage 3 finish for the 2012 AMGEN Tour of California. America’s most successful cycling race, the AMGEN is one of the nation’s largest and most recognized annual sporting events. Professional teams from around the world, will compete in an eight-day event that will crisscross the state of California. Stage 3 will begin in San Jose, cross through Livermore, head up to Mt. Diablo, then return and finish back in Livermore. After the race, cyclists and paid ticket holders will be treated to a VIP tent where local vintner, Larry Dino of Cuda Ridge Wines will be pouring his 2010 The Tour, a Bordeaux blend of 65% Cabernet Sauvignon, 30% Merlot, and 5% Cabernet Franc. Created for a second time to commemorate the AMGEN Livermore finish, the wine is sold only at the First Street Wine Company and Cuda Ridge Wines. The label, featuring an abstract drawing of a cyclist and the Stage 3 route was created by local artist Reina Hernandez. Run or cycle, but don’t walk to grab up this wine as sales are brisk at $29 a bottle. Expect a young wine that can be aged with crisp acidity and smooth tannins, hints of chocolate, oak, rich blackberry, and black currant on the nose, with white pepper on the mid-palate that slowly fades to a toasty coconut.

“Last year was the first year that we produced The Tour. We produced 24 cases. We were sold out well before the race so we decided to increase the production this year to 72 cases. We are well on our way to sell out this year with almost half sold and the race hasn’t even begun!”