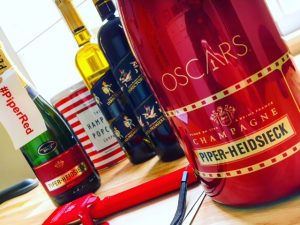 I’m going to go out on a limb and guess the closest any of us will ever come to going to the Oscars is pulling up a front row seat in our living room (with or without a screaming baby in the background). However, I am here to say there is hope for us starstruck, yet stardom deprived award show attendee wannabees. While you will never go to the Academy Awards, and you will most certainly never take home an actual Oscar, you absolutely CAN drink like the stars at the Oscars, the world’s most sought after acting award. Hashtag: I’ll have what she’s having 😉 Without further ado, here are the Oscar Worthy Wines. 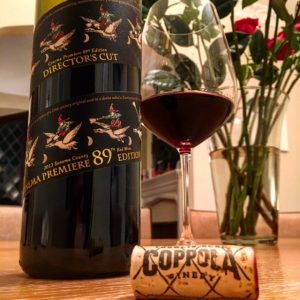 Piper-Heidsieck and Francis Ford Coppola Winery will be the sole champagne and wine brands poured at this year’s Academy Awards and Governors Ball. What does that mean to you? Well, it means that you can go to the store and pick up a bottle and drink the EXACT same wine as Ryan Gosling and Emma Stone. With a little movie magic and a lot of glasses of wine you (and by you I mean me) can go from sleep deprived, twin mom, in sweatpants, to a vivacious starlet tap dancing with Mr. Gosling in the Hollywood Hills.

Our friends at the Healdsburg based Francis Ford Coppola Winery are the official wine sponsor for the Academy Awards and the post-Oscars Governors Ball for the next three years! So now, all you have to do is pop the cork, pour a glass, and you too can sip like a celebrity. Francis Ford Coppola Winery created two specialty wines, the Director’s Cut Russian River Valley chardonnay and Sonoma County red. Coppola and winemaker Corey Beck designed custom wine blends and commemorative labels for the special occasion, which will be poured exclusively for the nominees and guests in the lobby bars and at the dinner.

“Filmmaking and winemaking are certainly two great passions of mine. I am now able to blend the two together in a big way.” – Francis Ford Coppola 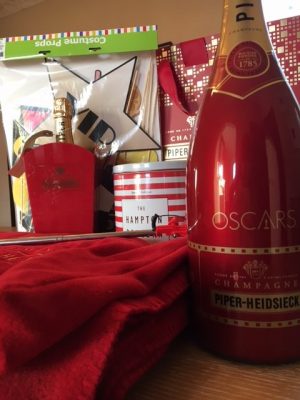 The 2017 Academy Awards season marks the third year of a long-term partnership between Piper-Heidsieck and the Academy of Motion Picture Arts and Sciences. To mark the occasion, Piper-Heidsieck has created a limited-edition magnum bottle (pictured to the right) to be poured exclusively at the ceremony and the Governors Ball, the official Oscars after-party for the Academy.

Described as “an exceptional bottle for an exceptional night, the Piper-Heidsieck Cuvée Brut magnum is colored red and features a design of gold film around the bottle.

The Champagne house has a just claim to have been supporting cinema since 1933, when a bottle of Piper-Heidsieck appeared in Sons of the Desert, the debut film of Laurel and Hardy.

“Piper-Heidsieck has a long and rich association with cinema and is proud to return to the Oscars, the ultimate arbiter of cinematic achievement in film. On behalf of Piper-Heidsieck, I want to congratulate all the nominees for this great recognition by the Academy of Motion Picture Arts and Sciences.” – Benoit Collard, global executive director of Champagne Piper-Heidsieck

The 89th annual Academy Awards take place this Sunday, 26 February at the Dolby Theatre at the Hollywood and Highland Center in Los Angeles.