In order to fully understand what makes Prosecco Superiore so superior, we travel to Northern Italy and visit the heartland where the most prestigious Prosecco on the planet is produced: Conegliano Valdobbiadene. 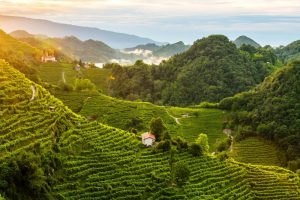 Conegliano Valdobbiadene the Birthplace of the Best Prosecco: a small zone in Veneto, between the magical mysteries of Venice and the magnificent Dolomites mountain range.

It’s no secret that American’s are Prosecco obsessed! Perhaps, being fun to say and easy to drink, helped fuel our love affair with the Italian sparkling wine. While that might be what got the trend started (the 2008 recession helped as it’s an affordable alternative to the other sparking wines out there) it isn’t what kept it going. For any real love affair to last there most be something else there, something real that runs deeper than a quick fix.

Yes, Prosecco is a fun wine but it’s also a wine to be taken seriously. The key to understanding America’s favorite Italian sparkling wine starts with history, culture, and quality. The wines are as complex as the rules regulating the region.

This is the first of a five part series where we will help you navigate the world of Prosecco like a pro. Our first two episodes are dedicated entirely to Conegliano Valdobbiadene Prosecco Superiore D.O.C.G. 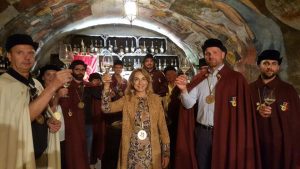 Watch as Italian insider, Natalia Ravidà takes us on a ride of a lifetime. First things first, we get to the bottom of Prosecco and explain the quality distinctions so they are easy to understand. Then, we go inside Italy’s first wine school and hit the highway along Italy’s first wine road, The Prosecco Route.

A scenic drive that intersects the beauty and culture of the entire region. While the diversity of the landscape can’t be escaped, the common thread is the countryside surrounded by vineyards and villages. Then we get knighted into a secret society that celebrates Valdobbiadene.

A few things to keep in mind and soon you will be speaking about Prosecco like a Top Somm.