Pigging Out On A Plethora Of Pinot Noirs

Even the most closeted of bacon lovers were smiling with sheer, glistening-cheeked delight on Friday evening, March 23, 2013, at the Hotel Healdsburg, for Charlie Palmer’s 8th annual pork-based phantasmagoria, Pigs & Pinot. A benefit for Share Our Strength, the leading national organization working to end childhood hunger in America, Pigs & Pinot also supports local culinary and wine scholarships. With 60 Pinots to explore, and dishes from 20 local chefs and caterers, this legendary event transformed the laconic grounds of the Healdsburg Hotel into a porcine palace of epicurean opulence. Vegetarians need not apply. 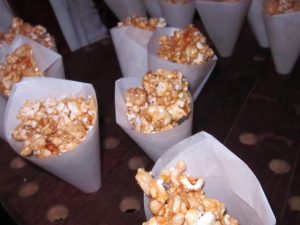 The only thing green at this event was the grass. Dishes, prepared by celebrity chefs like Delfina’s Craig Stoll, Spoonbar’s chef Louis Maldonado, Dean Fearing, Iron Chef America Jose Garces, of Garces Group (PA), and Krescendo’s Elizabeth Falkner from Brooklyn, New York, ranged from simple bacon-laced clam chowder, to ornately presented cassoulet. There were pork-laden street tacos, po’ boys, Bahn Mi, pizzas and sandwiches, followed by brownies, s’mores, popcorn, truffles and biscotti, all packed with that most tantalizing of foodstuffs, bacon. I’m sure there was bacon-flavored coffee, too, but there is a limit to how far I will push the pig. 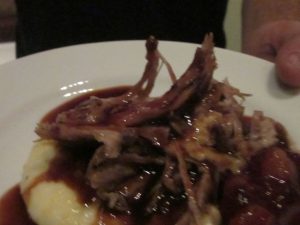 Pork in its purest form took the main stage, with some of the highlights being the Baci Café & Wine Bar’s succulent slow roasted white marbled pork served on creamy polenta with an exceedingly rich Pinot cherry reduction. Forkful after forkful went sinfully well with the gloriously velvety and immaculately structured 2010 La Rochelle Soberanes Vineyard Pinot Noir from the Santa Lucia Highlands. (Soberanes is another one of Gary Franscioni’s and Gary Pisoni’s collaborative efforts.) Then, there were Bistro Ralph’s exquisitely seasoned baby back ribs, laced with cardamom, paprika, cayenne, ginger and a lemony glaze that made the 2011 Failla, one of the few Russian River Pinots that nailed the cool essence of the vintage, positively sing. 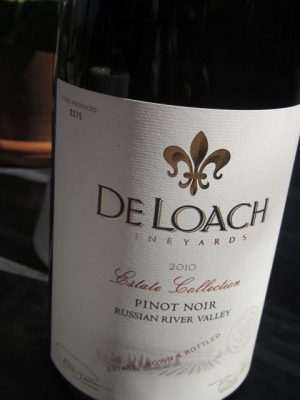 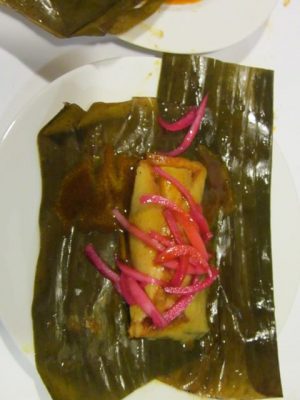 Smooth operators tend to gravitate to one another. The suave and sophisticated 2010 DeLoach Estate Pinot Noir, the first vintage from their biodynamically farmed vineyard, handsomely escorted the one-bite quail egg, prosciutto and cilantro BLT on brioche from Barndiva, down the hatch. This wine has all the seamlessly flowing precision of a veteran Tai Chi instructor.

Then, there was the spirited, highflying songbird, the 2010 Cartography Pinot Noir from the Perli Vineyard on Mendocino Ridge, an exceedingly difficult place to ripen Pinot. However, when it’s good, it is truly awesome. This vintage plants one powerful punch in the olfactory, with its scents of orange and mandarin peel, followed by red currants and raspberries on the palate. It was pure joy with Mateo’s Cocina Latina pork belly tamale with cinnamon-clove cured onions, served in a banana leaf. Chef Mateo Granados did himself proud with this one. Fabulous flavors! 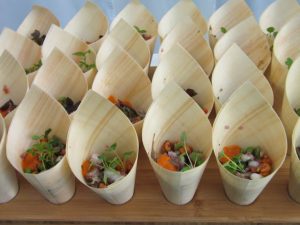 One of the healthiest dishes of the evening was Chef Jose Garcas’ Ecuadorean Fritada de Puerco, a warm hominy salad with fried pork, saucy cilantro, lime and ají costeño, a spicy sauce made of peppers, tomatoes, cilantro and onion. Amazingly simple, yet deliciously complex, this dish was further enlivened by the splendid 2006 Harmonique “Delicace,” a swan-graceful wine made by Anderson Valley legend, Bob Klindt. This wine showed beautiful nuances of bottle age, with a rosey perfume, touch of citrus and a well-integrated yet graceful acidity, born to complement spicy foods.

The Harmonique was among the top five wines I tasted all evening, the others being the 2010 De Loach Vineyards Estate, the 2010 La Rochelle Soberanes, the 2010 Cartography and the 2011 Failla Pinot Noir. To make up for the healthy diversion, I plunged one of Chef Mike Matson of Vintage Valley Catering’s pork belly with arugula almond pesto, table grape and pork cracklings down the hopper. Except for nearly choking on the grape – I’m not used to consuming wine in pill format – it was divine on every level, made even better by a hedonistic chaser of 2011 Holdredge “Rolling Thunder” Pinot Noir from Russian River, equipped with good acid and a texture to match that of the dish. MMMM, double good!

Now it was time to try Chef Elizabeth Faulkner’s Pork Belly Confit on Averna Caponato & Pork Biscuit. Hmmm, somewhat straightforward, but nice with the 2010 J Vineyards offering, a fairly mono-focused wine, a bit like a slim, young princess who has yet to blossom.

Then, it was to Chef Jeff Mall of Zin Restaurant, for his honey-cured heritage pork served with Indian blood peach mustard, a divine bite with the 2010 Papapietro-Perry Pinot Noir from Campbell Ranch on Sonoma Coast. Its gutsy, chewy core was a perfect foil for the spicy mustard.

A nibble of Chef Charlie Palmer and Chef Seakyeong Kim’s offering, Korean baby back ribs with kim chee and jujube chestnut puree, was spicy nice with a sip of the 2010 Native 9 from Santa Maria Valley. In a show of restraint, I breezed past Spoonbar & Pizzanda’s sumptuous looking pork-packed Bahn Mi buns, prepared by Chef Louis Maldonado. One bite of Chef Dean Fearing’s smoky street taco with charred corn was all I could manage, but it sure went well the crazy smoky over-oaked Pinots that were in abundance.

I passed up Chef Craig Stoll’s Delfina Mortadella di Prato & Sportivi on Pizza Bianca, as the portions were gargantuan. Why eat bread when you can pack an entire pizza’s worth of calories into a single bite? Seriously, the servers came around with Dustin Valette’s Crispy Pork Belly Lollipops: pure, drippingly unctuous skewers that directly injected an entire layer of lard into your arteries. Really, you should only eat just one, but like Lay’s potato chips, there’s absolutely zero chance of that. Ok, just one more. I think that’s what did me in. I was officially in whatever stage comes after Hog Heaven.

Should you be pondering attendance at this event next year, be poised to buy tickets as soon as they go on sale in January, as it will, indeed sell out immediately. And, you would be well-served to follow this pre-Pigs & Pinot regimen.

And, don’t eat bacon for breakfast the next day. It just won’t taste the same without Pinot.