2014 marks the 40th anniversary of one of the premiere wine labels from the Central Coast, J. Lohr Vineyards & Wines, named for Jerry Lohr, pioneer in planting vineyards in both Monterey and in Paso Robles.

The Rhone tale begins in the late 1980s, when Lohr saw Paso Robles pioneer, Gary Eberle, having success with Syrah. Lohr planted some as well, producing the first South Ridge Syrah vintage in 1993. Rich, pliant and easy to love, it has become one of the winery’s most popular wines. Yes, wine drinkers do love Syrah.

Don’t let anyone stop you from buying and drinking Syrah. More people love it than you think. It’s the dirty little secret of wine lovers. Because it’s been en vogue to worship Pinot for the last decade, some folks might have suppressed their inner desire for Syrah, that most sultry, tempestuous and moody of varieties that, like Pinot Noir, creates its own flavor choreography depending on where it’s planted. Time to give Syrah, and all its Rhone sisters and brothers, a proper place in your heart and wine cellar.

A Gesture of Thanks, An Ode to Rhone 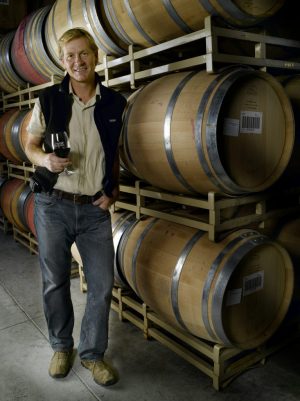 Beginning with the 2007 vintage, J. Lohr began the “Gesture” line, a way of thanking their best customers with limited-production wines of high quality and concentration. I’ll never forget the first time Steve Lohr poured me one of the very first Gesture GSMs at a Hospice du Rhone in Paso Robles. It was an arresting sip of wine that made me totally rethink J.Lohr. This Gesture series is a thing apart.

Longtime director of winemaking, Jeff Meier, whose likeness graces one of the enormous Monterey Wine Country billboard cutouts along the highway 101 corridor through Soledad, describes this series as a winemaker’s playground, saying, “Gesture gives us a venue to work in very small lots and explore our fascination with Rhone grapes.”

We’re glad that Meier and Red Winemaker, Steve Peck, teamed up to flesh out such a worthy collection of Rhones. Steve Peck’s tenure in the wine industry goes back to the early ‘80s at Joseph Phelps, where he worked with Syrah. Later, when at Five Rivers, he worked alongside Pebble Smith of James Berry Vineyard, a renowned Syrah producer.

Pretty much all the Gesture wines come from hillside vineyards rich in limestone soils in the south and western areas of Paso Robles.

The Wines, The Truth

No question about it, there are different strokes for different folks, and nothing could be more obvious than this wine lineup. There’s South Ridge Syrah at the lower end of the spectrum, sweeter, more fruit forward, with flute and violin notes. Then there’s the “Gesture” Syrah, with a deeper voice, more like clarinet and viola. It depends on your mood.

Invites you in with pleasing red plum and white pepper notes, then delivers a nice experience of red grapes roasted in blackberry ginger balsamic, along with spunky RC cola, black tea and roasted coconut. Easy to drink, and perfectly swell with grilled pepper cheese and ham and mustard on sourdough. If you’re looking for an every day Syrah, this is a good candidate.

Aromas of graphite, cola, earth and grilled fennel, with flavors of Damson plum tart, chorizo, blackened chiles and pork roasted with chile negro. Hailing from the 1800 ft. Terra Bella Vineyard in the Adelaida district of Paso, this is a complex, tightly wound wine that is not exactly ready to party. But with some aeration or some bottle ageing, this will be quite worth spending an evening with, and you’ll see the benefit.

It’s hard for me to resist a Mourvedre. There is something so seductive and inherently wild about it. If Syrah is a feral housecat with a bad attitude towards parakeets, Mourvedre is a stealthy bobcat on the prowl for some seriously juicy backyard chickens. This wine tempts with aromas of red plums, juicy blackberries, basil, smoked meat and a smidgeon of pepper. The flavors are explosively red, black and blue, all savory-edged and precise with a persistence and presence of a wild animal. This wine will haunt you.

From the Gean Vineyard in western Paso Robles, one of J. Lohr’s newest vineyards, planted in 2010, comes richness in spades. True to the varietal, its aromas tend toward the floral, dominated by lychee, honeysuckle, star jasmine and pear blossom, with apricots drying in a warm summer sun. Rich, almost opulent in the mouth, the tropical fruits and pear butter flavors are further amped by ripe apricot and custard. It has 6% Roussanne and 1% Grenache Blanc for depth. It would be awesome with curry or any spicy Indian food.

Ah, the nose on this one is like a tropical summer garden, overflowing jasmine, lotus blossom, groves of blooming orange trees and a touch of gardenia. It’s indeed a tropical medley on the palate, with guava, papaya, kiwi, mango and just a touch of lychee. No wonder it’s rich, with Roussanne, Viognier and Grenache Blanc, all pretty robust glamour queens on their own. Sans the bananas, this is Carmen Miranda’s crazy fruit-laden bonnet of yesteryear. Close your eyes and you are in the tropics.

Lively, full throttle, exciting and vibrant, this is a rosé that you can’t ignore. Made from 96% Grenache, 2% Syrah, 1% Mourvedre and 1% Grenache Blanc, it was stainless steel fermented and did not go through malo. This is a rosé on purpose: not a saignée. Aromatics of lilacs, bubblegum and crisp pear dive in and mingle with flavors of fresh strawberries, pink lemonade and white currant. Lean and beautiful, this is a lovely gesture in the glass.