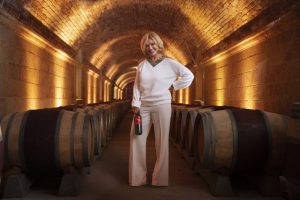 In this episode of Wine Oh TV, Monique Soltani goes behind the bottle (and the bunny ;)) with Napa Valley’s Queen of Cab, Kathryn Hall.

Watch and discover how being a United States Ambassador to Austria changed her palate (but not her politics).

How being a farmer’s daughter, drew her into the wine biz, and eventually led her to discover the Sacrashe Vineyard.

With wine in her genetic make up, this second generation vintner’s roots run deep in California wine country. Kathryn learned how to farm grapes at an early age from her father, Bob Walt, who instilled in her a philosophy that cutting corners is not an option, and that following environmentally sustainable practices was the right thing to do.

“I have always valued attention to detail and I am passionate about enabling healthy, creative living and working environments.

I do my best to never cut corners in my work or in my home life, and to live as responsibly as possible. I think each of us can make a difference in this world.” – Vintner Kathryn Hall 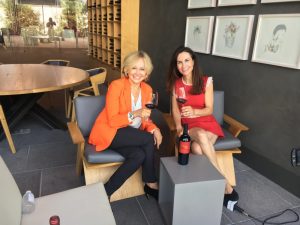 Tune in as we taste the 2015 Kathryn Hall Cabernet Sauvignon, 24 years after the wines first release.

The wine has been recognized by the Wine Spectator’s Top 100 list twice and the 2008 Kathryn Hall Cabernet Sauvignon earned the #2 spot in 2011.

Kathryn Hall is a New York Times Bestselling author of; “A Perfect Score.” Named after a perfect score Robert Parker gave her 2010 Excellenz in 2013.

ABOUT HALL: The Art of Cabernet

Kathryn’s philanthropic efforts throughout Napa and Sonoma Counties have helped raise over $8 million dollars for non-profits in education, health, science, technology and animal organizations within Napa Valley. Along with her husband, Craig Hall, her commitment to the community has been a central part of her focus in Napa Valley since the early 1990’s. Together, Craig and Kathryn have four children, one of whom, Jennifer Brown, is active in the family-owned winery. More information on the family’s community efforts is available at www.hallwines.com/wecare.