There are 10 main wine producing regions in France. The most famous of course are Bordeaux, Burgundy and Champagne. Loire Valley wine might not be as well known but the heart of France is holding its own.

The Loire Valley is the most massive and most diverse wine producing region in France. The Loire Valley can be broken up into four wine-growing regions: Nantes (Muscadet), Anjou and Saumur (Sparkling and Chenin Blanc), Touraine (Vouvray) and Centre-Loire (Sancerre and Poully -Fume). 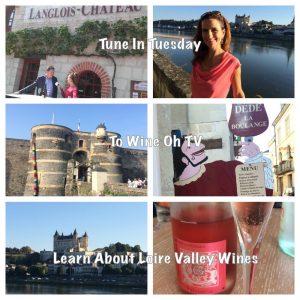 In this video, Wine Oh TV’s Monique Soltani shows us how Loire Valley’s fresh, affordable, and food friendly wines hold court in the Valley of Kings.

The Duke of Blacas shows us his digs and explains how his Chateau d’ Usse inspired the Sleeping Beauty fairytale and Walt Disney.

In the second video, we learn about the wines of Loire Valley’s Anjou and Saumur. In the third and final video we will look closely at Vouvray and Chinon. 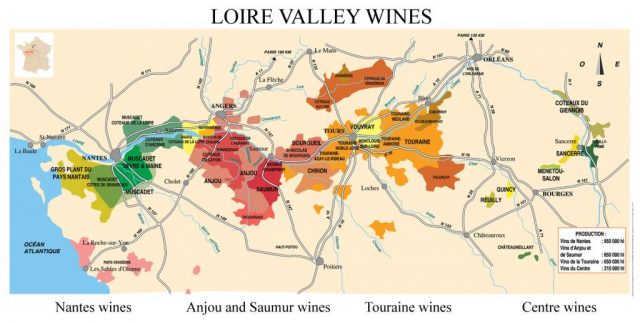 The Upper Loire Sancerre and Pouilly-Fumé where Sauvignon blanc and Pinot noir dominate.

The Middle Loire regions include Touraine, Saumur, Chinon and Vouvray and the main wine grapes are Chenin blanc,  Cabernet franc and Gamay.

The Lower Loire Muscadet region is at the mouth of the Loire River and at the entrance to the Atlantic. The Melon de Bourgogne grape prevails. 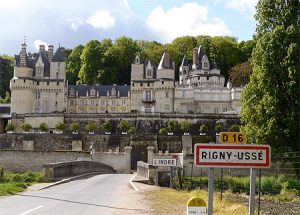 The castle is located near the towns of Chinon and Azay le Rideau and overlooks the Indre River.

The castle has a staging of the famous Sleeping Beauty fairy tale and exhibition of period costumes that depicts castle life. 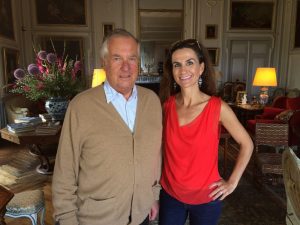 Ussé was the subject of a French railroad poster issued by the Chemin de Fer de Paris à Orléans in the 1920s and was one of several that inspired Walt Disney in the creation of many of the Disney Castles.

During World War II, Ussé was occupied by the Nazis.

Ussé was built on the foundation of an 11th century fortress.

Ussé  is open to the public from mid-February to mid-November, all day long.

Monique Soltani: Here in the heart of France, Loire Valley is famous for its fairy-tale facade, enchanted vineyards, and spectacular Château.

Casimir de Blacas: This is 11th century. In those days, people were a lot smaller than they are today. If I stand up right, I will bang my head on the ceiling which certainly was not the case at the time.

Monique Soltani: When you were a kid, did you come down here to hide when you were in trouble?

Casimir de Blacas: Oh, yeah, we hid in many places.

Monique Soltani: For the seventh Duke of Blacas, the past is ever present. We are in your magnificent wine cellar here.

Casimir de Blacas: This is a Château Haut-Brion, I think, 1918. Quite a lot of the bottles were drunk by the Germans, but still just behind you, there is a little vault where about 50, 60 bottles are still pre-first world war. We are the last big, big Loire Valley Château privately owned and inhabited. The Duke is a title which was bestowed on my ancestor in 1810 by King Louis XVIII. My ancestor was a faithful of King Louis XVIII.

Monique Soltani: Fairy-tales are for real here in the Loire Valley and their storybook villages have been inspiring for centuries.

Casimir de Blacas: In the 17th-century they had a lot of writers, and authors and artists came to the Château. Amongst them was Charles Perrault and in letters he wrote, he tells about his stay in Ussé and he thought this was a fantastic place to affix the scenery of the Sleeping Beauty. He wrote the book in Ussé and Ussé is the Sleeping Beauty Castle.

Monique Soltani: And what happened when you went to Disneyland?

Casimir de Blacas: I said, “Hey, where am I? Am I at Ussé in my Castle or am I in America?”

Casimir de Blacas: My Château inspired Walt Disney, not the other way around.

Monique Soltani: Château Ussé, a.k.a. the Sleeping Beauty Castle, is one of more than 1000 Châteaux that put parts of the Loire on the world heritage site map back in 2000.

Juliette Monmousseau: We are in the heritage place where just one of the pieces of the history of Loire which started centuries ago and it’s the Valley of the Kings. That’s where the Kings would have their homes. Loire was also the highway to travel goods, so very essential element at the time being, because it was the only way you could travel goods in quite relatively fast way.

Monique Soltani: The Loire has been called the Valley of Kings and the Garden of France, but no matter what you call it, it’s still the country’s third largest wine-making area. The story here that’s rarely told is perhaps the fairest of them all. We’re here in the Loire Valley, France’s largest white wine district. The Loire Valley is France’s most diverse wine region. The main grapes here are Sauvignon and Chenin blanc. With 79 appellation and 4 sub-region lining the river, the Loire Valley is a massive wine-making region spanning from Sancerre and Pouilly-Fumé in the upper Loire to Muscadet near Nante with Anjou, Saumur, Chinon and Vouvray all in between.

Juliette Monmousseau: It offers a lot of different styles and this is our richness, but it’s also very scattered along a long river and a long wine region in a very wide wine region. So it’s really difficult to come with an image as a whole, because the richness is that it’s multiple. So this is why I love it and this is why only in our region, it’s an endless discovery

Monique Soltani: The hidden treasure in the land of castles, uncovering an unknown wine region, that’s just as noble.

Patrick Baudouin translated by Céline Fleury: Well, just between the León River and the Loire River, the first thing is we make a unique wine, it’s a terroir. The most well-known fact is in Burgundy. We are less known for the Burgundy but we work in this field. We think we have the good terroir to have something unique for its plot. We have the chance to be recognized, but we are underestimated because there is this sweet vineyard, both the Burgundy and Champagne.

Monique Soltani: It makes no difference who you are here in the Loire, where dreams can come true.

Monique Soltani: And happily ever after happens every day….Wow.

Thank you to Loire Valley Wines for sponsoring and organizing this trip and making it possible for me to share what I learned with all of you!