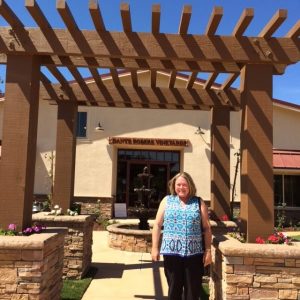 For once, I veered away from the crowded centers of communal conviviality, and visited some of the “farther out” wineries in the region for this annual harvest ritual in the Livermore Valley.

First stop was brand new Dante Robere, on Wetmore. It’s a paragon of relaxation, with shaded patios both front and back, a welcoming fountain, and a beautifully finished tasting bar. This is a reservoir of reds, so if you are a white wine drinker, you’d best make other plans.

Lovers of robust reds and blends, though, will be pretty stoked, especially by the 2012 Reserve Syrah ($36), (named “Best Syrah” at the 2015 Uncorked! Competition), and the “Two Cellar Rats,” ($25) named for the owners’ sons. This cellar blend of Syrah, Mourvedre, Zin and a dosage of Albarino (we’re not sure what happened to the rest of that lot, but my guess is it became cellar koolaid), is really easy to drink: simple and sweet. I call it a “puppy dog” wine. 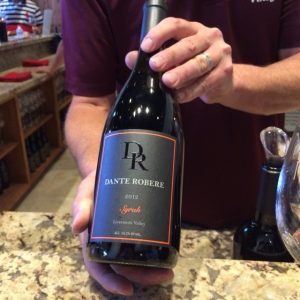 The “Roberitage,” a blend of Cabernet and Estate Syrah ($34), is soft and easy, like a summer beach novel, and the 2013 Mourvedre ($31), could dress up as Pinot Noir at Halloween, with its pretty raspberry and red plum finesse and its finish of cranberry-orange.

My favorite of the lineup was the 2012 Cabernet Sauvignon ($38), which pairs the slightly herbal tones of Bodegas Aguirre Cabernet with the cherry tobacco silkiness of Blanche’s Vineyard Cabernet to create a lovely, ageworthy wine. Notably, the Blanche’s Cab vines were subsequently ripped out, so this is truly a unique, end-of-the-line wine. 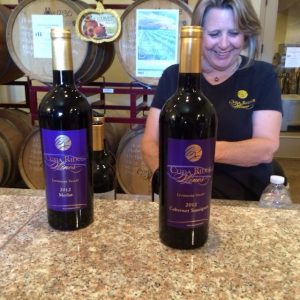 Then it was on to Cuda Ridge, a Bordeaux house, where the 2013 Petit Verdot ($36) proved itself an outstanding example of everything this grape can be: a midnight blue-black horse of licorice, juniper, tar and dark chocolate cupcakes filled with black raspberry jam. This is one stunning wine.

Winemaker Larry Dino has also found the sweet spot with the 2012 Merlot ($27), and I’d urge you to take a swig from the cup of one of the top-selling red wines in the world. Yes, Merlot. It’s got game, from the appealing and chocolate fudge and ganache-laden nose, to the pulsing electricity of its multi-pronged attack on the palate. This wine from Rhonda Wood’s Crane Ridge vineyard, makes sure you pay it proper attention: it’s not for swilling. One of the best Merlots on offer in Livermore right now, along with examples from Occasio and Caddis, you should make it a point to buy some to celebrate “Merlot Month” in October (see LVwine.org).

But don’t leave Cuda Ridge without trying the newly released and completely fabulous 2012 Cabernet Sauvignon ($38), which pretty much knocked my socks, er sandals, off, with its hedonistically powerful aromas of cherry tobacco, blackberry pie and vanilla fudge. On the palate, it’s cherries jubilee with chocolate fudge and walnut brownies, exhibiting plush, velvety, eternally smooth tannins amped up by 30 months in new French. It finishes long and lush, with toasty espresso. This is a seriously beautiful wine, drinkable right out of the gate, and ready to lay down for many years. 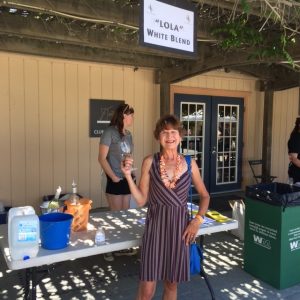 Speaking of wines built for the long haul, we next visited Steven Kent Winery, primarily to hear the Bacchus Brothers and to sample the Lola, a sassy blend of Sauvignon Blanc and Semillon, which is always one of my faves on a hot day. We were delighted to check out the new 2012 Cabernet ($48), which was phenomenal: smooth, robust, tinged with coffee. The newly released Lot 029 Red Blend ($36), is a strident, well-muscled and lean Bordeaux beast, with the surly lip and nervous energy of Sean Penn in a bad boy role. It combines Cabernet Sauvignon, Malbec, Merlot and Cab Franc, and punches your taste buds square on center with its dynamic red and black fruits, and fancy footwork. At 12.9%, this is exactly the kind of wine you want to let snooze for a decade in your cellar. I asked both Steven Mirassou and Jennifer Fazio about the origin of the name: their stories didn’t match, but it matters not: it’s a good a name as any! 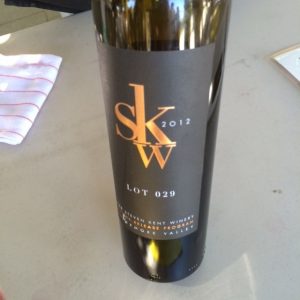 Steven Mirassou poured me a taste from a secret bottle of 1997 SKW Cabernet he’d discovered while making a recent sales call on a wine shop in Burlingame. While presenting the current vintage, the owner excused himself and came back with a bottle of the 1997. Steven tried to buy it all back on the spot, and no wonder: this is amazing stuff. The tertiary aromas of 18 years of development have done it proud, and you’d never guess its age from the flavors, which are still vibrant, racy and filled with lively spark, owing to its modest 13.7% alcohol. Steven says it’s available at The Wine Stop for $48/bottle, if he doesn’t buy it all first. Hurry!

As usual, a significant crowd had gathered at Crane Ridge to visit Rhonda Wood and friends, along with winemaker Chris Sorenson and family at Caddis. The Merlot still hanging on the vines looked like a pretty light crop. Fortunately, for Merlot lovers, and I’ll put myself firmly in that camp, the just-released 2013 Merlot ($38) is simply awesome. Everything you love about Right Bank wine: this is plush, but firm, like sitting on the front seat of a new BMW – just enough give, but no flabby marshmallow stuffing. 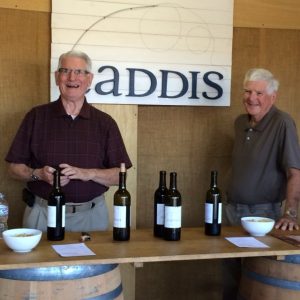 The just-released 2013 Cabernet ($45) is equally charming with its broader, fleshier tannin profile. The “Better Together” Cab-Syrah blend ($38) is big, bodacious and easy to like, while the 2012 Tempranillo ($38) stops you dead in your tracks with its monstrous tarry-edged plum tart flavors and smokey dark olive-infused tannins.

Chris and his wife, Courtney, are full-time Sonoma county residents now, having recently purchased a home for their newly expanded family. He works full time as Cellar Master at Kunde Winery in Kenwood, but his first love is Livermore. Caddis will remain at Crane Ridge: they are still accepting wine club memberships.