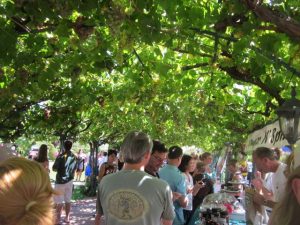 Originally meant as a way to bring the public to the handful of wineries that existed in Livermore 33 years ago, the annual Livermore Harvest Wine Festival has undergone changes almost yearly. For 2014, it was reduced to a single day, and the buses were eliminated. This certainly reduced the giant hordes of people walking along Tesla, and there were significantly fewer groups of obvious overindulgers. The crowd was noticeably more mature, with the majority showing an interest in Livermore Valley wine. Many wineries also honored event glasses and wristbands on Labor Day Monday. 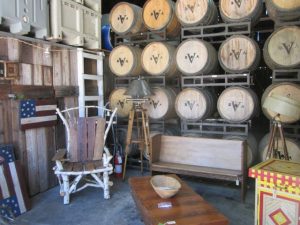 Each of the more than 30 venues participating had somewhere between one and three wines available as part of the event ticket: most had additional wines you could pay a fee to taste, and most had food vendors with items available to sample or purchase. Many visitors were electing to pay the upcharge to taste additional wines.

At Bent Creek Winery, I overheard one woman at the tasting bar next to me saying to her friends outside, “Come on inside and pay the fee: these wines are actually really good!” She was oh, so right. 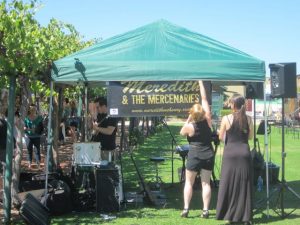 Concannon Vineyards, like Wente, always hosts wineries that are either off the beaten path or cannot handle crowds. McGrail Vineyards chose to pour here this year, and the 2008 Picazo Merlot was a showstopper, with its smooth rich tannin and decadent depth: it was awesome with the chocolately treats being sampled by Toucan Truffles. Music by Meredith & The Mercenaries, food trucks and vendors like Silpada and Purse Party, made it a great place to dwell.

Bodegas Aguirre was pouring a righteous 2011 Estate Merlot showing pure, satiny tannins, wound tightly around savory plum and raspberry chocolate coulis. Their 2011 Cabernet Franc was definitely one of the best wines of the entire day: true to the varietal, perfumey, with roses, lilacs and raspberry, and creamy texture. 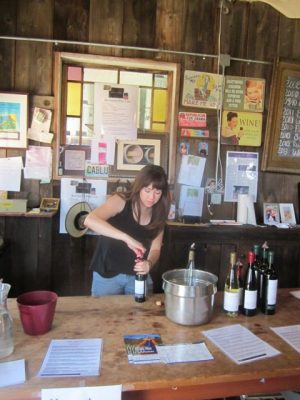 Boa Ventura de Caires has one of the most family friendly and countryside adorable settings, complete with barn and farm animals. Their selection of vendors was first rate, including the woodcraft of Larry Berger of Into the Woods Studio, whose furniture fashioned from antiques included a the coat hanger fashioned from croquet mallets and a tea cart inlaid with old rulers imprinted with advertising slogans.

CURE’s line of skincare products that benefit charitable causes is worth looking into for their PABA-free lotions with fabulous fragrances like Cranberry Spice (perfect for the holidays) and decadent scrubs: loved the lime ginger.

Charles R’s Dick and Bonnie Bartlett are among the most delightful on Greenville Road. Kudos to their impressive, well-integrated and on its way to classic 2008 Walker Ranch Cabernet and the 2009 Zinfandel, about as pretty a Zin as you’ll ever find from Livermore: balanced, sure-footed and just a hint of pepper.

At Bent Creek, the vibe was mellow, with acoustic tunes by local favorite, Vinny Berry, who has an amazing voice. His rendition of Roy Orbison’s “Pretty Woman,” was dead on. The wines are showing beautifully here, including the new 2010 Zinfandel, grafted from cuttings off the former Beyer Ranch. Scarlet in color and flavor, it tastes as red as it looks, brimming with pert cherry candy and cloves.

My friend Julie, a diehard Petite Sirah lover, was bewitched by the 2010 Bent Creek Petite, a Double Gold winner at the SF Chron Competition. This is one of the best Pets out there right now, perfectly integrated and beginning to show its velvety cloak of midnight blueberry pie.

After enjoying a taste of the smoky and plummy 2009 Estate Bent Creek Syrah, we were invited to snag a few ripening Syrah grapes from the well-endowed vines. The seeds were browning up nicely, and they tasted delicious, like almost ripe plums with a kiss of spice. They’ll be harvesting soon.

Newcomer Caddis poured their 2010 “Better Together” Cab-Syrah blend, named for the synergy between owners and newlyweds, Chris and Courtney Sorensen. These two varietals make great bottlemates. The 2011 Caddis Cabernet is gorgeous with black cherry promise. 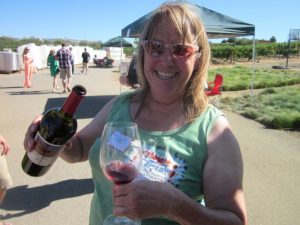 If you haven’t met Rhonda Wood of Wood Family Vineyards, you have to visit to witness firsthand why her slogan is: “It’s All Good at Wood.” Hint: it’s not just because she likes a healthy of oak in her wines. Each of the many folks who assists her with the festival wears a name tag depicting a type of wood.

Hence, the young man who greeted us was “Ply,” while “Holly” and “Drift” poured 2013 Chardonnay and “Apple” and “Red” poured 2008 Estate Merlot. Rhonda herself has a tag that reads “The,” which suits her just fine. My favorite was the 2011 Thomson Ranch Cabernet, straightforwardly fruity in the nose, but exhibiting the restraint of a well-bred trail horse. It was being poured by “Hard,” as opposed to “Incredibly Hard.”

Here, the Woods make merry in more ways than meets the wine.

Learn About Livermore Valley Wine Country by watching this video with the Wine Legends of Livermore: wineoh.tv/livermore-valley-wine-tours-wine-tasting-video