Looking Beyond the Label: A Sit Down with Sequoia Grove’s Molly Hill 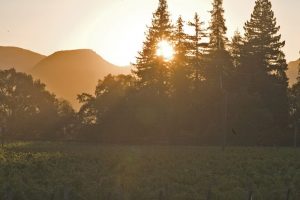 Looking Beyond the Label: A Sit Down with Sequoia Grove’s Molly Hill By: Laura Ness


It’s long been said that shoppers choose wines primarily by label. Sometimes it’s the color scheme or imagery that paints a mood. The simplicity or ornateness of the typeface can signify down-home casual or upscale elegance. There’s a lot that can be conveyed in a label, especially if it forges an emotional connection. Brand relationships can begin building long before the actual wine comes into play. 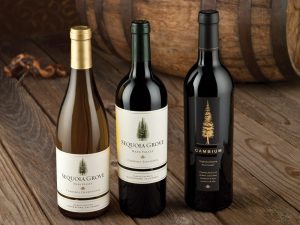 Such is the case for me with Sequoia Grove. It happens to be one of the first brands that resonated with me when I moved from Boston to the Central Coast of California in the early 1980s. Living in the redwoods of Boulder Creek, I became aware of just how these big trees dominate their surroundings. I grew to love them, not just as symbols of eternity and patience, but as pillars of the environment. Like Thoreau, Muir, Adams and Leopold, I consider them symbolic spirits: emblems of the ancient, primal beauty of our planet. When I saw the magnificent redwoods on the Sequoia Grove label, I felt an instant bond.

Unsurprisingly, when my husband and I ventured to Sequoia National Park for the first time in 1986, I fell in love with those gigantic conifers, too. Go ahead and call me a tree-hugger: I consider it a compliment.

Every time we ate at the Gateway restaurant, on the Kaweah River at the entrance to the Park, we ordered Sequoia Grove Cabernet from the wine list. It became a tradition: Harris Ranch beef tenderloin wrapped with bacon and a Sequoia Grove Cab. After all, motorcycling is hard work. The association of the sandalwood, cedar and cherry aromatics, along with the wine’s dusty tannins, wove a campfire memory in perfect harmony with the distinctive scents of the Sequoia-dominated forest. 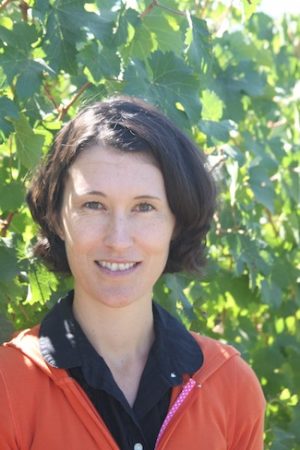 So, when I had the opportunity to meet winemaker Molly Hill, Sequoia Grove’s winemaker since 2008, I couldn’t say no. Over a lovely lunch at Sens Restaurant in the Embarcadero of San Francisco, we chatted about the wines, the vineyards, the longevity of the brand (founded in 1979) and the commitment of the family to preserving the unique vibe and taste of this redwood-blessed Rutherford domain.

Established as a 22-acre Cabernet plot by founder Jim Allen, Sequoia Grove was his attempt to find the best place on the Bench to grow Cabernet Sauvignon. In his quest to create a wine that reflected the spirit of the ancient trees that grace the property, Allen sought advice from the legendary Andre Tchelitscheff of BV, as well as from renowned winemaker Tony Soter.

Along with a trusty team that is largely still in place, Jim Allen took pride in creating lush, age-worthy Cabs of place, highlighting that quintessential Rutherford tannin core, until he retired in 2001. At that time, he turned over his portion of the winery to the Kopf family, who had been partners in the venture since 1985. 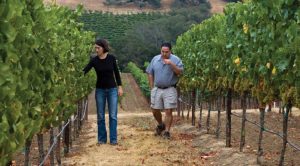 The Kopf’s tapped Michael Trujillo, who had worked alongside Allen since the early 1980s, to become Sequoia Grove’s Director of Winemaking and President in 2001. Trujillo, who had been under the tutelage of Tchelitscheff and Soter, immediately went to work to weed out the underperforming vineyards in the portfolio. Only those rated A+ by the vineyard and winemaking team would remain. As a consequence, Sequoia Grove went from sourcing 80% of their fruit, to using 80% estate fruit.

Working with vineyard manager, Steve Allen, they undertook significant replanting in the estate vineyards. This meant leaving valuable acreage fallow at the cost of $6k per ton, but it was an investment for the future. Meanwhile, in 2006, Sequoia Grove acquired the 48-acre Tonella Vineyard, also in Rutherford. It came online in 2010 and produces distinctive, plush fruit that has quickly become a fan favorite.

Winemaker Molly Hill came on the scene at Sequoia Grove as assistant winemaker in 2003, fresh from UC Davis, where she had interned at Sea Smoke and Beringer. Having just completed a harvest in Chile, she was ready for further adventure, never intending to dwell at her first “real job.” She jokingly told Trujillo she would give him one year: five years later, she was promoted to Winemaker, and thirteen years later, she’s confidently making wines that evoke and reflect the sense of beauty and authenticity of that ever present redwood grove.

At first, though, Hill’s academic background and scientific approach were certainly a contrast to the intuitive manner in which wines were being made at the time. When Trujillo suggested she chuck her refractometer in the bushes and learn to trust her gut, she had to make adjustments. She says that’s the only way they make decisions now, because,

“We want to make amazing Rutherford Cabernet instead of just any red wine.”

Under her direction, new equipment and tanks were brought in, the barrel program was tuned and the entire operation updated to pursue artisan-style winemaking in small lots. The winery currently makes about 35k cases.

You can find three of the eight wines Molly crafts today in national distribution, including the 2014 Napa Valley Chardonnay ($28), a sunshiny rendition of a California day, filled with ripe pears and peaches and squeeze of lime; the 2012 Napa Valley Cabernet ($38), an accessible American-oak aged classic, with black cherry, spice and leather; and the premium 2011 “Cambium” blend ($140), a meld of Cabernet Sauvignon (73%) and Cabernet Franc (27%), with an inky, spellbinding darkness wrapped in cedar and juniper that delivers an intense pulse of gorgeous fruit throughout the palate.

Hill describes “Cambium” as the “icon” wine, named for the lifegiving layer underneath the redwood bark that feeds the tree. She says it is an effort that reflects the quality of the vineyard sources and shows what Sequoia Grove can produce.

The new 2011 Tonella Vineyard Cabernet ($95), however, takes the concept of Rutherford Cab to a new level, delivering a rush of high-toned floral and lavender-infused aromatics that whisper of the elegant wine about to dance on your palate. And dance it does, with grace and fluidity, like a ballet of red cherry, chocolate ganache and black currant soufflé, all the while flourishing a scarf of lavender and freesia as it charms its way into your heart.

This is a wine to linger over, perhaps reading a bit of Thoreau or, better yet, Tom Killion and Gary Snyder’s “The High Sierra of California,” a collection of woodcuts and poetry that celebrate the beauty of the big trees in the back country of Yosemite, Kings Canyon and Sequoia Parks.

Hill firmly believes that the greatest wines in the world should have expression of site, and these wines clearly give voice to the great sites she has in her portfolio. As the Tonella Vineyard continues to come on line, the quiet, harmonic chorus should reach a resounding crescendo.