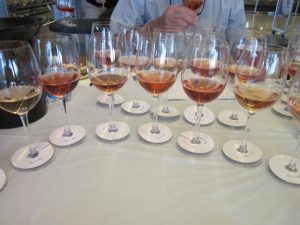 Mendocino: A Dragon With Two Tails by Laura Ness The Mendocino AVA is huge, more for its climactic variation than its total land area: Wine Institute figures indicate it spans 275,200 acres, encompassing ten distinct sub AVAs, with two more pending. The total area planted to vineyards is currently 17,000 acres: compare that to 40,000 acres for Monterey and 45,000 for Napa. Everything in Mendocino County comes down to vineyards with coastal influence vs. those without. It’s almost like a dragon with two different tails: the white tail of Anderson Valley, and the red tail of the Redwood Valley and Potter Valley. Might as well include Yorkville Highlands in the red tail, too. 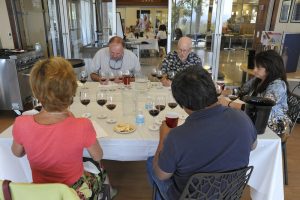 Judging the 38th Mendocino Wine Competition with wines from these two distinctively different areas included in the same overlarge wine region confirmed two things: 1.) Anderson Valley simply rocks for white wines and Pinot Noirs and 2.) Redwood Valley is a candy store for old vine beauties that continue to be overlooked. Too bad on the latter, because we were treated to some excellent editions of old vine Carignane and Charbono, along with a Negro Amaro that was close to mind blowing.

This isn’t a big competition, but it’s one of the best, mainly because the white wines are so beautifully executed, the sweepstakes lineup for the whites alone can be far superior across the board in quality than the entire shooting match at other competitions. 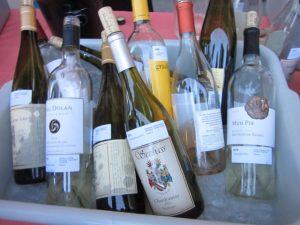 That’s because the producers here, namely, Handley, Husch, Navarro, Roederer and Scharffenberger, are wizards of white winedom, having consistently turned out sensational sparklings, chards, pinot gris, gewurztraminers and rieslings that will blow the barn doors off boredom.

So imagine being confronted with 13 wines, most of which are so well made you’d have a hard time spitting, all vying for top honors as “Best of Show White.” Now you have to choose just one, and you’ve been judging with the same panel of four or five people all day.

By now, you’ve formed a bond, miraculously arriving at Double Golds for those wines that knock everybody for the same loop, and with some discussion, awarding Golds for wines that truly deserve a push towards stardom. You’ve spent some time advocating for your favorite wines and, as a group, you’ve sent up some candidates for Best of Class in the various varietal categories.

Now, you are faced with being loyal to the wines you might have sent up vs. voting for wines other panels judged. Some people act along party lines. Others seize the opportunity to vote for something they might not have encountered in a prior flight. The time of reckoning draws nigh. My panel sent up the Pinot Rose (Domaine St Gregory) one of the Chardonnays and a Gewürztraminer (from Handley), but when faced with the awesomeness of the Pinot Blanc (Handley) and the sheer charm of the chenin blanc (Husch), we’re not backing our previous horses. Most of us vote for the Pinot Blanc.

Meanwhile, on the other two panels, the votes are split across the board on the panel that sent up the Brut (Domaine St. Gregory), the pinot gris (Navarro), the Late Harvest Gewürztraminer (Husch) and the Chenin Blanc. They end up voting for what each believed to be the superior wine. 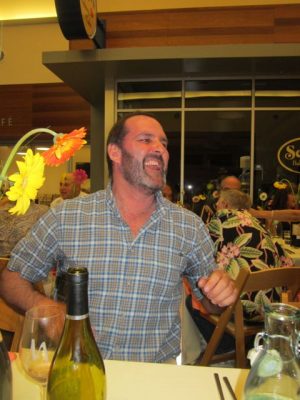 On the third, and deciding panel, which sent up the Pinot Blanc and Edelzwicker (Alsatian blend from Navarro), there is much discussion and in the end, the consensus is that the sparkling is the most worthy. Most vote accordingly and that’s the wine that wins. Not that it wasn’t deserving. Winemaker Greg Graziano did a nice job on this and the other sparklers he submitted, and to finally win Best White at a wine competition that has almost always gone to Handley or Navarro, is a big freakin’ deal.

Interestingly enough, one of the members of that panel later confesses angst over not voting for the pinot blanc. That swing vote will haunt. Regardless, the 2012 Pinot Blanc from Handley Cellars was one of the best examples of that particular varietal any of us had ever tasted. And we’d vote for it again and again.

And right after that, we’d vote for the charming and classic Husch 2012 Chenin Blanc, a variety that deserves more love. The family behind this wine, which you can fairly easily find in retail shops, has kept the flame burning for this once worshiped varietal for nearly 40 years, long after it was ripped out in favor of the next big thing, which I think was grey Riesling. Then along came chardonnay, and nothing has been the same since.

Did you know that in the 1970s, Charles Krug produced 125,000 cases of off-dry Chenin Blanc? Alas, plantings of this lovely white that hails from the Loire (where it is called Vouvray), have declined by as much as 80% since the 1980s. Today, it’s grown mainly as a blender for sparkling and jug whites. But Husch winemaker Zac Robinson at makes it sing like a caged bird finally free.

And then, came the vote for “Best of Show Red.” We were confronted with seven worthy choices, including a lovely Pinot Noir (Handley Cellars Helluva Vineyard), a sensational Carignane (Zina Hyde Cunningham), a saucy Syrah (Meyer Family), a sweetish Zinfandel (Artezin), a zingy and racy Negroamaro (Monte Volpe), an aged and worthy Cabernet Sauvignon(Milano Family), and an outstandingly mature Merlot (ARTEVINO).

One chance to make history by choosing a seriously interesting wine (most of my panel voted for the Carignane), and the same panel that punted the sparkling over the goal post put the zinfandel into the winner’s circle. Why? Because it was a “safe choice.” Those were the exact words used.

Irony of ironies, it turned out to be made by Napa-based Artezin from Hess Collection, once again proving the point that winegrower Charlie Barra has been making for years: Napa wineries buy lots of fabulous Mendocino fruit and take it to the bank.

Yes, it’s a nice, well-behaved wine: I have always thought Artezin made some of the most approachable, balanced, well-mannered and well-priced zins – this one is $18 and a good value.

But the story would be far more interesting if we were debating how to pronounce “Carignane.” I heard at least four different takes on it. Hopefully, by next year, we’ll all know what this safe choices-be-damned grape tastes like.