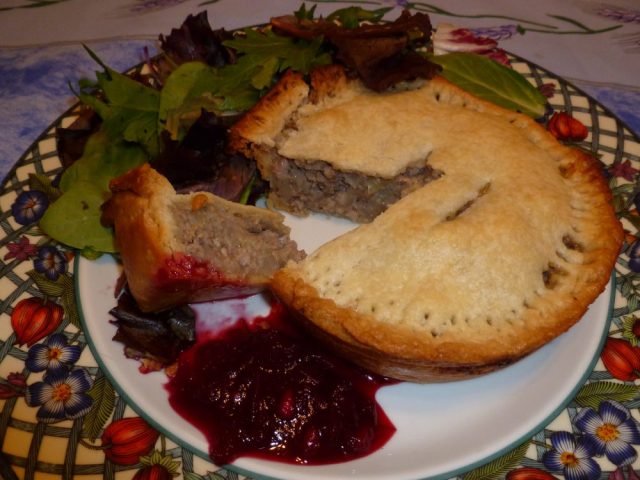 The History: When Pies Both Nourished and Entertained 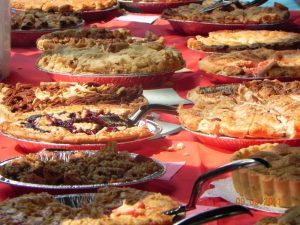 So who gets the credit? According to food historians (yes, that is a job; yes, you should totally grow up to be one), pies date all the way back to ancient Egypt. But the real Pie Geniuses—the ones who made it a new art form, realizing all the ridiculously fun things you can stuff in a giant pot of dough—were the medieval British. 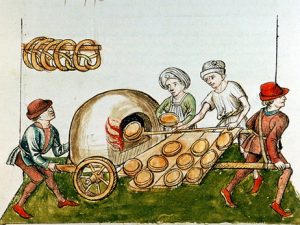 Here’s the scoop: way back when, ovens were just giant, covered fire pits. Any baking container you shoved in there would melt or explode. So instead of baking in pots and pans, people just baked in massive bowls of thick, hard pastry. These were made of flour, water, and lard, so dense you could mold it like play-dough, and several inches thick to withstand hours over a blazing fire.

Pie crusts were nasty—eating one was like chomping down on a slab of gravy-slathered concrete. People just ate the contents of the pie, and left the crust for the beggars to soak in water or beer and morosely slurp down like cement pudding. 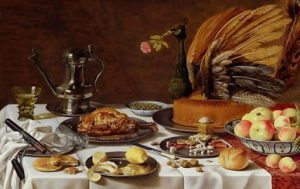 Pretty much everything was cooked in a pie. This meant that chefs of wealthy households vied with each other to jam the craziest stuff they could think  of into them. Pies stuffed with exotic meats were a classic fave, since only the wealthy could afford good, old-fashioned protein. But the common chicken was for peasants, by jove! The medieval 1%—actually, it was more like the .000000000001% back then—thought it was way awesomer to eat pies stuffed with swans, peacocks, and herons. Or, if you were at the royal court, a classic Christmas pie of a pigeon stuffed in a partridge stuffed in a chicken stuffed in a goose. Who cared if they tasted nasty? They looked so totally badass!  Especially when you killed one, stashed it in a pie, then killed another, roasted it, and jammed all its feathers back on so it looked alive. Medieval people thought it was fan-freaking-tastic to put a dead, stuffed peacock on top of a peacock pie. “Wanna know what’s in this giant pot of concrete dough I’m sitting on? It’s another me! Heck yeah, chow down!”

It was super fun to have a dead thing that looked like a live thing in your pie. It was even more fun to have a real live thing bust out of it! All you had to do was bake a massive, empty pie shell and put a hole at the bottom. Then you shoved a whole bunch of birds in there and plugged it up. When Lord Fancypants cut into it, the tremendously freaked-out birds would all fly out at once, squawking and spiraling and, we must assume, pooping absolutely everywhere.

As the Renaissance brought Enlightenment, humanism, progress and maturity, people got even better ideas about what to put in pies–like dwarves waving swords!! In 1630, Charles 1st sat down to eat what he imagined was a vast game pie. Before he could hack into it, a dwarf slashed his way out with a sword and began dancing on the table. Huzzah! The Dark Ages were over! (**sprinkle heavy dash of sarcasm**)

The Renaissance also brought more refined pastry techniques, ending the days of No-Way-In-Hell-Will-I-Eat-That-Nasty-Crust. But today, we celebrate those brilliant medievalists by baking a decadent meat pie with traditional, medieval spices. You can bake it in a big pie dish to serve in luscious, meaty slabs, or pop a bunch in a muffin pan to make rather adorable (and oh-so-portable) mini-pies. Bring them to lunch, parties, or just your very lucky dinner table.

Wine Pairing Advice: Tourtiere can be served with either whites or reds, but I think that reds go better (and in Canada, where the dish originates, red is what is traditionally served). Try pairing meat pies with light to medium-bodied reds and wines that are big on fruit like a Beaujolais or a Pinot Noir. Fuller-bodied Côtes du Rhône is a wine that also pairs well. Stay away from pairing any heavy, rich, earthy wine that will beat up the subtle flavors that come from the blend of beef, pork, and veal with the spices in this pie.

1.) First thing’s first: make your pie shell. I find that frozen pastry dough works remarkably well. If you’ve got a tried-and-true recipe for pie dough, go ahead and use it–this recipe is quite flexible with different crusts! Otherwise, Trader Joe’s has a cheap, delicious box. Follow the directions on the box to defrost, and then take one of the pastry rolls (there will be two) and roll it out on a piece of waxed paper sprinkled with a bit of flour. Keep the other in the fridge for now–that will be your top crust.

2.) Pre-heat your oven to 450F. Then take our whatever pans you’d like to make this in. This recipe will fill a 9-inch pie pan for a large pie. It will also fill 12 jumbo muffin cups, or about 15 regular-sized muffin cups. Generously butter your pans (or spray with cooking spray) and cut your pastry dough to a size that will fill the pan. A 12-inch round will fill a 9-inch pan, and a 6-inch round should fit a jumbo muffin pan. If using muffin pans of other, varying sizes, just cut to fill each cup completely: I find that pressing the rim of a mug upside down on the dough makes a circle of a perfect size!

3.) Using a fork, make a bunch of little indentations in the crusts. Then fill each muffin cup (or 9-inch pan) with aluminum foil, stretched to cover all the dough. Then place pie weights in. If you don’t have these, just pour in dried beans or rice. The point is to keep the dough from poofing up. Pop your pan/pans in the oven for 9–10 minutes. You’ll know it’s ready when the dough has hardened a bit and looks flaky. Take it out and set it aside. Lower the oven temperature to 400F.

4.) Place all the other ingredients in a sauce pan and bring to boil. As soon as the mixture is bubbling, bring the heat down to a simmer (over medium heat) and cook uncovered for 20 minutes. It’s ready when the meat is no longer pink, and the onions and potato shreds are softened. At this point, take a little taste. This is when I like to adjust my seasonings: add more salt or–in my case–more spices. I love my meats generously spiced!

5.) Cool the meat mixture (let it rest for about 10 minutes) and, in the meantime, roll our your second pastry crust. When the meat mixture is cooled, pour it into your pastry lined pan/pans. Then, depending on what sized pans you used, cover with the top crust. You will want the two crusts to meet with a little overlap. Press the edges together, and crimp with a fork to “glue” them. Cut steam vents and bake in a 400F oven until golden, about 45 minutes for a full-sized pan, and 25-30 minutes for a muffin pan.

6.) Serve hot! This is a traditional French Canadian dish, and they like to serve it with various relishes: green tomato relish, pepper relish, even various sweet relishes like cranberry sauces. We used Trader Joe’s cranberry pomegranate relish, which was delicious. However, it’s also absolutely delicious without any sauce at all–the meat mixture is incredibly flavorful. Serve it with a side of mixed greens and dig in (crust and all!!) 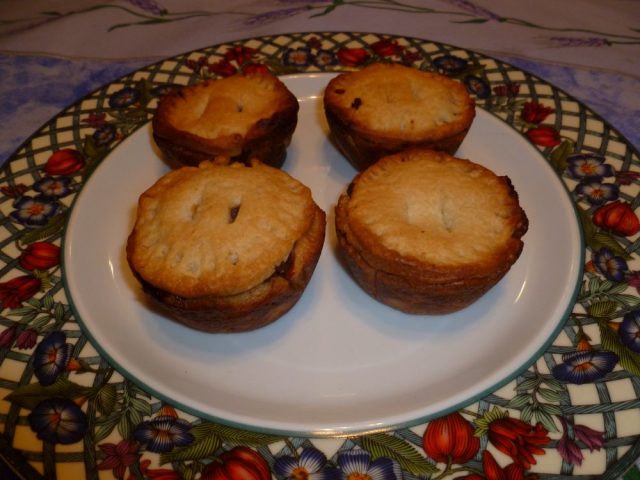 Ali Weiss is in the final year (trumpets, please) of her PhD program at U.C Berkeley. Although she hopes to soon stand before a teeming, hundreds-strong mass of undergraduates to preach American History, she’s got a thing for the medieval era (great clothes! great food! too bad about the life expectancy…) In between hammering out a dissertation, she likes to cook. This distracts her, makes her feel productive, and ensures that the only things receiving her dissertation flak (aka mumbled jabberings about antebellum miscegenation laws) are her stove, her oven, and her cat (who seems to deeply care). She uses her Food & History blog, cliocooks.wordpress.com, to indulge in deliciously non-scholarly writing and recipe evangelism.