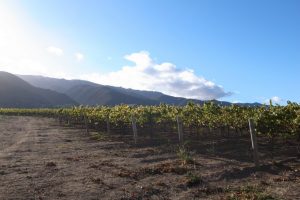 Spending the day tasting through red wine and white wine from Monterey’s amazing Santa Lucia Highlands is a wine lovers dream come true. The only hard part of tasting this legendary line up of Chardonnays and Pinot Noirs is picking a few to review. With that in mind here are a dozen wines that I think were simply divine.

2011 Bernardus Sierra Mar, $40: brilliant execution with a pleasingly grippy texture of peach skins and rich shortbread, as elegant as Blythe Danner in satin.

2012 Mooney Family, $44: from the Boekenoogen vineyard, this is like drinking butterscotch pudding with a topping of bourbon crème anglaise.

2012 Morgan Double L vineyard, $42: encapsulates all the charm of a tangy apple torte, with lovely acidity.

2011 Pelerin Sierra Mar, $42: thrilling rendition of lemon cream pie with absolutely flawless balance, like a gymnast on the parallel bars.

2012 Testarossa, SLH, $35: swimming with stonefruit and verging on tropical, you have to admire the toasty marshmallow and hint of coconut.

2011 Scheid Reserve, $38: From Doctor’s Vineyard, this is packed with mango, apricot and tropical fruit. For those who really like oak.

2011 Scheid Reserve Doctor’s Vineyard, $65: powerful yet winsome pinot aromatics, awesome structure and all the dark drama you want in a substantial dark fruit-driven wine. Not yet released, and definitely in need of some more time to mellow out. Or not.

2012 Mooney family “El Pistolera”: from Vigne MonteNero and Boekenoogen vineyards, this neutral barrel-fermented wild child is raring to go with intense, palate-attacking fruit, mostly black with that rich cherry chocolate pudding that Boekenoogen fruit can attain when really ripe. It’s a pistol, for sure. Not yet released, and probably should come with a warning label.

2011 Wrath Tondre Grapefield, $49: lean, earthy, savory and packed with everything from raspberries to salami. A really gutsy pinot. 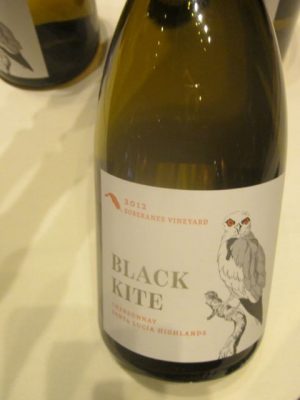 It’s also about showcasing the best of the “new” bloods on the block. Most impressive was Black Kite, whose renditions of both the 2012 Soberanes chardonnay and the 2011 Soberanes pinot both set benchmarks for how to treat this precious fruit. Rebecca and Tom Birdsall are all about purchasing the best French oak, and it totally shows in the final product. They were the top buzz at this trade tasting, without a doubt. Theirs was probably my favorite chardonnay of the entire day, and I know Jane Goodall must have enjoyed sipping some at her birthday party (her 80th), which was held last weekend in San Francisco to raise money to liberate gorillas that have been mistreated. 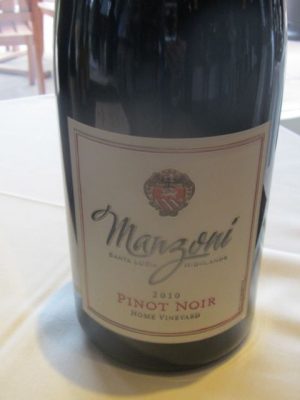 If I had to pick one single portfolio where everything shone in a stellar fashion, it would be the Manzoni lineup. The 2012 pinot gris is gushing with nectarine and lime, while the 2012 North Highlands Cuvee chardonnay delivers massive bang for the buck, with its superbly creamy texture and veritable can-can of high kicking stonefruit wrapped in lemon buttercream. Every time I taste the 2011 “Home Vineyard” pinot I’m reminded how good that troublesome vintage turned out for the really talented winemakers. Go, David Coventry! If there is one under priced pinot in the SLH right now, it’s this one. Mark says that using a Seguin Moreau barrel, in addition to the Francois Freres he’s fond of, adds a unique pumpkin pie spice that really comes through here. I swear I tasted a bit of curry in addition to all that nutmeg.

Gary Pisoni was wowing the adoring throng with his tasty and dainty 2013 “Lucy” rose and a somewhat dormant 2012 Soberanes pinot that will benefit from some cellar snooze-time. The gregarious champion of the grape was also pouring a way too young but totally off the hook, intensely profound 2012 syrah from the Soberanes vineyard. It was like handing “War & Peace” to a 5 year old. Not going to get much out of this one for a while, but it will certainly be well worth laying down for at least 3 years, and I wouldn’t be surprised if it could go 20.

Tom Stutz of La Rochelle was having a lot of fun pouring the 2011 Rosella’s chard, which is impressively crisp and zippy, along with the elegant blackberry-packed 2010 Paraiso Vineyard pinot, made from mostly old Martini and Pommard clones. Sadly, that vineyard block got ripped out in 2013. The stunner in the lineup, though, is the 2010 Sleepy Hollow pinot, another one for the history books. Here, Martini and Clone 113 make merry in the mouth, where more savory flavors than sweet were showing on this day. The aromatics of fern, moss and chervil are amazing. Serious, intellectually stimulating stuff. 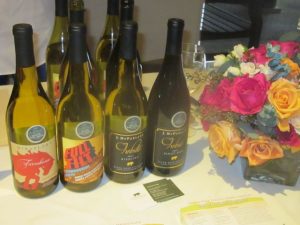 Stephanie McFarland brought her Percheron-McFarland wines, including the excellent 2011 “Tribute” pinot noir, which honors her late husband, Jerry, who planted both the original Hahn vineyards and Sleepy Hollow over 30 years ago. It’s hard to beat her “Full Tilt” chardonnay for an unoaked blaze of stonefruit at only $12 per bottle. Killer!

Pretty much all the 2012 chardonnays sing like a halo’d choir and the pinots reverberate with a carillon of melodic flavors. The 2011’s are a little tighter and moodier. Some wines I loved at the San Francisco trade tasting in January were having a teenaged wine’s version of a bad Facebook day, revealing darker sides to their complex personalities.

The single vineyard designates keep growing in number, and it was fun hunting down the Sierra Mar and Soberanes vineyards wines, both managed by Gary Franscioni and Mark Pisoni (son of Gary).

The “pepper power” award goes to Wrath’s 2011 KW Ranch syrah, a ball of savory fire from the white pepper and flint in the nose, to its blend of lavender, rosemary and coriander woven seamlessly with red plums and roasted fennel. KW Ranch is owned by winegrower Kirk Williams: it used to be known as Fairview.

The public tasting of these awesome wines and more will be held on Saturday, May 17, from 1- 4pm at Mer Soleil on River Road. Tickets: santaluciahighlands.com.