Wine Country Gone Hollywood: Napa Valley Film Festival: I’m not sure if it’s because I grew up in Hollywood or if it’s because I’ve always been a believer in the magic of make believe but there is something so special about watching a movie. Films can truly take you out of yourself and into another world. Someone once told me, “if you touch someone’s heart you change the world”. Movies have touched my heart and my soul more times that I can count, and that’s one of the reasons why it was such a treat for me to attend the Third Annual Napa Valley Film Festival.

If you know anything about me, then you know these are a few of my favorite things: Wine, Food and Film (in no particular order). Working as an entertainment reporter for a good part of my career, I have covered my share of red carpets, but never with a glass of wine in my hand. If you didn’t get a chance to attend this year’s Napa Valley Film Festival, or you went and want to relive the fun, then I invite you to sit back and watch this video highlighting the hottest ticket in town. We get up close and personal with Hollywood heavy hitters, get the inside info on the feel good film of the year “Saving Mr. Banks”, and get a taste of two wine films on tap: “Red Obsession“ with director Warwick Ross and “Dossier Zinfandel”. It wouldn’t be the Napa Valley without some wines to die for, so we got our hands on the world’s most sought after wines with Benchmark Wine Group. 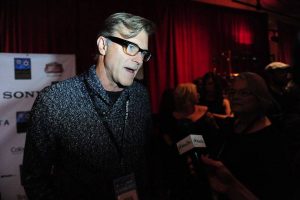 It doesn’t matter if you are a Wine Oh, a Foodie or a Film Buff; the Napa Valley Film Festival has something for everyone. Do you watch movies or drink wine as a way to relax, escape the everyday or do you want to be inspired to greatness? Maybe it’s all of the above. In the quote below, director John Lee Hancock  gave me some insight on what makes his film “Saving Mr. Banks” so special, but for me it’s that kind of magic that makes life so special.

*Thank you to the Napa Valley Film Festival for allowing me to use some of their still photographs for this story.

The Girl on the Train, Directed by: Larry Brand

My Brother Jack, Cinematography by: Kerim Duran and Directed by: Stephen Dest

The Listing Agent, Directed by Matthew Helfgott and Jared Hillman

Andrew Pastides (who played Hank in Hank and Asha)

Mahira Kakkar (who played Asha in Hank and Asha)

The Listing Agent, Directed by Matthew Helfgott and Jared Hillman