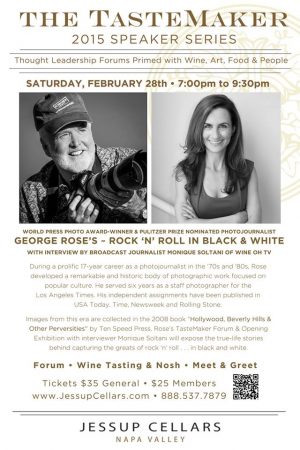 Join me at Jessup Cellars on February 28!


Come to Napa Valley for the Jessup Cellars 2015 TasteMaker Speaker Series that kicks-off on Saturday, February 28 from 7:00pm to 9:30pm with acclaimed photojournalist George Rose’s Rock ‘n’ Roll in Black & White forum and exhibition. During a prolific 17-year career as a photojournalist in the ‘70s and ‘80s, Rose developed a remarkable and historic body of photographic work focused on popular culture. Images from this era are collected in the 2008 book Hollywood, Beverly Hills & Other Perversities by Ten Speed Press.

Guest host Monique Soltani of Wine Oh TV will use her investigative prowess as a television broadcaster to extract Rose’s true-life stories behind capturing the greats of rock ‘n’ roll…in black and white.

Tickets are $35 each at CellarPass.com and include interactive forum, meet-and-greet, wine tasting and nosh.

Rose is a recipient of a 1987 World Press Photo Award for news, and was named California Newspaper Photographer of the Year in 1976 by the University of Missouri, School of Journalism. The Los Angeles Times twice nominated him for a Pulitzer Prize. He served six years as a staff photographer for the Los Angeles Times. His independent assignments have been published in USA Today, Time, Newsweek and Rolling Stone. For the past twenty-five years, Rose has held four high-level public relations positions in Northern California’s Wine Country.

Rose’s Rock ‘n’ Roll in Black & White exhibition runs February 28 through March 31 in celebration of the inaugural launch of the Yountville Live! Music Festival happening March 19 through 22. Festival headliners include O|A|R, Colbie Caillat, Matt Nathanson and Blue October. Presented by Volvo with supporting sponsor Sunset magazine, Yountville Live! combines the very best in music, wine, and food with the small-town lifestyle and sophisticated ambiance of Yountville. In its role as a supporting sponsor, Jessup Cellars will be hosting a series of intimate events featuring artists Scars on 45 and Jon McLaughlin during the festival. Visit YountvilleLive.com for complete details and to purchase tickets.