Why Kiwi Wines are King in California

The United States drinks more wine than anywhere else in the world and California is the largest wine consuming state in the U.S. with 17.7% of the share. Wine enthusiasts in San Francisco and New York drink more New Zealand wines than anywhere else in the country. In this wine video, Wine Oh TV’s Monique Soltani heads to a New Zealand wine tasting in San Francisco and interviews winemakers Neill Cully of Cable Bay Vineyards, Sam Smail of Whitehaven and New Zealand wine specialist Master of Wine Bob Campbell and discovers in every glass of New Zealand Wine is a world of pure discovery.

Curious why Kiwi is the nickname for people from New Zealand? The name comes from the kiwi, a flightless bird, which is native to, and the national symbol of, New Zealand. Calling someone from New Zealand a Kiwi is not considered offensive, in fact by many it’s considered a term of endearment. 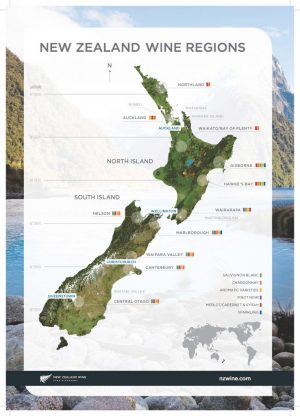 SOUTHERLY STYLES: Marlborough and other cool-climate regions: Typically medium to light bodied with greater acidity and minerality and fresh, citrus and savory flavors.

WAIRARAPA: Darker fruit aromas, often with a savory component. Rich, full, sweet fruit on the entry with flavors in the dark plum and chocolate spectrum. The structure of the wines are based around long, fine tannins.

CLIMATE: predominantly grown in the warmer regions of Auckland/Northland and Hawke’s Bay which get extended heat accumulation due to lower diurnal temperature variation.

CLIMATE: Predominantly grown in the warmer regions of Auckland/Northland and Hawke’s Bay which benefit from extended heat accumulation due to lower diurnal temperature variation.