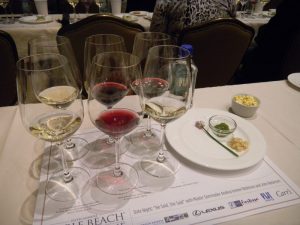 Pebble Beach Wine and Food festival is held in two main locations. The Lexus Grand Tasting is held at the Pebble Beach Equestrian center and the classes are held at the Inn at Spanish Bay. The Inn at Spanish Bay, at no less than $650-$2,800 per night, sits at the foot of one of the most famous golf courses in the world. Guests can explores the course or enjoy secluded beaches and coves. This resort held the 28 classes in their many banquet rooms. Each room, stationed with sommeliers, walked attendees through a variety of classes that only some would dream of attending. Ever wondered what a flight of Château Haut-Brian, Château Lafite, Château Margaux, or Château Mouton Rothschild tasted like side by side? How about take a seat at: “Celebrating 30 years of First Growth Bordeaux.” If new world wines are your thing, how about a flight of Ovid, Scarecrow, Meteor, Futo, and Dana side by side? You could find these wines in the class: “Napa’s Generation Next, Cult Cabs in the New Millenium,” all while listening to sommeliers and marketers debate if the cult cab is dead or alive. If wine isn’t your thing, join in a cooking demonstration at the Cooking Pavilion with top chefs like Michael Chiarello, Anne Burrel, Todd English, Tyler Florence, Jacques Pépin, and Guy Feiri. 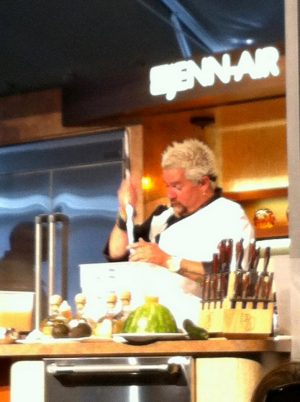 This year, Wine Oh TV spent some time exploring and learning in two of the classes offered. “Cookin’ It. Livin’ It. Lovin’ it,” was taught by the loudest chef of the bunch, Guy Fieri. Nothing about this chef is an understatement, from the hair, to the cooking, to the super-sized yellow Chevy 4500 Kodiak that he drives. His class was fast-paced, funny, and energetic and he epitomizes the rock-star chef persona, but comes across as a lovable teddy bear.

The other class, “Date Night: He said, She said,” featured Master Sommelier, wine critic, wine writer, mom, and wife, Andrea Robinson and her culinary creative husband, John Robinson. This duo did a wonderful food and wine pairing class while maintaining a playful banter throughout. They began the class with an interesting pairing of truffle flavored popcorn with Champagne and Pinot Noir. They claimed that both wines go quite nicely with the popcorn because of the toastiness of the popcorn and the earthiness of the truffle oil. They encouraged guests to try other interesting popcorn pairings such as herbs, rosemary, caramel, and cheese. When trying the other food and wine pairings presented to the class, they also emphasized that good food and wine pairings are all about “The prep, not the protein.” Basically, how a meat is prepared, can affect how wine pairs with food. The class ended with John describing how nervous he was about picking out a wine for dinner date with his new girlfriend, the wine author and Master Sommelier, and his dad gave him some fatherly advice, “Read her book!” Many years, and two kids later, they told the class that their favorite date night is to sit at home with a bottle of white wine and he makes her lobster tossed with pasta, shallots, vanilla beans, and butter. Oh la la!

All in all, the Pebble Beach Food and wine festival is a must do! It is has all the world classiness and flashiness that a wine event should have. There wasn’t a missed beat in the entire event and it would be hard to beat the success of this event year after year. As promised, below are some top wine picks, and really, there could’ve have been many, many more.

Clean, fresh, and bright, with tropical and mineral notes that give way to a round, soft, mouthfeel.

Deep, dark fruit fades to intense flavors of cassis and molasses, with a soft, rich texture on the palate.

A perfect 100% Sangiovese with ample acidity and pucker which reveal notes of black pepper, tar, red cherry, licorice and a touch of tannins

Intensive toasted oak notes with a hint of smokiness. Complexity lends itself to the earthiness and fruit flavors in the nose and palate.

Ample red fruit on the palate, with notes of oak. Bright acidity and earthiness to balance out the complexity of this wine

Interesting, complex Cab with all the richness that one would expect. Notes of cassis, chalk, chocolate, and dark, luscious purple fruit.