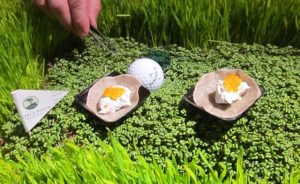 Thursday night’s Grand Opening of the 6th Annual Pebble Beach Food & Wine extravaganza at the Inn at Spanish Bay was plenty well-attended, but according to longtime opening nighters, it was less crowded, easier to navigate and the food was far superior. It’s always a delicate gamble, attracting rockstars to the party and yet guaranteeing that they’ll actually perform to the hype. Sometimes, stars get a bit too jaded, and they get lazy, serving up uninteresting stuff that anybody with a pound of donated caviar could whip up. Behind the scenes at Pebble, Coastal Luxury Management endeavors to showcase chefs that will, as behind-the-scenes organizer and “chef whisperer,” Dorothy Maras-Ildiz, puts it, “Show up and step up!” If you don’t, you might not get invited back. 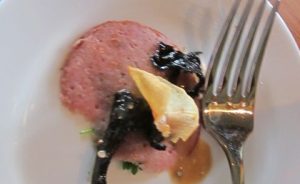 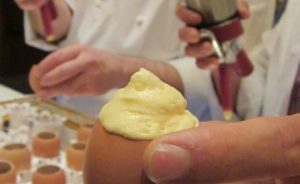 My “silver quiver” award goes to Chef Cal Stamenov of Bernardus for killing two birds in one dish with his squab liver mousse served with black truffle brioche and quail consommé, a dish that was worth every last, scrumptious, flavor-packed calorie. 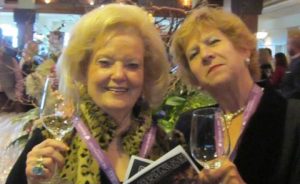 The next morning, I dove into a tiny-bubbled sea of ten very small production grower Champagnes, hand-selected by Antonio Galloni himself. They represented some of the more daring adventures in bubbly-making by people who are not afraid to lay it on the line. Most of these gems will not be found here in the US, but if you could, I would suggest to buy a case of the “Inflorescence” by Cedric Bouchard, an amazing burst of the teensiest bubbles, bottled under only 3 atmospheres of pressure, instead of the usual 5. 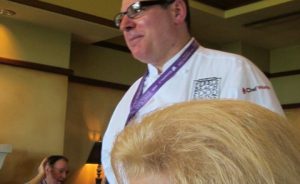 From France, I grabbed my Passport and headed for a “Day In Italy” lunch, served at Peppoli restaurant. This elaborate affair presented the tasty talents of four featured chefs, who kept the flavor ball rolling from an extended onslaught of appetizers through a soundly conclusive dessert. The wine pairings were well thought out and really helped conduct the various bridal parties down their respective aisles handsomely. 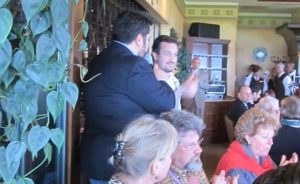 Per-lunch, we floated along the veranda overlooking the greens that lead to the beach, prosecco-fortified, while munching Chef Michael Romano of Union Square Hospitality Group’s smoked whitefish and egg salad on flatbread, Chef Angela Tamura of Peppoli’s butter-poached shrimp with handmade tagliatelle and herbed croutons, Chef Paul Bartolotta’s Venetian soft-shell crabs and Chef Fabio Viviani’s peppercorn-encrusted tuna belly. The meal commenced with Carmen Quagliata from Union Square Café presenting a petrale sole served atop a sweet pea bisque with chile vinaigrette, served with a lovely Pio Cesare 2011 arneis from Alba.  Cesare is one of two winemakers in Italy who has been making arneis since the 1970s. 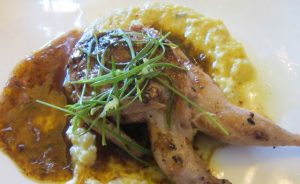 Chef Bartolotta, whose eponymous restaurant is at the Wynn in Vegas, returned with an Agnolotti del Plin, a rich and fabulous Piemontese meat-filled, grated cheese-infused mini ravioli dish, paired correctly with a 2008 “Yume” montepulciano d’Abruzzo, DOC, from Caldora, made in stainless bariques to preserve the cherry bacon ferocity needed to cut through the dense concentration of salt and fat.

Hailing from Firenze, with restaurants in Moorpark (Café Firenze), and Chicago (Siena Tavern), Chef Viviani, who wears the name Fabio rather well, wowed us with his sundried tomato and ricotta-stuffed quail, served with herbed polenta and bone marrow demi-glace. This fascinating dish was handled gamely by the 2009 Querciabella Chianti Classico, from the first biodynamic winery in Italy. Its dry herbaceousness complimented the herbal flavors of the dish. Chef Tamura returned with a plum cake panzanella served with almonds and goat cheese gelato, accompanied by a Vin Santo of montepulciano to conclude the Italian journey. 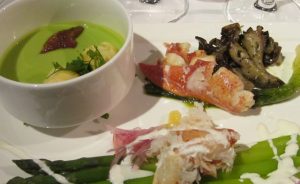 The crowning culinary jewel of the day, though, was the Battle of the Coasts: East, served at The Lodge at Pebble Beach in the Stillwater Grille. Every dish was sensational, and how can you go wrong with Taittinger’s 2000 “Millesime” poured out of magnums? Mais ouis! We began with “Three Signs of Spring,” an energizing, beautifully executed trio of velvety English pea soup, rich housemade bacon and cheddar gougeres, along with chilled asparagus and Dungeness crab drizzled in saffron vinaigrette, alongside a magnificently sensational warm baby leek salad with mushrooms, tarragon and Maine lobster. Presented by Chef Mark Gaier and Clark Frasier of Arrows in Maine, and served with a 2011 Sohm & Kracher gruner veltliner from Austria, hats off to using local west coast bounty with a creative touch of Maine.  This dish and wine combo was like a delicious edible incantation of Vilvadi’s “Rites of Spring.” 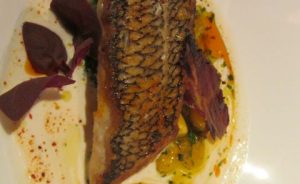 Then came Jose Garces of Garces Group’s (whom I recently met at Pigs & Pinot, a great talent with restaurants nationwide) sensational roasted black bass, served in an ajo blanco (satiny Spanish white almond garlic soup), topped with pancetta crisp, tangy Cape Cod gooseberries (yum!) and shaved Marcona almonds, accompanied by a 2010 Pahlmeyer chardonnay from Sonoma Coast. This was simply one of the most delightfully different, flawlessly flavored fish dishes ever – I didn’t see one speck of anything remaining in anyone’s bowl at my table. It was a stunner. 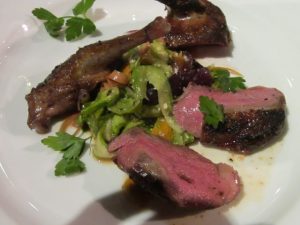 Pretty sated by this point, we were met by a rafter of Jonathan Waxman of Barbuto’s grilled squab, served succulently rare and juicy with shaved asparagus and multicolored carrot salad, and capped off handsomely by the 2007 Flowers Sonoma Coast pinot from the Frances Thompson vineyard. Those squab supposedly flew in from Modesto, but the pigeons hanging out on the roof at Pebble while we were enjoying apps on the deck, conveniently pooping on the tables below, looked pretty much like ideal candidates for a redux of this tasty dish. Someone at the table asked what squab was: I conveniently told her they were like very plump quail. 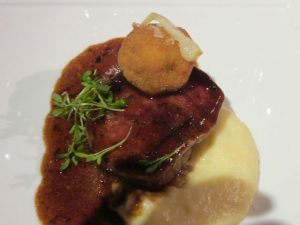 Then, came the Creekstone dry-aged sirloin, from Geoffrey Zakarian of The Lamb’s Club, topped with black truffle tarragon jus, and served with sweetbread and octopus croquette along with pommes aligot (cheesy mashed potatoes). Teamed up with two vintages of Opus One, the splendidly well knit-together 2004, and the still vibrant with fruit 2007, this was another fine pairing, fitting of an event with Food & Wine in its title. As my tablemates shuffled off to enjoy an evening of late night after parties, I could not help but reflect on the amazing culinary bounty we have to enjoy, from coast to coast. We are truly blessed, from sea to shining sea, and events like Pebble Beach Food & Wine should make us all the more grateful for these precious gifts.