Peter Mondavi, Sr. Passes Away at 101, Looking Back at a Wine Legend (VIDEO) 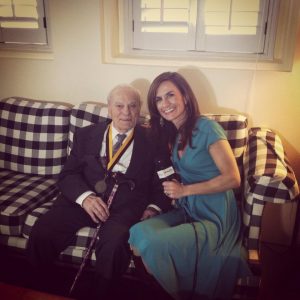 I’m so sad to hear of the passing of Mr. Peter Mondavi Sr. at the age of 101. The wine industry has lost a great visionary but his legacy lives on and will never be forgotten. I had the pleasure of meeting him several times and got married at his winery.

He was always so charming, gracious, and full of life. He told me once that secret to living a long life was to “drink wine everyday!” And that Mr. Mondavi we will do in honor of you.

It was a great honor for me to interview Peter Mondavi, Sr. on several different occasions. Here are those interviews. Please watch them with a warm and open heart and open a bottle of Charles Krug Wine.

Here was my first on camera interview with Peter Mondavi, Sr. in 2011 when Charles Krug Winery celebrated its 150th Anniversary.

In the above video, I interviewed Peter Mondavi, Sr. in 2012 right after he was inducted into the Vintners Hall of Fame. After nearly seven decades dedicated to pursuing his passion, 97-year-old Peter Mondavi, Sr. made history by becoming the oldest living inductee into the Vintners Hall of Fame last month. In 1943, the Mondavi Family purchased the Charles Krug Winery and remains the name behind Napa Valley’s oldest commercial winery, where they continue to be innovators in the industry.

This video is from 2013 when I got to share a seat with Peter Mondavi, Sr at the 2013 Vintners Hall of Fame. The highlight for me is when Mr. Mondavi told me to “Keep up the great work” and I even got a kiss on the cheek!

We are dancing and drinking in your honor, Mr. Mondavi, today and everyday.