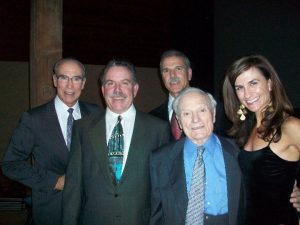 In the above video, I interviewed Peter Mondavi, Sr in 2012 right after he was inducted into the Vintners Hall of Fame. After nearly seven decades dedicated to pursuing his passion, 97-year-old Peter Mondavi, Sr. made history by becoming the oldest living inductee into the Vintners Hall of Fame last month. In 1943, the Mondavi Family purchased the Charles Krug Winery and remains the name behind Napa Valley’s oldest commercial winery, where they continue to be innovators in the industry.

In this video, Wine Oh TV’s Monique Soltani interviews the living legend who has managed to save time in a bottle for nearly a century and finds out about a birthday bash 187 years in the making.

This video is from 2013 when I got to share a seat with Peter Mondavi, Sr at the 2013 Vintners Hall of Fame. The highlight for me is when Mr Mondavi told me to “Keep up the great work” and I even got a kiss on the cheek! 🙂