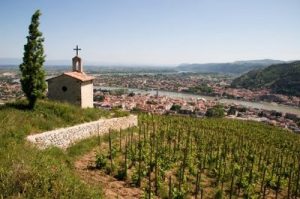 If a grape could speak, Petite Sirah would have plenty to say. It would tell an intriguing story that began in the Rhone Valley in Southern France in the 1870s. Created by a little know botanist, Dr. Francois Durif propagated a unique vine that was virtually fool-proof against grey rot, a common vineyard ailment.  Thinking he created an intriguing cross (breeding two different varieties of the same grape species)  of tight clustered, thick skinned grapes, he decided to name the vine after himself. Unfortunately, the grape failed to produce high quality grapes France had become accustomed too. Thinking the grape was a complete failure; it was shipped to California in 1884 and introduced as a blending grape. American growers, not in love with the name Durif, chose its other name: Petite Sirah, swapping out the “y” instead of the “i” to avoid confusion with Syrah. 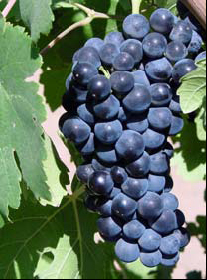 Luckily for Petite Sirah, the grape became popular during prohibition. Because of its thick skins that Dr. Durif created almost 50 years prior, the grape was able to hold up well to cross-country shipping for home winemaking kits. Once prohibition was repealed, Petite Sirah slipped back into anonymity and become a popular grape used in the generic “Burgundy” jug wines. Field-blending was common practice then and Petite Sirah was inter-planted with many other varieties such as Zinfandel, Carignan, Grenache, Mouvedre and Alicante Bouschet.

Slow to fame, Petite Sirah acreage depleted to a low of 1,400 acres in 1990. In 1996, Dr. Carole Meredith began DNA testing on the vine and confirmed that Petite Syrah was the offspring of Syrah and Peloursin, an old French variety.  Petite Sirah surged in popularity once again and in 2002 the campaign “PS I Love You” was created to enhance the growth, marketing and understanding of Petite Sirah. Events such as Dark and Delicious and the Blue Tooth Tour showcase the varietal around the country. 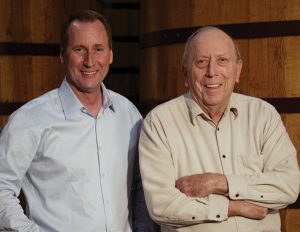 Petite Sirah can also contribute its popularity to 3rd generation vintner, Jim Concannon of Concannon Vineyard, who is also known as the “Father of Petite Sirah.” In 1961, Jim Concannon bottled the first varietal Petite Sirah in the US. He must have known that its deep, dark color, with full flavors of dark berry, black pepper and striking meaty notes which pairs well with BBQ, would make a great bottle of wine!  John Concannon, son of Jim Concannon, says that the same Petite Sirah vineyard plot still remains in the same spot where John’s grandfather, “Captain Joe”,  purchased and planted cuttings from France in 1904 and has continued to be planted with the heritage grape. He suggests that the grape thrives  in his family’s vineyard because of the climatic conditions and gravelly soil similar to the Rhone Valley, where a little known grape first began its journey.

Petite Sirah’s popularity will most likely continue if growers and consumers alike start to think outside of the box and help bring the grape out of obscurity by creating, attending, and drinking Petite Sirah at events, tasting, and food pairing opportunities. With renewed interest in the buying minds of the consumer to try something new, Petite Sirah does have a chance, especially with American’s new affinity to enjoy food with wine.