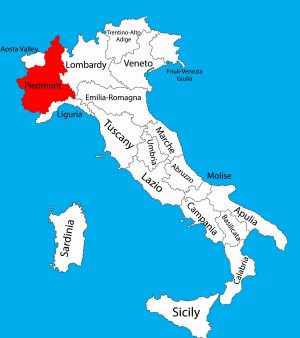 Piedmont: the Land of Barolo, Barbaresco, and Barbera

If you are like me and have not yet had the privilege of traveling to Piedmont (Piemonte in Italian and Piemont in Piedmontese) then discover Northern Italy’s premium wine region from three sisters and wine producers in Piedmont.

After you learn about the land of Barolo, Barbaresco, and Barbera you will likely want to add Piedmont to your post-pandemic travel bucket list.

Piemonte, located at the foot of mountains, “pie” stands for foot and “monte” for mountain. The name of the region perfectly describes its position at the foot of the Alps, which surround plains and hills on three sides.

The most important grapes grown are Nebbiolo, Barbera, and Dolcetto.  Barolo wine produced in the northern Italian region of Piemonte. It is made from the nebbiolo grape and is often described as one of Italy’s greatest wines.

Meet Three Sister Behind the Bottle

I was unable to attend Nebbiolo Prima 2021, but I got a taste at home after being introduced to Agricola Gian Piero Marrone – fourth generation wine producers in Piemonte. 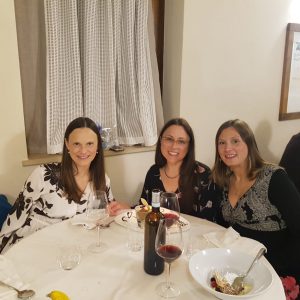 Hear from Denise Marrone of Agricola Gian Piero Marrone, in her own words, as she shares her story of three sisters working in a wine world historically dominated by men.

Fall in love as she describes her unique land that is Piemonte. Drool as Denise details a recipe from one of her family’s favorite traditional dishes.

It continues to be my honor and my privilege to be able to the taste wines and to meet and introduce you to the incredible women and men behind the bottle.

I hope to be in Piedmont in person one day, but for now we shall continue to consume from the comfort of our couch – with hopes of brighter days on the horizon.

“My Dad, minded man, was the first one telling me there’s no difference between men and women, and he taught me tractor driving and cellar activities.

I’ve always been proud of it, because I was the only girl child allowed to this activities…” – Denise Marrone Agricola Gian Piero Marrone 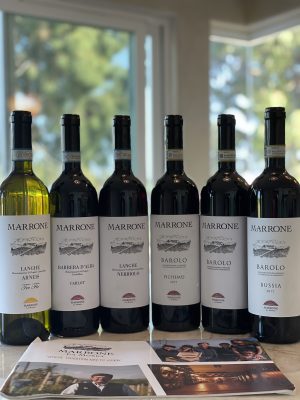 The Wine Line Up

“Pichemej” means in dialect “more than better”, the best wine he had in the cellar.” – Denise Marrone Agricola Gian Piero Marrone

Can you please share with our audience a brief history of your family winery?

Denise Marrone: For over a century: four generations of passion, tenacity and hard work. A story of tradition with a watchful eye on the future.

Pietro Marrone was born in 1887, in a family that already cultivated grapes for the production of wine. Very passionate and extremely ambitious from an early age, he wanted the family’s grapes to be the finest in the village.

In 1910, at the age of 23, he asked his father Edoardo if he could cultivate some vineyards using techniques that were revolutionary at the time: reducing production to prioritise higher quality and avoiding sowing wheat between the rows of vines, which was standard practice at the time. Naturally, the family’s grapes became the finest in the village and gradually all the vineyards were converted to modern cultivation practices.

Carlo was born in 1924 and, along with his brothers Paolo and Michele and their sister Mariuccia, helped his father Pietro to expand the company, both in terms of quantity and quality.

Unfortunately, the Second World War came along, bringing with it a forced period away from the vineyards and his loved ones. After the war, Carlo resumed his work in the vineyard and in the cellar with even greater passion than before. The wines became better and better, with some becoming “Pichemej” (“more than better”, in Piedmontese dialect), as Pietro liked to call them when they were really great. The farmhouse became more and more beautiful and began to become known in the village as “Cascina Carlot”, Carlo’s farmhouse.

Gian Piero was born in 1955. The wine gene had become part of the family’s DNA, passed down from generation to generation, so, when he finished high school, he devoted himself to the production of wines with the same passion as his father. Day by day, he made his dream – to present his wines all over the world – come true.

The time was ripe to plant native white grapes in the vineyards: Arneis, Favorita and Moscato, in addition to the red varieties Barbera, Dolcetto and Nebbiolo, and of course Nebbiolo for Barbaresco and Barolo.

Giovanna: affectionately known as “Mamma Giovanna” she is the heart of the family and especially for her granddaughters.

A reserved woman, of few words, you don’t always see her but that doesn’t mean she isn’t there. She is the one who “nourishes” everyone and not just because she is an excellent cook.

Valentina is the family’s oenologist; she works to achieve quality every day, with passion and tenacity.

Serena handles administration and foreign markets; she is the beating heart of the company’s organization.

Denise is the face that greets you upon arrival at the winery. Taking care of hospitality, she is aided by her mother Giovanna in the kitchen and by a dynamic and highly skilled staff. She also takes care of the German-speaking markets.

Marco, Serena’s husband, has been part of the family for many years now. He handles some of the company’s most important export markets, such as the Netherlands, Belgium, America and China.

Tell us about the unique region your wines come from?

Denise Marrone: Piemonte holds in its name the reference to the conformation of the region, located at the foot of mountains: “pie” stands for foot and “monte” for mountain. The name of the region perfectly describes its position at the foot of the Alps, which surround plains and hills on three sides.

The toponym – from latin Pedemontis – was probably used for the first time in the early Middle Ages but back then it did not correspond to any administrative nor political territory.

In fact, the first native tribes of the region where called Liguri and even during Roman times, that was the word used to identify the entire land between the sea and the Alps. Today, Liguria, is the name of the narrow region that stretches from the French border to Tuscany, facing the Mediterranean.

Over time, the mountain-range called Appennines, became the natural political and administrative barrier between the coastal region of Liguria and the mainland called, finally, Piemonte.

What makes Piemonte so unique and what types of wines are produced there?

Denise Marrone: A complicated and fascinating geological formation of Piedmont can be considered as the real treasure of the region. The former sea and the consequent floods, erosion and earthquakes gave birth to a unique yet special soil composition.

The prominent wines of Piedmont as well as the pungent aroma of white truffles find reason to exist because of the soil formation, along with other factors.

In this gorgeous land the most important grapes grown are Nebbiolo, Barbera and Dolcetto, well known around the world for their quality, always increasing thanks to the climate change and the new techniques adopted in the fields. As well as white grapes, as Favorita, Arneis and a couple of international grapes taking good place, as Chardonnay and Viognier.

Break down the differences between Barolo, Barbaresco & Barbera?

Denise Marrone: Barolo is the king, not just for its history, but because it has so much power and so much structure that needs respect and long time to age and be really what it has to be. And for us Barolo is traditional, blend of 2 different vineyards as it has always been in the past: Bussia and Ciocchini, to permit us to show as much as possible the potential of our territory.

Barbaresco is always part of the beautiful Nebbiolo family, just smoother sensation, with those rose petal hints and pepper.

Barbera is another history, deep red color, and fruity, and powerful in a country style way, mouthwatering if you imagine it with bread and salami!

What are some of the advantages you think three women (all sisters) bring to the wine industry (historically dominated by men)?

Denise Marrone: We’re a particular family in the wine world, because we’re almost all women. We’re proud of it, and our history comes from far away: my grandmother Rita, she has always been the pillar of the company.

I spent all my school holidays with her in the fields, and she taught to me all I know about vine growing and country life… it was a slow life of hard work, which I miss a lot… and it was women jobs, the men were occupied in something else, like tractors… my dad, minded man, was the first one telling me there’s no difference between men and women, and he taught me tractor driving and cellar activities, and I’ve always been proud of it, because I was the only girl child allowed to this activities…

I myself opened the doors to my sister Serena, and she’s today the most important one for the export sales. And the one who’s really having hard life is my sister Valentina, woman wine maker in a men world, where everything’s difficult and heavy…but she has great satisfaction, making higher quality every year passing, and all the compliments about the wine quality are hers.

I have a daughter, Martina, and two nieces, Sofia and Alice, and I hope one day they will follow our paths, developing our wine culture and passion, with this more feminine touch…

Which wine represents each of the three sisters? 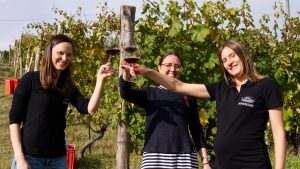 Denise Marrone: Valentina of course is the Barolo, she knows everything and she’s really the mum of the wines, always in search of a way to make everything better and in love with her vineyards and her barrels.

Serena is Barbera Superiore, she loves this wine since she was a little girl, sipping a spoon of it with grandfather Carlo while telling stories before bed.

Denise is Nebbiolo, never in balance, always waiting for something more, with bitter notes but great hidden potential.

Will you share a family recipe to pair with the one of your wines?

Denise Marrone: Definitely TAJARIN with meat sauce, one of the most representative dishes of our land, what we like to have for lunch on Sundays!

INGREDIENTS FOR THE PASTA

–  Combine with a fork all the ingredients in a bowl, then, move the dough on the table and work it with your hands for 10 minutes

– Flatten the dough and roll it in order to obtain thin layers and cut with the shape and the thickness you prefer (Tagliatelle, Tajarin, Pappardelle)

– Cook in boiling water with salt for 4/5 minutes

INGREDIENTS FOR THE MEAT SAUCE

– When onions change their colour into gold, add the ground meat

– With a wooden spoon, stir and chop the meat in order to obtain small pieces and to let it brown completely. It has to be nearly caramelized.